On The JP In The BJP

JP gave the BJP legitimacy, and lived to rue it. But, even now, they can't let him be. 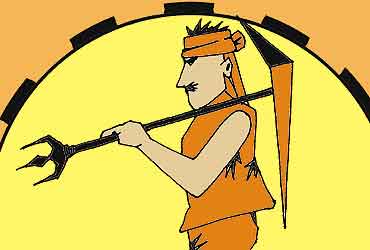 illustration by Sandeep Adhwaryu
Kuldip Nayar November 10, 2003 00:00 IST On The JP In The BJP

I wasn't surprised to hear the BJP was celebrating the birth centenary of Jayaprakash Narayan at its Delhi HQ. During the Emergency, the RSS, the party's mentor, had even included Mahatma Gandhi's name in its prayers. It was probably embarrassed that the person whom JP literally worshipped didn't figure in its morning and evening invocations. Even otherwise, the organisation had by then realised that Gandhi went down so well with the masses it could ill afford to skip him. The RSS move was born out of necessity, not conviction. (Till today, Gandhiji's portrait finds no place among the array of photos displayed at the RSS headquarters in Nagpur.)

By now, it's evident the BJP is desperate to widen its base as it enters an election year. Hence the appropriation of JP, who fits well into the RSS line of thought—a tall Hindu enshrined in the pantheon of the Sangh parivar. The BJP's problem is that its own icons have lessened in appeal, attracting only a particular category of voters. Vir Savarkar and Shyama Prasad Mookerjee, the BJP's two heroes, don't bring much to the table other than the party sentiments of Hindu nationalism. This is of little help while entering unchartered, yet-to-be-saffronised territory. They needed someone whom the liberals could relate to. Hence JP. There's also an added bonus: the BJP has the vicarious satisfaction of rubbing shoulders with those whom it respects in its heart of hearts.

JP's clothes of secularism, though, will not fit the party. It will look ill-suited on them, as it did in the '70s. Then the party was called the Jana Sangh. JP had admitted it into the Opposition combination fighting the authoritarian rule of the then prime minister, Indira Gandhi. JP was conscious that the Jana Sangh was a political arm of the RSS, but he was given to understand that the two would part company. It was an undertaking of sorts.

After the birth of the Janata Party, which JP constituted, he insisted that the Jana Sangh members, who occupied positions in the Janata Party and in government, sever links with the RSS. He knew the role it had played in Gandhiji's assassination. Nathuram Godse, who shot the Mahatma, had been an RSS worker. The plot had been proved, the RSS banned. In fact, its chief M.S. Golwalkar had also been arrested. He was released after a year or so on the assurance that the RSS would not get into electoral politics. (Fifty years on, it's busy selecting BJP candidates for the state assembly elections in MP, Rajasthan, Chhattisgarh and Delhi.)

The undertaking on the RSS turned out to be just a ruse to join the ruling combine. JP's reminders to Jana Sangh leaders to make good on the promise had no effect. How could they have when the Jana Sangh itself was an RSS creation, with the avowed aim of creating a Hindu rashtra?

Initially, the Jana Sangh members tried to explain to JP that the RSS wasn't what it was made out to be. When it came to the crunch, they refused point-blank to break ties with the RSS. JP felt cheated. But by then he was too sick, and could hardly go to the people to expose the Jana Sangh. He did make it public, though, that he had been let down.

When the Janata Party finally did rake up the dual membership issue, the Jana Sangh members preferred to walk out. They later morphed into the Bharatiya Janata Party. Curiously, by that time, they had also acquired the credibility which the Jana Sangh, now the BJP, had not managed even after 30 years of Gandhi's assassination.

The two-year stay in the Janata Party and the portfolios they held in the central ministry helped the BJP immensely. On the one hand, it got an opportunity to saffronise the staff there. The information and broadcasting ministry is a prime example, with RSS-honed people still running it.The BJP also inherited a positive tinge which confused the Hindu intelligentsia—what with its tallest leader, Atal Behari Vajpayee, doing a balancing act riding two horses at the same time. Ayodhya, plus all these factors, percolated down to the BJP's winning 181 seats in the last general elections against the party's usual single digit tally. After that, even JP's followers found alibis to join hands with the BJP in the NDA so as to stay in the driving seat.

Deputy prime minister L.K. Advani, who presided over JP's birth centenary celebrations, now rubs out the differences between the political BJP and the ideological RSS with thoughts like "the ideology of the BJP or the RSS has been a unifying factor for the nation". Yes, he's done everything to "unify" the nation, the most significant of which was the rath yatra he led through northern India, dividing in its wake Hindus and Muslims who had lived together for centuries. He is so satisfied with the results—never since Partition has there been such large-scale rioting as was witnessed then—that he equates the rath yatra with Gandhi's Dandi Salt march, truly a comparison of the ridiculous with the sublime.

Some day, Advani's real role in the destruction of the Babri Masjid—a structure which came to bear the weight of India's credo of coexistence—will come out as clear as daylight. A woman Indian Police Service officer, deputed to protect Advani those days, has deposed before the Liberhan Commission on how he instigated the kar sevaks. More would have come out at the Rae Bareli court if the CBI had not withdrawn the conspiracy charge against him.

It's true the BJP today 'needs' JP's name. But in the bargain, is it right for it to—unwittingly or not—crucify the person who willy-nilly gave them credibility? He had realised even then that he had made the biggest mistake of his life in trusting them. The least the Sangh parivar can do is not drag his name into its communal vitriol which is sure to sharpen as the polls approach.

Do Skeletons Have A Soul?