On His Biotic Metal Train 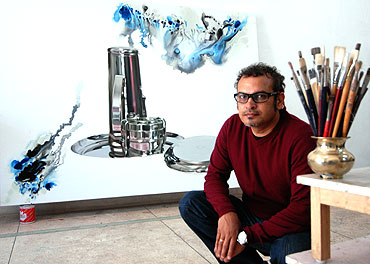 Leading foreign collectors, including the owner of Christie's and the head of Louis Vuitton, have paid astronomical prices for Subodh Gupta's works in the last three years. Just last month, two of his works went for Rs 1.86 crore and Rs 82 lakh-well over their reserve price-at a Sotheby's auction in London. Some recent sales:

He is possibly the biggest thing in Bihar art and culture since Nalanda. In the last few years, he has been lionised at major international art fairs and biennales, his work sought by leading international collectors, and selling at prices overtaking those commanded by eminences like Souza, Husain and Raza. It would probably be no exaggeration to describe Subodh Gupta as the Indian artist who enjoys topmost billing today in international art circles.

What is it about Gupta (b. 1964) that makes international art connoisseurs vie for his work? Described as the "Damien Hirst of Delhi" and hailed for his rare ability "to distil the global from the local", it's arguably the sheer audacity and inventiveness with which he transforms ordinary, everyday objects into compelling works of art. Recently, Gupta unveiled his latest work: Gandhi's three monkeys that hear no evil, speak no evil, see no evil. In his hands, they are recast into massive apocalyptic visions. Each 'monkey', weighing about 800 kg, is cast in bronze to resemble monstrous harbingers of war in a combat zone, but with a characteristic Gupta twist. Hence the speak no evil monkey wears a gas mask, cast entirely of waste domestic utensils, and welded into a huge proboscis. As a monumental vision of our times, these monkeys overturn the Mahatma's message of ahimsa. 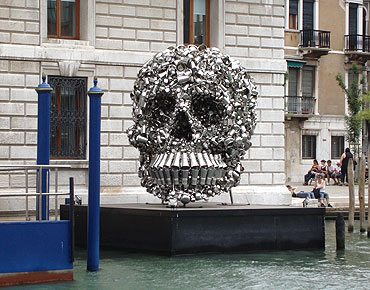 The grinning skull of A Very Hungry God

Gupta is a homespun figure in the art world, who also has his finger on the pulse of politics and issues of class and social mobility. A few years ago, at a circular viewing space in Delhi, he laid out a large installation of stainless steel utensils—the glass, katori and thaali all placed around a seated fibreglass cow. On a closer look, in the shining melange of utensils lay the katta, or homemade country pistol. Laloo's Bihar with its stupendous fodder scam, the rough laws and street violence of the bimaru states, and Gandhi's impassioned position on the cow—all revealed themselves. In the nascent field of installation art in India, Gupta had created a powerful new language.

Since then, his confident handling of his medium, like his international stature, has only grown. Gupta uses symbols of pre-modern or low-tech India—neem twigs, cowdung pats, cycles and scooters cast in bronze—as well as huge, shiny stainless steel buckets and kitchen racks, which speak of evolving aspirations in an India on the brink of its encounter with globalisation. At the Palazzo Grassi at Venice in 2007, Gupta's Very Hungry God—an enormous grinning skull, made entirely of kitchen utensils—was suspended above a canal, creating a maelstrom of interest. It was bought by French billionaire Francois Pinault, one of the owners of Christie's. Recently, Gupta also created an entire conveyor belt of luggage—bundles, boxes tied with string, and trolleys, all cast in bronze and, like the real thing, trundling through space. It sold to a German collector for Rs 4.5 crore.

Gupta's work is as much a reflection of his own place in a rapidly changing world order, as of India's location in it. Born in Khagaul, Bihar, he grew up in a joint family home near the railway tracks. His father, a railway guard, would travel in the cargo van, surrounded by rope-tied bundles and baskets of fish or fruit. The long whistle of the train was the signal that the 'shuttleva' or the 'passengerva' had rolled into the station, and that his father would soon be back home. Subodh's father's death when he was 13 would have compelled some difficult choices, but he decided to be an artist. He started by drawing Ram, Sita, Hanuman from calendar images, and became deeply involved in acting, singing as well as painting sets and posters for a Bhojpuri theatre company which toured nearby towns.

After Patna Art College, where he complained of "no library, no education", Gupta came to Delhi. From 1988 to the mid-1990s, in the then torpid and limited art market of less than half-a-dozen galleries and hardly any collectors, he struggled. A significant break came when he turned on his own body as the subject of art. 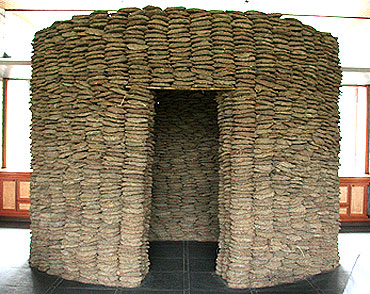 Open art: My Mother and Me (1997), is an installation of cowdung pats

In 1999, Subodh Gupta painted a self-portrait. On the canvas, his face was inset in a field of cowdung, mimicking the 'gobar ka lep' that village households still use. Underneath, little lights like those on a roadside juice stall illuminated the name 'Bihari'. This was followed by his iconic video work called Pure (1999), where the artist enters a small white-tiled bathroom for a shower. What begins as a sensuous bath changes when instead of water he is slowly covered by cowdung. Covered with the stuff, he makes his way out of the flat to the lift. The work powerfully conveyed the differing concepts of purity in modern urban contexts and traditional ritualistic ones, and the contrasts between economic and cultural life in the village and the city. Subsequently, he made a huge installation of cowdung pats and called it My Mother and Me (1997).

If Gupta's pots and plates don't look like the conventional material of art, the questions that his art addresses nevertheless straddle important and recently-debated issues—questions of the local and global, of migration and hybridity, of low-tech versus high-tech. In fact, a recurring theme in his sculptures and paintings is the question of migration. Gupta uses the familiar means of Indian transportation—the cycle or scooter weighed down by the doodhwala's milk pails, or the Ambassador car—that for many Indians are the first signs of the engagement with modernity. The bronze-cast gharti or bundle tied with string is another iconic sign of mass migration that appears in his works—migration out of the village, to the city, to the Gulf as labour, and then back again. Most recently, utensils conjoin to create highly abstract concepts. In ufo (2007), hundreds of brass lotas are welded together to create an unlikely space object. In Gupta's hands, the Indian kitchen has delivered a cornucopia of possibilities, which he effortlessly universalises and raises to the level of high art.

(Gayatri Sinha is an art historian and critic)

The Kilo Is Heavier