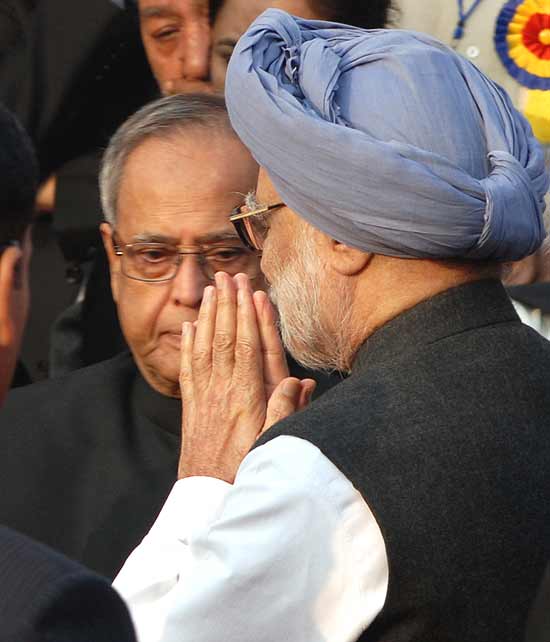 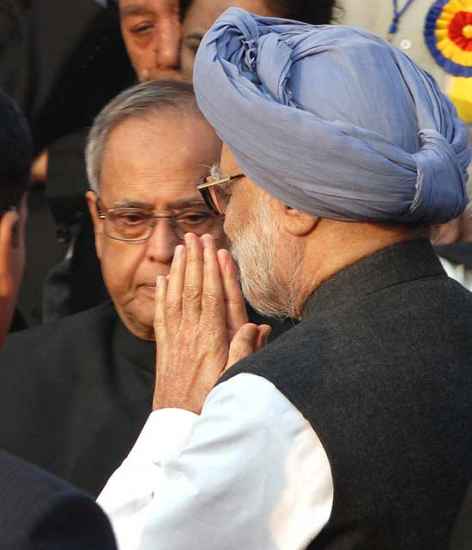 A slightly stunned nation watched mutely as the Union cabinet first cleared foreign investment in multi-brand retail last week, then let allies and the Opposition bully it into putting it off within days. Now the big question everyone’s asking is: how many calls can the government put on hold simultaneously before the assembly elections in UP and elsewhere? Will its lines of communication with the ‘business community’ completely wear out by 2014?

The rollback—for that is what it is really—is being dressed up lamely as a nod to consensus-building. But the truth is, the government is facing a serious crisis of faith, with its ability to pursue economic reforms swathed in doubt. There are 32 bills pending in Parliament at the moment; only one of them has been introduced so far during this session. Another 23 draft bills are slotted for introduction, according to think-tank prs Legislative Research. Each bill betokens radical change (‘reform’) in the economic and political landscape—from food security and money-laundering to electronic delivery of services, biotechnology, warehousing, mines and minerals, nuclear energy and national highways. None of them are really non-controversial.

Yet, when FM Pranab Mukherjee announced that FDI in retail has been “suspended” until political parties and states are brought on board afresh, both the treasury and Opposition benches applauded. An embarrassing climbdown for a government seeking to rekindle hopes of reforms making a comeback. And an embarrassing epilogue for PM Manmohan Singh’s career as a ‘reformer’.

“It’s an anti-Cong wave. Whatever the political line behind it, the Congress doesn’t seem to have even consulted allies....”
A.K. Shiva Kumar, NAC member

“The proposal on FDI in retail has gone into a tailspin. There’s no saying what will happen to it. If other pending reform proposals are accepted, that may mitigate the impact,” says ficci secretary general Dr Rajiv Kumar. Ostensibly, the pull-back is a victory for the common man, but its impact is likely to be felt on many other pending legislations. FDI’s opponents included not just the Left but the BJP, and also UPA allies like the tmc, DMK and even Congress governments in some states. They all fear the impact big foreign retail could have on the small trader, the family living off its corner store, the small farmer, and the once-rural family that moved to the city and is now dependent on the kirana store for a living. “The proposal would have encouraged widespread land acquisition for contract farming, hoarding of farm produce by cold storage providers, anti-competitive pricing by multinational retailers and cheap imports from China,” says CPI(M) general secretary Prakash Karat.

That could well be, yet it would be hard for any government to find a legislation that does not adversely impact some section of society. India has 550 million farmers, and 80 per cent of them are small or marginal land-holders, most of them deeply in debt. There are less than 50 million industrial workers now. The ambitious plan is to create 220 million new jobs by 2025, but that target seems impossible to achieve. 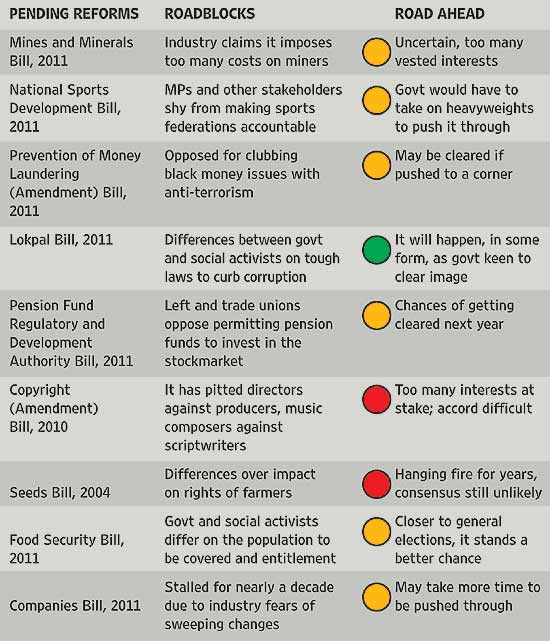 “Whether widening roads or linking pension funds with stockmarkets or changing food security entitlements, there will be winners and losers,” says Chengal Reddy, secretary-general, cifa, a collective of farmers’ associations that supports FDI in retail. “The current system is also extremely exploitative of farmers, which is why they migrate to cities. At least, FDI would have given them a chance to control retail prices,” he adds. Farmers groups supporting FDI in retail agree the decision comes with the risk of hoarding, just like raising the FDI cap in pensions could be risky too. But that is no reason why people should be denied a chance to choose, contends Reddy.

Experts point to the fact that the current economic situation is also very different from ’08, when the government could afford to give an economic stimulus package, including a Rs 60,000 crore farm loan waiver and Rs 300 crore sop for industry, to keep economic growth on course. This time, if the Euro crisis worsens, and as subsidies balloon, indebted farmers and industry are in it alone.

The other issue is: can protecting small industry deliver India’s much-vaunted 9-10 per cent GDP growth? Big players, both domestic and international, will be needed. “In India, take any business... companies never innovated till FDI and competition were allowed,” says Arvind Singhal of ksa Technopak. This holds true of cars, phones and domestic organised retail, which has been accused of plucking low-hanging store-front fruits rather than investing in the supply chain from farm to fork. FDI in multi-brand retail was expected to infuse funds, bring in managerial, technical and logistics know-how to complete this retail-industry-farm chain which has so poorly served customers and farmers so far.

The irony of the situation is not lost on small industry either. Though they do contribute to a large chunk of exports, employment and GDP, only a small creamy layer of small business can be said to have “matured”. “Small business clusters everywhere get the worst roads, the worst water supply and erratic power, not to mention being the most polluting,” says Anil Bharadwaj, director-general of the small business lobby group fisme.

Theoretically, one could say the government could turn to doing all it didn’t do till now for farmers and industry, provide cheap credit, curb middlemen margins, ensure cheap transportation and eliminate red tape. But the fact is, the one practical step it had in mind, which might have filled in some of India’s infrastructural gaps, has come a cropper—and it can’t even blame it on any anti-globalisation wave. “There are fringe movements like Occupy Wall Street which oppose globalisation abroad, but in India, people are anxious for change,” claims ficci’s Rajiv Kumar. Development economist and nac member Prof A.K. Shiva Kumar adds, “There’s no anti-globalisation wave here. It is an anti-Congress wave. Whatever the political instincts behind it, the Congress doesn’t seem to have consulted even its allies...that’s worrying.”

“India is anxious for change.... But the FDI in retail proposal is in a tailspin. There’s no saying what will happen to it.”
Rajiv Kumar, FICCI

It really is. As the finance minister said in the LS, the economy is in a “difficult situation” due to slowing growth (below 7 per cent past quarter), stubborn inflation and dwindling coffers. “I do believe things can improve if institutions are strengthened, if Parliament functions, if this House debates, discusses and decides issues— for which it is meant—you will see the atmosphere will change,” Pranab Mukherjee said.

But even debate in Parliament is no quickfix right now. Parliamentarians cannot even agree on whether the decision to clear retail FDI, taken by the cabinet, can in fact be debated in either house. This will not be resolved quickly, a senior Congress MP says on condition of anonymity, unless the government decides to bring FDI in through a bill.

“The expectation was that FDI will give retail players fresh capital for expansion of the sourcing chain. The optimism created by this expectation will now go down slowly,” says Gautam Duggad, a research analyst with Prabhudas Lilladher in Mumbai. In a note to investors, the financial advisory firm said that evolving a consensus for FDI in retail is cumbersome and will be “a drag on the sector”.

“We react intuitively in India even when we must respond logically,” says nac member N.C. Saxena. “I did think retail FDI would help consumers and farmers...it would be better for many than the present system,” he adds. The question is not whether small businessmen or farmers can be protected—the perception is that precious little has been done for them anyway so far. The issue is how prosperous can small businesses and small farms make India: can they ensure 9 per cent growth in 2012, especially given their persistent neglect? Given the mood, few trust the government to do now what it should’ve done yesterday.

But The Forbidden Apple Doesn’t Taste Like An Apple!