On Either Side Of The Hooghly

In Calcutta, public interest gets a boost from the courts thanks to a 54-year-old CA 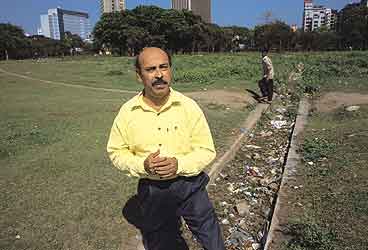 outlookindia.com
-0001-11-30T00:00:00+0553
Sometimes even the mountain bows to Mohammed. After what seems like ages, the Calcutta Corporation is cleaning up the sprawling Brigade Parade ground. But it still took a pil to force the authorities to act. If the grounds look well-tended henceforth, then the citizens of Calcutta owe thanks to Subhas Dutta, better known in certain circles here as the poor man’s Ralph Nader.

The 54-year-old chartered accountant has a special knack for pulling up the administration for its failures. Be it environment protection or preservation of historical sites, Dutta’s a formidable watchdog. No wonder that officials run for cover when they learn he’s on their case.

In recent years, Dutta has totted up a formidable ‘record’ espousing major causes. He has been party to over 50 pils demanding protection of the historic Botanical Gardens and Victoria Memorial. Flood prevention, protection of wild elephants, tree-felling, automobile emissions...the list is never-ending. Verdicts have mostly gone in his favour though Dutta maintains "a pil is not about victory or defeat, it’s about making the people more conscious". In fact, he’s rather modest describing himself as more of a "social activist". It was through his efforts that the Calcutta High Court set up the first official green bench in the country—to deal with environmental problems.

Unlike most others, Dutta does not believe in looking the other way. Once he identifies a problem, he chalks out a campaign, collects facts, prepares a case and argues it out on his own. All this with little financial help. "With each verdict, he helps improve our lives," says a Howrah neighbour. Dutta started his efforts with the Howrah Ganatantrik Samity (HGS), set up in 1977. It started off as non-political, which was fine by him, but later he had to part company. However, it still supports some of his efforts.

It was while tackling Howrah’s civic problems that Dutta first took up public causes. It wasn’t easy. Far from being applauded for his efforts, he’s had to see some tough situations. "I have faced threats in Darjeeling, in Howrah, at Arambagh, for opposing tree-felling. In Howrah, some people even concocted an attempted murder charge against me," recalls Dutta.

The Botanical Gardens issue— with the rampant tree-felling, theft of rare plant specimens (around 30,000-odd varieties are seen there), anti-socials activities etc—had become a problem even with security personnel around. Dutta filed a pil, forcing the authorities to act.

Stranger still is the case of Brigade Parade ground, Calcutta’s lungs as it were. As Parta Samaddar, who’s stopped going for walks there, recalls wistfully, "It used to be a charming place...those endless green lawns far from the madding crowd." But that was years ago. By the time Dutta stepped in, at least 250 trees in the maidan had been felled. Politicians only added to the degradation. As Dutta points out, "They hold rallies here, and I counted at least 750 spots where refuse had been burnt; plastic cups and bags, bottles, paper, even household garbage choke the drains which overflow during the monsoon. Clothes are washed in the waterbodies, people relieve themselves in the open, cars use the greens for parking space and the grass dies out. It’s as if nobody cares. What are the state government and the defence authorities which manage the grounds doing? I made the police commissioner, chief secretary and mayor along with the defence authorities parties to my suit. " In the days to come, the Brigade ground will hopefully look that much better for it. To find out more about Dutta’s work, contact him at: Subhas Dutta, 25/1 Guitindal Lane, Howrah Town, West Bengal. Ph: 033-26603526.

The Lord Of The Rings: The Two Towers