On Dubya, Don And Condylitis 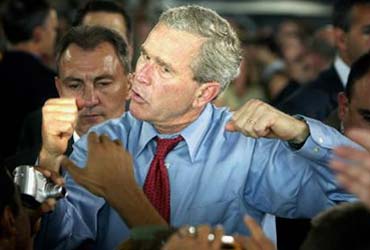 State Of Denial—Bush At War Part III
By Bob Woodward
Simon & Schuster Pages: 560; Rs: $20
"Rumsfeld is a dick." The verdict of a senior army intelligence officer given the task of finding Saddam Hussein’s elusive weapons of mass destruction as the US army invaded Iraq in 2003. It doesn’t really matter whether you think it’s true or not, or whether it’s fair to the US defence secretary Donald Rumsfeld. What makes Bob Woodward’s State of Denial such an enjoyable read is this kind of unvarnished view from the inside, during America’s most traumatic period in 30 years.

It’s worth pointing out that Woodward has taken a fair amount of flak over the years for his reporting on the inner workings of Washington; but no one’s ever accused him of being a good writer. His prose clunks over these pages with all the elegance of a pair of hobnail boots. However, it’s not the style but the substance that makes his books bestsellers. He is a master of pulp non-fiction. This volume is subtitled ‘Bush at War, Part III’ but you don’t need to have read the first two to make sense of this one. Parts I and II dealt with the process of invading Afghanistan and Iraq post 9/11 and you felt Woodward was getting access to the top players because they wanted to make sure history properly understood their role in the wars. Woodward was accused then of lauding the administration. This time both the president and the vice-president declined to be interviewed. And those who did talk, on and off the record, now seem to want history to record that the terrible mess in Iraq was not, well, their fault.

But no one emerges unscathed. The champions of the war from the neoconservative right come across as obsessive ideologues stubbornly prepared to sacrifice everything in the pursuit of their dream of remodelling the wider Middle East. And the liberal conservatives in the administration, who went along with the Iraq invasion reluctantly, appear too weak to stand their ground and tell the President that he’s dragging the country towards disaster.

Of course some come out worse than others. Rumsfeld is portrayed as a megalomaniacal, pedantic bully who equates a difference of opinion with disloyalty. The book argues that his micromanagement and compulsive practice of burying his staff in demanding memos nicknamed ‘snow flakes’ brought an already disorganised defence department to a grinding halt. The fact that the planning for the post-war scenario doesn’t seem to have started with any real unified coordination until just weeks before the war seems bad enough; but then its leadership team tells Woodward they were woefully understaffed, underfunded and under constant assault from the neocons to get their people in key roles regardless of their suitability.

Rumsfeld, however, isn’t the only one now in Woodward’s firing line. Both the President and his then national security advisor Condoleezza Rice come in for withering criticism. The most damning allegation against Ms Rice is that she did not take seriously urgent pre-9/11 warnings from George Tenet, director of the cia, about a possible attack on mainland US. The book says she effectively gave him and his counter-terrorism chief Cofer Black "the brush off". But the biggest volte-face comes with the portrayal of George Bush. He goes from a steadfast Commander-in-Chief in parts I and II to a man so blinkered by his own self-righteousness that he will stay on the same disastrous path even if only the first lady and his dog support him. Woodward also depicts a man not strong enough to control the egos of the people he has chosen to surround himself with, particularly the defence secretary. Woodward reports that when Rice complained to Bush that Rumsfeld wouldn’t return her calls, the President just "teased" him playfully that "I know you won’t talk to Condi but you’ve to talk to her".

Some commentators believe Woodward’s re-evaluation of the White House team is just a cynical journalist burning up used sources. But others suggest his transition reflects the road trodden by much of mainstream America. At first assured of their right to attack Afghanistan after 9/11, then persuaded of the need to invade Iraq to protect themselves from wmd-toting terrorists and now convinced they’ve been misled into an unwinnable war that’s taking too many of their nation’s young lives.

The White House has dismissed the book as "like cotton candy, it melts on contact". But with midterm elections looming, the fact that State of Denial is in its third reprint suggests the Americans may have developed the kind of sweet tooth Republicans might find painful.