His money maketh him the man for the BJP in 2014. Period. 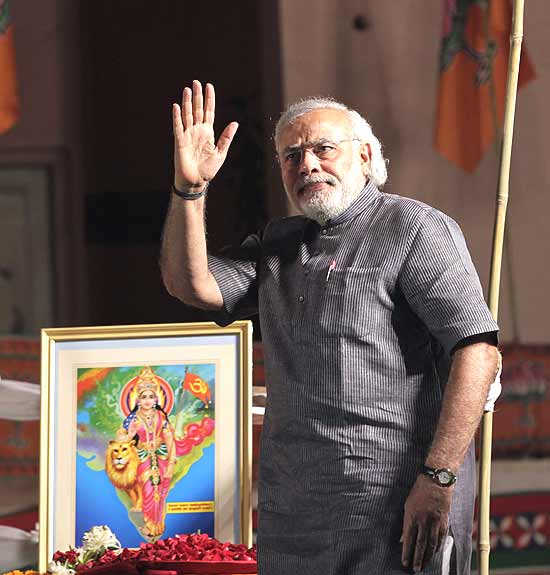 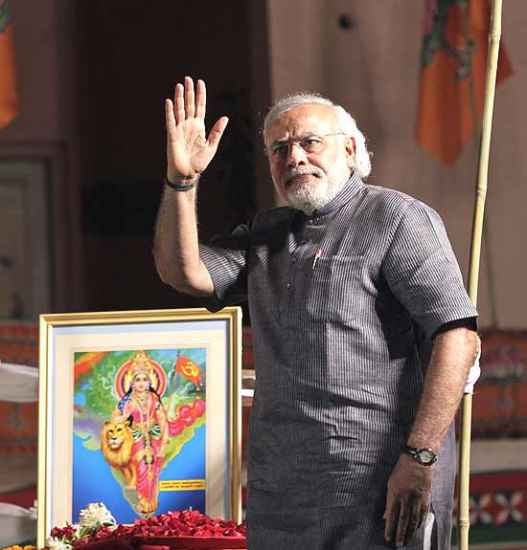 In his home state of Gujarat, Narendra Modi is projected as omnipotent, omnipresent. In the last assembly elections held in December 2007, Modi masks were distributed at every public rally he addressed. It made quite a sight: the leader strutting on stage and followers in masks bobbing up and down. Together, they seemed a cult. Modi’s been all-powerful in the Gujarat citadel since 2001. By the end of this year, he’ll face another election in the state that most political observers expect him to win.

Presuming that he crosses that bridge, he’ll then walk the national runway as the BJP’s prime ministerial face for 2014. Project Modi has already been noisily launched at the BJP’s national executive in Mumbai on May 24-25. It is being planned by Modi, executed by Modi, with strong support from corporate India, say sources. The RSS has capitulated before the sheer determination and ambition of the man because he is today the main financial lifeline for the party and parivar. He also excites the cadre across the country, even as he remains a great polarising presence in a national election.

The back story to Modi’s rising stock is the fact that, in an age of dwindling finances, it takes a lot of money to fight a Lok Sabha election, and he is best placed to finance his own prime ministerial campaign. All the captains of industry have been hailing his leadership at successive Vibrant Gujarat functions. Ratan Tata: “One really has faith in Mr Modi. If he were to say this will be done, it will be done.” Mukesh Ambani: “The world is taking note of Gujarat’s model and your flawless execution. Gujarat is blessed to have an inspiring leader like you. All I can say is thank you.” Sunil Mittal: “If there is a CEO who can lead this country, it is Narendra Modi” Anil Ambani: “Narendrabhai is the next leader of India.”

This backdrop of huge corporate support is crucial to understanding the timing of the unveiling of Project Modi. When the economy is reportedly shrinking and the mood downbeat, he’ll be positioned as the saviour of the urban middle class. The strong Leader who sees himself as a Gujarati version of Singapore’s Lee Kuan Yew, the authoritarian leader who oversaw its emergence as an Asian tiger economy and stepped down last May. Lee has an excellent relationship with the Gujarat CM who’s visited the Southeast Asian nation several times.

An authoritarian, business-like model for a chaotic, heterogeneous country like India? Achyut Yagnik, author of The Making of Modern Gujarat, has no doubt that Modi will win his home state again, “although with a reduced margin”. This, he explains, is because Gujarat is one of the most urbanised states of India where 44 per cent of the population lives in towns. “The Gujarati middle class hero-worships Modi and has been a source of his strength. But can he appeal to the middle class elsewhere? And what of the BIMARU states where people live in villages? What appeal will Modi have there?”

Sources in the RSS say their decision to project Modi is based on the assessment that the BJP wins elections only when it projects a leader. It has happened with Atal Behari Vajpayee. And with several strong chief ministers in the party. The most recent lesson came from the round of assembly elections where the only state the BJP won decisively was Goa where it had an appealing leader like Manohar Parikkar. For the record, however, RSS spokesperson Ram Madhav says that “no decisions have been taken, to the best of my knowledge, and in any case, the RSS does not dictate anything to the BJP”. BJP spokesperson Rajiv Pratap Rudy, on the other hand, says that “although no formal decision has been taken, it is felt that we need to project a leader. A common worker needs a name he or she can work for. We can’t take nine names.”

Modi would not have any face-saving way for Sanjay Joshi (Above) to leave. He insisted on a humiliating exit for him.

But have the other leaders in the BJP acquiesced and reconciled themselves to life under Modi? Many old-timers are in denial and off the record say that politics is full of twists and turns and Modi cannot write a final script now. L.K. Advani and Sushma Swaraj did absent themselves from the Modi-dominated rally in Mumbai. Yet, because Modi does not forgive easily, people are wary of saying anything that appears to even mildly question the recent sequence of events. Party sources reveal that Modi had sent his security in advance but refused to find a face-saving way to out former general secretary Sanjay Joshi from the meeting; he insisted on a humiliating exit for him. Party president Nitin Gadkari eventually called Joshi at 1.30 am and asked him to depart from the venue. Gadkari reportedly said he had no choice in the mater.

BJP insiders now say that Modi has silenced all his critics with his money. He has bullied the RSS, treated them “like trash” in Gujarat, yet he has sent funds to Nagpur. “Why has the RSS suddenly decided to succumb to him?” asks a party insider. “The real reason is that he has the money. All the other financial pipelines, such as those provided by Y.S. Yediyurappa and Arjun Munda in Jharkhand, are drying up and limited to funding a select few BJP leaders. Shivraj Singh Chauhan still finances the Sangh’s projects but Madhya Pradesh revenues are nothing compared to Gujarat’s. And after Pramod Mahajan’s death, no one can counter Modi’s financial clout.”

K.G. Suresh, who heads the Global Foundation for Civilisational Harmony and is a close observer of the Sangh parivar, believes that the line is very clear. Modi is the man. “The cadres respond to him and the RSS feels that in order to take advantage of the bad state of the Congress, the cadres have to be motivated first,” he says. Moreover, Modi is an obc, unlike the other national leaders of the BJP, who are Brahmins. Besides, adds Suresh, “The RSS knows that it will be a make-or-break general election. In the old days of Vajpayee, Pramod Mahajan generated the funds for a national campaign. Now, only Modi can do that.”

The question of NDA allies objecting has obviously been factored in. Sources in the BJP say there is no doubt that Nitish Kumar and the JD(U) will walk out of the alliance were Modi to be at the helm of affairs. JD(U) leaders confirm this and spokespersons too have said so on record. But Modi-backers argue that the AIADMK under Jayalalitha will be a big force and she has an excellent working relationship with Modi. All of this, of course, is built on the assumption that Modi will galvanise a disenchanted middle class across the land. Right-wing commentator Swapan Dasgupta thinks so: “I see him as a mix of Lee Kuan Yew and Vladimir Putin.”

Of course, one can’t forget that Vajpayee always believed that Modi and the Gujarat riots lost him the 2004 general elections. And subsequently, there has been no evidence of Modi improving the BJP’s results in any part of India where he campaigned in 2009. In that year, Modi had addressed 300 rallies, and the BJP won 37 seats in those parts. Rahul Gandhi addressed 102 rallies where the Congress got 75 seats.

By 2014, though, the Congress could be battling great anti-incumbency and Modi could face a different national mood. Yet, there is also the possibility that his appearance on the national stage might divert certain votebanks towards the Congress. This could indeed happen with minority voters, who are currently disenchanted with the Congress and settling for secular regional parties in their states. If Modi has to be battled, the scattering Muslim vote of the Congress could reconverge behind the national party.

But should Modi be the star act on the BJP ramp in 2014, he would like to write a script about his role as the great development man, the leader who acts decisively, someone who can help the creators of wealth make more money, a role model for the aspirational middle classes. Within the boundaries of Gujarat, he has been able to turn every attack on him, all the riot cases, to his advantage. And it must be stated that he is not out of the legal loop in those cases. The man thrives in adversity and has a burning ambition to prevail. He has already done so over the RSS and has silenced his detractors within the BJP. His project for himself has begun.