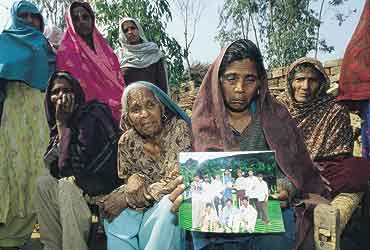 outlookindia.com
-0001-11-30T00:00:00+0553
Sport is infamous for spawning rivalries. But amidst the yellow mustard fields in this tiny swathe of western Uttar Pradesh, an innocent game of cricket has turned into an ugly caste battle, with horrific consequences. Barely two months ago, two Dalit youths from Santagarh—a small village near the sprawling town of Saharanpur—were brutally mangled to death in broad daylight by their upper-caste neighbours from Hasanpur village. Their only crime—if victory can be called a crime—was that in 'friendly' cricket matches played between the village teams, Santagarh regularly trounced Hasanpur.

"The cricket team from Hasanpur, made up mostly of Rajputs, seems to have taken the defeats as an insult to their pride and honour. They considered themselves invincible and couldn't stomach being defeated by Dalits," says Pushkar Raj of the People's Union for Civil Liberties (PUCL). Last week, the PUCL published a report on the gruesome incident, detailing how the murders happened.

Young men from the two villages regularly played cricket on weekends. These matches were played in a nearby maidan for a small prize money of Rs 300 for the winning team. Santagarh's population is entirely scheduled caste, while Hasanpur has a mixed population. Although the Rajputs are a minority in Hasanpur, they control most of the village's social and economic affairs. The cricket team too was an upper-caste fief, but they had been playing against the Dalit team for several years without any serious confrontation off the field.

Cricket enthusiasts from nearby villages who watched these one-day matches claim that before the murders put an end to inter-village cricket, the Santagarh team had defeated the boys from Hasanpur in three consecutive matches. "The boys from Santagarh had been winning Rs 200-300 from Hasanpur for every match they won," informs Deepak Kumar of Paragpur, a nearby village. "They were a good team, they always scored many runs," he adds. The recent spate of Santagarh wins had led to bad blood between the two sides. A few matches ended in heated arguments and fisticuffs. But while the injuries healed, grudges continued to fester.

"The teams had begun fighting frequently over winning and losing in the cricket matches, but otherwise there was no enmity," says a weeping Chandro, whose 21-year-old son Munish was one of the youths killed. Munish was the Santagarh team's star batsman, and had learnt his cricketing moves from watching grainy televised matches on the family's small black-and-white TV set.

On that fateful morning, Munish was picked up by a group of men on his way to the cricket grounds where a match between Santagarh and Hasanpur had just begun. Meanwhile, his teammate, 20-year-old Vikas, who was keeping wickets for the match, was asked to come off the field as he was being summoned by the village pradhan. The other boys continued to play. "That day, the prize money was Rs 200," says Wajid, a cricket enthusiast from Paragpur.

The two youths, Vikas and Munish, were then allegedly placed under the rear of a tractor, where a hydraulic pump fitted with iron rods was used to break their windpipes. "When I went to the hospital, I couldn't recognise my own son," recalls Vikas' father, Man Singh. Though illiterate, Vikas, a casual labourer, was the family's only source of income as Man Singh suffers from chronic tuberculosis.

However, the Rajputs of Hasanpur deny that cricket played any role in the killings. In fact, they refuse to acknowledge that Hasanpur even has a cricket team. "If teenagers play cricket with each other, that doesn't make them a team," insists Jayaprakash Rana, the pradhan of Hasanpur. When one of his servants, a Dalit boy, is about to offer information, Rana quells him with a piercing stare.In Rana's version, the two Santagarh youths were caught stealing a motor pump from the fields of a Hasanpur farmer, Karan Singh, on the day they were murdered. "They had begun dismantling the pump the night before, and were caught carrying a part of it," he claims. Karan Singh's son, Dabboo, carries the story forward: "When my father shouted in anger, a mob gathered and decided to mete out justice to the thieves. How can you penalise a mob?" Another villager, who refused to be named because he works for the UP government, claims that "Santagarhis are habitual thieves". "They have a history of looting and plundering," he insists.

The victims' families lodged an fir with the police station in Gaggalahedi claiming that rivalry over cricket led to the murders. In a counter-fir filed by Karan Singh's family, the allegation is theft. The sho, Aadil Rashid, too maintains it was an "angry mob" that attacked the duo after they were caught "red-handed". Strangely enough, Vikas was brought to the hospital in Saharanpur where he breathed his last with his cricketing gear still on. A moot question: why would anyone be carrying out a theft dressed in cricket pads? "They can slap any allegation on our son, now that he is dead. He can hardly defend himself now," says Man Singh.

Ram Kumar, a Saharanpur-based social worker who first informed the PUCL about the incident, says the two victims were outspoken youths, who on occasion had informally campaigned for Dalit rights in the villages. "The killings were meant to send a message about who's king of these villages," he says. Although the area, which falls under the Harora assembly constituency, was traditionally a bsp stronghold—with Mayawati herself having contested and won from here twice—the bsp lost to the Samajwadi Party in the December 2003 byelection. "The immediate provocation may have been cricket, but one can only make sense of the killings against the broader political context," says Kumar. He maintains that the killings were brutal acts of intimidation, designed by those with political protection to "put the Dalits in their place".

For the time being, the message seems to have hit home. In Santagarh, the barbaric acts have cast a deathly pall on the village team's enthusiasm for cricket. The members of the erstwhile Santagarh team are unwilling to talk, or even come forth. "Everyone is scared that they will meet a similar fate if they talk about what happened," says Meghraj, who was present at the scene of the crime. "All competitive matches have been stopped since Vikas and Munish were killed," says Wajid.

The case has now been transferred to the Lucknow branch of the CB-CID, given its politically sensitive overtones. But while justice takes its unhurried course, the skin of fear surrounding Santagarh only grows thicker. "Forget playing cricket, no one from our village even ventures in the direction of Hasanpur anymore," says Munish's father Vikram Singh. A second innings of this deadly caste game could crush their spirit forever.