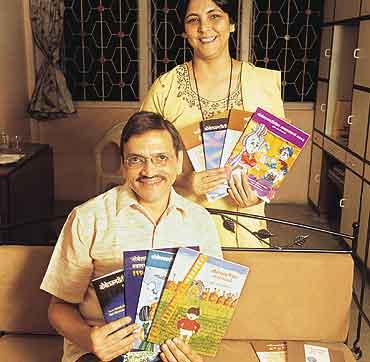 outlookindia.com
-0001-11-30T00:00:00+0553
Pairing cutting-edge scientific research with Laurel and Hardy? Or Sherlock Holmes? Surely not. But like a good scientist, Sudhir Thattey brings together the unlikeliest ingredients to create a concoction of full-throttle mystery, surprise and scientific discovery.

A scientist in the Laser and Plasmatechnology division of Bombay’s Bhabha Atomic Research Institute, Thattey presses new-age Detective Holmes into service to uncover a national terrorist network. Holmes gets the police to cordon off the network but the terrorists can cross through. It turns out this is an internal agent who had crossed over. This may sound like a good potboiler but it exactly mirrors the discovery of prion or the disease-causing protein by Stanley Prusiner, which won him the 1997 Nobel Prize for Medicine. While conventional wisdom suggested that bacteria, virus and fungi caused disease and proteins were good for the body, Prusiner, tipped by the unexplained death of a patient, found that a protein with the wrong structure can cause disease. He said that proteins could be very similar but have positive or negative neurons. While positive neurons were good for the body, negative neurons could disrupt messages from reaching the brain or cause disease.

Thattey and his economics graduate wife Nandini create such racy stories in Marathi, complete with colour illustrations, that provide the perfect analogies from everyday life for esoteric scientific research, bringing it closer to people whose lives are altered by such research but who still feel they cannot relate to it. In a funny but apt illustration, comic character Hardy can get through a small door but Laurel cannot. This is used to show the 2003 Nobel Prize-winning discovery in chemistry by Roderick McKinnon of ion channels on the surface of nerve cells. Ion channels open and close based on different cellular signals rather than size.

In fact, Nobel Nagriche Nawal Sapne (Wonder Dreams From Nobel City), the series of books that will come out for the 10th year this year, has won three state literary awards from the Maharashtra state government and has been appreciated by the winners themselves. John Walker, the 1997 prize-winner in chemistry, wrote back saying "part of my job is to explain our complex science to the general public and to make it understandable to them. I am grateful to you for making it so".

The Thatteys, who can best be described as science junkies, are also driven by what they call "the diamond jubilee of no Indian Nobel prize". While the Indian economy is powered by its engineers and doctors, their rise has coincided with the declining interest in pure sciences. Youngsters are put off either by unimaginative science curricula at school; those interested are redirected towards engineering or medicine. 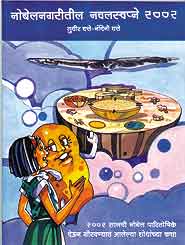 The Thatteys’ books, written in Marathi, reach out to children and adults, often in rural areas. So, Dr Thattey often fields calls from young readers who, inspired by the books, want to study pure sciences. One engineering student from Marathwada called in saying asking if there was any way he could still be in the sciences. Thattey patiently mentors them all and regularly does science camps all over the state. To connect with these readers, the authors regularly use very Indian analogies like using the water wheel in a well to describe the transfer of energy in the body or the split-second precision of acrobats to explain a complex area like femtochemistry (an area of physical chemistry that measures chemical reactions on the timescale of femtoseconds—one femtosecond is 0.000000000000001 seconds).

The Thatteys have been writing about science for many years; their works have included a series on the history of inventions and a prize-winning book on the future of science and its place in society. In 1996, they started their annual series on Nobel Prize-winning works.It became a runaway success and has gone into reprints almost every year, ever since.

Each year the Nobel prizes are announced in the first week of October and Thattey immediately starts reading up scientific journals to hone his understanding of the prize-winning discovery. Then he explains it to wife Nandini who comes up with stories that best explain the discovery in simple terms that young people and adults not associated with the sciences can understand. And the books come out each year on Christmas day. It is a mad dash against time complete with heated creative differences and eureka moments when they hit the right analogy.

The books now have small sketches and biographies of the winners. Neat illustrations and diagrams explain both the story and the discovery. There is a small summary of the research without the story and a glossary at the end of the book, all of which make the complex discovery easier to understand.

Scientific research has always been one of those things that are supposed to be seen but not heard, that is until they are eventually used commercially. But the Thatteys take their role of explaining science to engender love of the sciences very seriously. Incredible as it sounds, they actually explain terms like femtochemistry or asymptotic freedom in ways that allow normal people to experience the joy of discovery.

In fact, Thattey is brimming with his love of the sciences and reducing intricate scientific discoveries into simple analogies seems to come easily to him. For instance, the seemingly contradictory phenomenon of asymptotic freedom, last year’s physics Nobel Prize-winning discovery by Dr David Gross, David Politzer and Frank Wilckzek, posited that the charge between two quarks, which are building blocks for matter, gets weaker as they get closer and stronger as they go apart, to the extent that when they are close they behave almost like free particles. Thattey’s story includes a fresh explanation of gravity and goes on to describe two balls with a rubber band around both of them. When they are pulled apart the charge of the rubber band ensures tension between them but as they come closer, that charge vanishes and the balls are almost free.

"I really believe that nobody is too dumb to understand or love science. The simplest questions lead to the most complex discoveries. So, keeping our curiosity alive is the key," says Nandini.

Encouraged by the couple’s success, publishers Granthali plan to bring out English translations of their works this year so that they can reach a wider audience, including in Maharashtra where the sciences are taught in English at increasingly younger ages. While experiencing the joy of high-end scientific discovery in Marathi is a unique thrill, the authors do want to reach out to more children across the country and excite them with science.