On A Collusion Course

Powerfully persuasive, well-researched take on the dynamics of communal violence 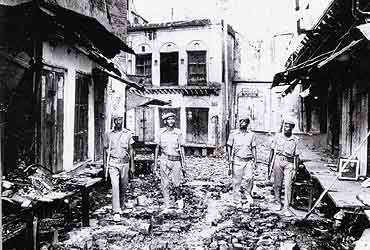 The Production Of Hindu-Muslim Violence In Contemporary India
By Paul R. Brass
Oxford University Press Rs 495; Pages: 476
A foremost scholar on the post-Independence politics of Uttar Pradesh and professor emeritus at the University of Washington, Paul Brass has used his 42 years of research on and in India, to document how Hindu-Muslim violence is produced and persists. He has picked on Aligarh as the site for his investigations where he has examined in meticulous detail the political, demographic, social and economic factors which have produced a series of riots from 1946 to 1995. He has looked into every mohalla and gali of Aligarh and personally interviewed countless instigators, participants and victims of violence. On the basis of his Aligarh explorations, he has expanded his thesis to analyse the dynamics of riot production in India. Citing ample evidence, he dismisses the commonplace notion that riots are spontaneous outbursts of murderous violence between frenzied mobs.

Referring to specific incidents in the Sarai Sultani mohalla of Aligarh, Brass asks: "How do such ghastly atrocities akin to Nazi violence occur in democratic India?" His answers are also specific: "First, the police are predominantly Hindu, many of them imbued with the same anti-Muslim feelings as the general population. Second, there is a special police force, the pac, that is notoriously anti-Muslim. Third, repeated accounts in Sarai Sultani and elsewhere make it clear that the police and the pac work hand in hand with members of the militant Hindu organisations in beating and killing Muslims." Placing these incidents in a wider, global framework, he explains that such acts "take place within a context, a discourse, that isolates and demonises a particular group of people—in this case Muslims, their religion, and their social practices—and characterises them as a physical danger to Hindus and to the unity of the country".

Brass also examines the aftermath of riots, when facts are wilfully distorted by politicians, journalists, administrators, police officers, social scientists, historians and interested citizens in a game of 'blame displacement' which disperses responsibility so wildly that ultimately nobody is culpable. The scene is set for the next round of even more ghastly violence.

There is an entire chapter which examines the role of the media and implicates it in the production of communal violence. Even a major metropolitan newspaper like The Times of India under the editorship of the late Girilal Jain is implicated for its frequent publication during and immediately after riots of insinuating comments suggesting Muslim responsibility for riots, reports on the presence of Pakistanis at the riot site and on the rapid increase in the Muslim population, articles and editorials deploring the violence and its consequences for Muslims while expressing understanding at the same time of Hindu resentments.

Brass baldly states at the beginning of his work that Hindu-Muslim riots and anti-Muslim pogroms have become endemic in India. It is a principal argument of his book that the whole political order in post-Independence north India and many, if not most, of its leading as well as local actors—more markedly so since the death of Nehru—have become implicated in the persistence of riots. Can political groups stop major riots from breaking out? He notes that, unlike most other important political parties, the CPI(M) in West Bengal has avoided appealing on communal grounds to either Hindus or Muslims and has used the full powers of the state to ensure that communal riots simply do not happen.

What of the future? Brass does not sound hopeful. "The history of Aligarh, of UP, and of much of the rest of the country as well does not inspire confidence that there will be no occasion in future for the resuscitation of movements of mass mobilisation, designed to mobilise Hindus, intimidate Muslims, and move India further in the direction of a militant Hindu national state."

Brass does not theorise airily as do some recent works on communal violence like Ashutosh Varshney's Ethnic Conflict and Civic Life: Hindus and Muslims in India. Brass's arguments flow from his punctilious field research. Yet, the perfectionism of his testimony may have become a self-inflicted handicap. In the mass of detail, he has lost sight of prioritising his important findings. The lay reader can get lost in the wealth of detail.

He has covered every major factor in the production of violence, except one. The missing factor is the corrupt, tardy and communalised criminal justice system. Though his book has a postscript on last year's gruesome events in Gujarat, Brass has perhaps not quite realised the qualitative change in the pattern of communal conflict. Gujarat has become the ground for Hindu state terrorism countered by individual acts of Muslim terrorism.