On A Collapsible Building

A book on the chronic failures of our economy is painted in the broadest strokes, yet a compelling read 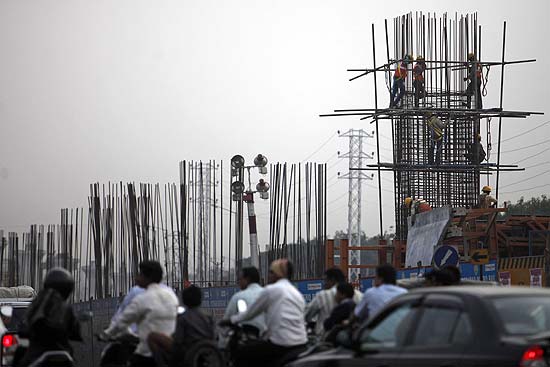 Mihir S. Sharma’s Restart is the longest obituary you will ever read on India—362 pages for telling us why we are a failed country and why there is no hope in hell. Not because we have a socialist mindset that engulfs all we do, but also because of the pernicious influence of Raj Kapoor and the film Guru, which highlights how susceptible we are at celebrating success. And the cynicism doesn’t ever stop in this well-written tome. Though Sha­rma ends his thank yous to the reader “for being able to finish reading a book on the Indian econ­omy”, we must also be praised for our courage to go through a history lesson tainted with blinkered airplane rides over American and German factory sheds, not to mention the ubiquitous tea shop in Padra­una, where Sharma learns more about the country that he has returned to ‘ignobly’ from academia.

There is always a danger when opinion page editors begin to write books and that too on a subject broadly brush-stroked as the Indian economy. No wonder, Sharma draws both quotes and sustenance from his two bosses, T.N. Ninan and Shekhar Gupta, who have both in their reasoned journalistic careers also worn capitalist hats in the manner in which they held both editorial and management jobs. But then, with such trivia, let fools contest. That what is said best is best. What is admirable about this book is how Sharma deftly weaves a story that highlights not just how we failed but also attempts a sociological analysis, which stresses the reasons why we failed.

The basic argument begins with the reasons for enduring failure that we have been witness to and, in typical journalistic abandon, Sharma begins the blame with Mahatma Gandhi and his penchant for third-class train tra­vel. The fact that Gandhi also gave India freedom is not relevant to Sharma’s thesis. But then, Sharma works for a business newspaper and must be forgi­ven these historical lapses. The basic premise, earlier in the book, and revisi­ted several times later, is that India has failed because it gave up on manufacturing. And to buttress the argument, Sha­rma compares India to Bangladesh insofar as the textile exp­orts business is concerned, arguing that Bangladesh has a $21 billion industry, while India only a $12 billion one. But then to make this comparison and highlight our problems is a bit odious. The fact that Bangladesh also violates most child labour and factory safety norms is ignored. This is a book destined to take its place as an obituary, so to expect it to be fair would be asking for a bit much.

In this journey, Sharma takes us through all our misfortunes, many of which are embedded in Indian politics: perhaps forgetting to mention the nexus that exists between business, politics and media. The paper that Sharma writes for is owned by Uday Kotak in large part, but then again this is trivia. Where the book works for me is making a compelling case not just for restarting India but in fact rebooting it. Sharma wonderfully captures the hypocrisy of our so-called economic journey with a misquote by Manmohan Singh, where he incorrectly quoted Victor Hugo while extolling the world to look at an awakened India. Unlike the other fine character in Sharma’s book, Jim O’Neill, who in turn asks, ‘What is the matter with you guys’?

The tiny descriptor on the book jacket perhaps best captures the book. This is not a book about obvious solutions and one must credit Sharma with opening a non-existent can of worms at least as far as India’s economic history is concerned. He also manages to draw on the various policy flip-flops, ranging from our arch­aic labour laws to the gloom in the power sector and crony capitalism.

Restart is not a book that will make for compelling reading. It will, howe­ver, make for compelling debate and that is where the book scores: there are enough trenches which are left unm­anned, as Sharma begins to take us on his personal journey through the minefield that India ostensibly is. You get to see the lacunae in our manufacturing prowess as you do the failings of being an all services dependent economy. Perhaps where the book does brillian­tly is in making a case for more Indians to have more to do. Jobs are the underlying panacea of our country.

So read the book if you must. But remember that the story of India is flawed but not entirely over. And at times, optimism must be the recurring theme in any book which exhorts one to ‘Restart’. At Rs 599, it’s a pretty inexpensive obituary too.