On A Bit Of A High

The hill kingdom was only cause for cheer for Congress 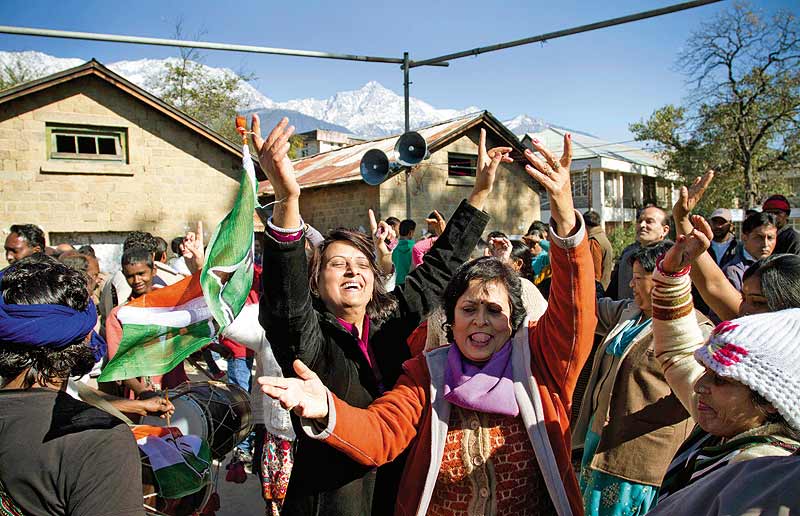 Just two hours after counting began at 8 am, the BJP was already trailing the Congress in Himachal Pradesh. By 11 am, incumbent chief minister Prem Kumar Dhumal had conceded defeat, welcoming the “people’s decision”. BJP’s Mission Repeat had turned into a decisive defeat.

As the Congress, led by former chief minister Raja Virbhadra Singh, who faces graft charges, prepared to take charge, senior BJP leader Shanta Kumar said in Delhi, “We accept the verdict. The party fought the elections together. The people did not vote for us.”

While Kumar may have accepted the verdict, sources confirm the Dhumal camp was holding him singularly responsible for its beating at the hustings. A close Dhumal aide says, “Shanta Kumarji played a spoiler. It cost us at least 11 seats alone in Kangra, the margin we lost with.” The BJP slid from 41 to a dismal 26, an evident anti-BJP vote in the hill state. The Congress meanwhile forged ahead with 36, comfortably reaching the half-way mark.

Verdict 2012 marks a return for the Congress after five years, in keeping with the extended voter oscillation between the the main parties every term that Himachal has come to be identified with for over three decades. Dhumal becomes yet another example of a CM fighting anti-incumbency and unable to keep his place in the office.

While the BJP fought these polls on the development plank and tried cornering the Congress by trying to raise the issue of the cap on subsidised LPG cylinders by the central government, finally neither the corruption charges against Virbhadra nor the induction stoves could warm up the tally for the saffron party.

The Congress stood to gain from the divide between Upper and Lower Himachal, with Virbhadra’s party defeating the BJP handsomely in the upper Himachal region. Dhumal’s son and BJP MP from Hamirpur, Anurag Thakur, conceded that “ticket distribution and rebels have been a major cause for our defeat”.

The Congress meanwhile used Himachal as its sole reason to rejoice, given the results in Gujarat. There was a sour note for the CPI(M), which after putting up a good show at the Shimla Municipal Corporation elections, and aligning itself with the newly-formed Himachal Lokhit Party, won just one seat.

By Prarthna Gahilote in Himachal Pradesh

Is The Heir Really Apparent?