On being awarded the Order of the British Empire (obe) for his contribution to British cinema. 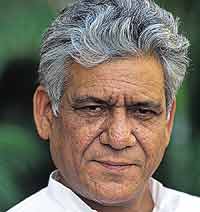 Are you attending the award ceremony?
I don't think they've fixed a date for the ceremony yet. But I'm not sure if I will be going.

If you are not there?
Then it will be given by the British High Commissioner to India either here in Bombay or Delhi.

Would you say it is the highest honour you've ever received?
At an international level, perhaps I can say that... but I've received the Padmashri here.

Are British films more satisfying?
Absolutely. Here in India, but for a few films, what you chiefly get is crap work. So in the last ten years working for high quality British films has been professionally satisfying.

Does the Obe benefit you professionally?
There will be a greater awareness about my work. People who wonder who this chap from India is who won the Obe might want to check me out.

Did the British film industry nominate you?
Yes. I was chosen by the members of my own field. That makes you feel good.

There are a few British MPs who believe that the Obe is outdated...