The coach has nurtured champions. His centre still houses aspiring ambitions at a nominal cost. 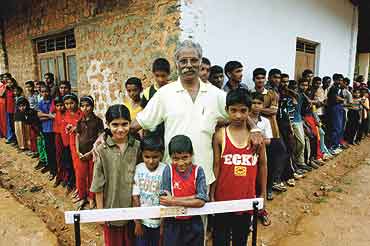 Anju Bobby George is busy striving to breach her 7-meter barrier in the race for the world long jump title. Yet, occasionally, memory leaps backward as she recalls with gratitude her first coach, K.P. Thomas. This retired havildar has probably done more for Indian athletics than we know. Outlook caught up with him at Koruthode village near Mundakkayam in the Kottayam district of Kerala. It’s raining and the school ground is slushy on a Saturday evening. Braving the rain are 50-odd athletes, with Thomas Master, their coach.

The Master, aged 61, has been mentor to many of Kerala’s star athletes. Not just Anju Bobby George, he also spotted the likes of Shiny Wilson and Jincy Philip—all Olympians. Despite having nurtured such talent, Thomas is a picture of humility and goes about his job with remarkable perseverance. The veteran coach simply refuses to hang up his boots. Even now, he has more than 100 athletes, some of them just past kindergarten, under his expert care—all eyes set on international competitions.

After his retirement from the army, Thomas joined the C. Kesavan Memorial High School at Koruthode as physical instructor. In just a few years he turned the school athletic team around. It bagged the state championship and retained the title for 14 years in a row. In the process, Koruthode earned the sobriquet of a sports village for its harvest of medals at state and national events. Says Thomas: "I’ve been sort of indulging in this passion ever since I came out of the army and joined the school. Yes,
I’ve retired from the school and people ask me, ‘isn’t it time to rest?’".

But the next moment he reels off names of his budding medal hopefuls, some of whom he believes will make it to the Olympic level. He says the most crucial task for a coach is to spot the event best suited for each athlete. For instance, when Anju joined the Koruthode school in the ninth standard, she was focused on sprinting. Thomas Master put her on long jump and hurdles. By the time she cleared the board exam, Anju was an accomplished long jumper. "It’s the discipline, dedication and eye for detail that has made Thomas Master a mentor for Kerala’s brightest athletes," says Anju. She recalls the long stretches her father had to take her on his cycle for training before she finally enrolled at Thomas Master’s centre.

The coach runs a boarding-cum-training centre at Koruthode. He can accommodate 50 athletes. Those who can afford pay
Rs 25 a day, others thrive on the coach’s generosity. It’s a gurukul system wherein the sishyas assist the guru in all activities. His wards wake up at 4 am, study until daybreak and go to the ground for training sessions.

The coach reposes much confidence in his pupils who hail mostly from the hilly areas. The rugged life on the hills where they fight the elements of nature offers the right milieu for competitive sporting. "My army life has instilled in me a sense of discipline and perseverance. Rain or shine, we practise, morning and evening. But right now we have to send the seniors for practice to a distant ground. Facilities are still lacking," says Thomas.

There are at least a dozen athletes who according to Thomas are shaping up well for honours at international levels. Tiana Mary Thomas, a higher secondary student, is a sure bet at hurdles while M.B. Blessy is focused on 3,000 mt walking, Meenu Mani Jose is practising long jump and triple jump and Leena Thomas is a promising hurdler. The coach is very happy with the way the Kerala government has been promoting athletics. "In the late 1970s, it was a different story. There were more laurels and no money. Now, there are athletes here who earn up to Rs 40,000 a year as scholarship. What needs to be done is to put in place a mechanism to catch the talented at an early age.There is no dearth of talent itself," says Thomas. He should know. Contact the coach at: Kurinsinkal House, Koruthode PO, Mundakkayam, Kottayam—686513, Kerala.