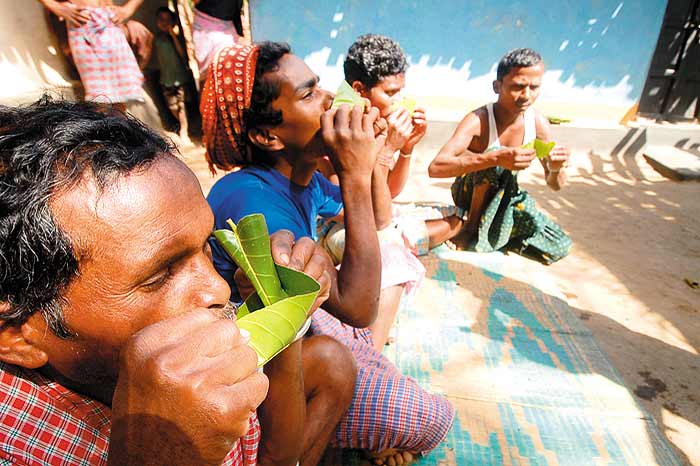 For unadulterated local lore and traditional gastronomic secrets in Chhattisgarh, Surya Pratap Deo, or Jolly as he’s more commonly known, is your man. A former chef, he’ll tell you the legend behind tribal dances done on stilts, how to make the tribal delicacy—the chapda (yellow ant) chutney that keeps malaria away—and cook you fara, traditional rice dumplings. Managing his family’s heritage palace in Kanker along with his brother Jai, about 120 km from Raipur, Jolly has, in the last couple of years, met all kinds of travellers. To those who insist on seeing Chhattisgarh the local way, he has but one tip: go be part of a local fair.

That’s probably fair advice to give anyone on a trip here. While Chhattisgarh boasts glorious waterfalls, unspoilt wildlife sanctuaries, ancient caves, temples and palaces, what’s really worth noting is the constant sense of celebration in the community. The native social calendar is full of fairs and festivals through the year, all of them a visual treat. Of course, the Bastar Dussehra celebration tops the list, when the community celebrates not the triumph of Rama, but of Devi Maoli, the native deity. It’s possibly the longest Dussehra in the country—at 75 days! But no matter which month you visit—you’re bound to run into some kind of celebration or the other. One way to experience local culture is to head straight south to Bastar or Jagdalpur once you land in Raipur. Alternatively, as we did, use Kanker as a base, which is much closer to Raipur, and visit parts of Bastar over the next couple of days. 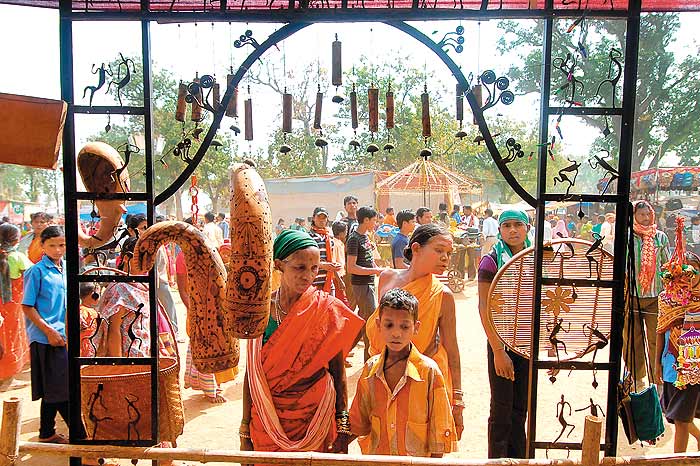 Centre of the universe The Narayanpur Mata Mela draws thousands of villagers. (Photograph by Sanjay Rawat)

So just after breakfast on a clear, sunny day, we leave the rambling grounds of Kanker Palace for hilly Keshkal. On the border of Kanker and Bastar, Keshkal’s mystic forests run thick and the roads turn sharp, till you’re back on plain land. We’re on our way to the annual fair at Narayanpur, about three hours away from Kanker. On the way, we take a detour to Kumharpara near Bahigaon, an enclave of potters and metal artisans. Wrought iron and bell metal craft is all over urban markets these days, yes, but this is where a lot of it is actually crafted. Kumharpara is a peaceful, sleepy little village where time has sort of stood still: kids chase each other on bicycles, potters dry their ware atop roofs, and holidays, well, are holidays. Tourists are not entertained on Sundays. Here, travellers can even stay for a few days and watch artisans at work, take a workshop and learn the basics of metalwork.

The Narayanpur fair announces itself miles before we reach the grounds, with families decked up for festivities all purposefully marching towards it in long, snaking lines. With the local tribes having descended here in thousands (even small groups from faraway hills) to trade, barter their goods and make merry, the Narayanpur Mata Mela is the hub of activity this weekend. Countless sweet shops catch the eye, with tiny gulab jamuns packed into plastic bags strung together on wires, mountains of glistening orange imarti and balushahi, and little gupchup (pani puri with a shot of aloo matar stuffing) kiosks. There are hundreds of stalls trading in traditional tribal headgear sewn with cowrie shells, beaded baskets, wrought iron ware, silver jewellery, and Narayanpur’s famous bamboo craft. Along with continuing customs like cockfights and dances that are integral to the fair, you also note fading traditions: younger women increasingly avoid dressing traditionally; the sari hiked up to the knee and dressing sans the blouse is mostly followed by older women now, unless it’s a big festival like Dussehra. But at the centre of all the fairs is the worship of deities: late afternoon, the nagada players line up outside the temple at Narayanpur, beating up a musical frenzy.

To heighten the sense of festivity is the ample availability of the traditional alcoholic nectar, mahua. It’s picking season, and in one of the villages we visit later in Kondagaon, the women are out in the forest filling up their baskets with mahua, the tiny light-green tangy flower fruit, which they will brew and distil for hours. It’s usually had in little leaf cups, downed in a shot. The day we visit, the men are home on the occasion of Makar Sankranti, catching rats atop trees. Seventeen-year-old Narsoo, the village’s stealthiest rat catcher, has caught a record six rats today, tucked securely into a shoulder bag. He’s going to cook them with a bit of chilli powder and salt for today’s special lunch, he says proudly. No matter if you are a cool cat from the concrete jungle—all are welcome to join the party.