Oh, What A Racket!

The hills are alive with the buzz of self-seeking NGOs, many existing only in name 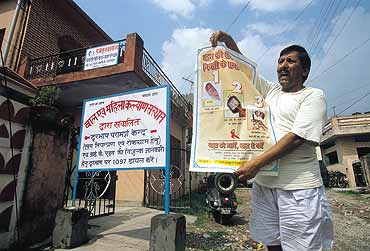 When Uttaranchal's IT commissioner Ashwini Luthra initiated a survey of NGOs in May, he did not expect to chance upon a fraud that runs into crores of rupees. "When the IT department started collecting data, we found that many NGOs did not actually exist or were non-functional," says Luthra. "Yet, money is being pumped into trusts, educational societies, NGOs and ashrams all over Uttaranchal." While the IT office lists a total 44,824 groups, the office of the registrar puts the figure at 41,826.

No wonder then that Uttaranchal's NGO community is rife with allegations of corruption and diversion of funds. Amidst the profusion, one can find registered NGOs such as the Mahila Vikas Sansthan and Priyadarshini Himalayan Seva Institute that don't exist at their addresses, educational societies that have run up huge accounting discrepancies, and blacklisted NGOs that are ostensibly unaware of their disrepute.