We have to be on our toes against the Kenyans. They really gave us a scare the last time we played them in the Super Six. 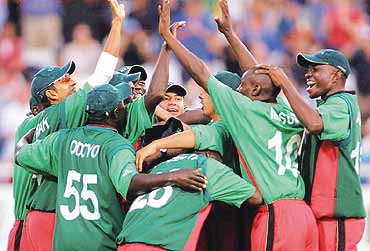 outlookindia.com
-0001-11-30T00:00:00+0553
The semi-final against Kenya will not be an easy match. For that matter, I never believed any match at the World Cup level can be considered easy. Kenya is a much improved outfit now. After the Test-playing nations, they are the strongest side. They have played very well in this tournament to become the first non-Test-playing nation in World Cup history to qualify for the semis. We have to be on our toes against them because they are a highly motivated side. They have beaten good teams before and in this World Cup they have beaten Sri Lanka and Zimbabwe.

The last time we played them in the Super Six stage at Cape Town, they gave us a scare. We were in serious trouble chasing the target. That's why I rate my knock against them higher than the one against Sri Lanka or the century against Namibia. In the Sri Lanka match, we were cruising along fine when I had to just come and accelerate. But against Kenya, it was a pressure situation. Their opening bowling attack is almost as good as anybody else's. Ravindu Shah is a very talented bat. On the whole, they are an effective fighting unit.

We would have liked the semi-final in Durban to be a day match instead of a day-night affair. But it's not a big issue. The reason why we appealed to the ICC to shift the match timing was because the conditions change so much for a team batting second in a day-night match in Durban. The possibility of rain, as evident in the South Africa-Sri Lanka match, was another factor. But the ICC's reply explaining why they could not carry out our request was not only expected but also fully understandable. If they had changed it to a day match, they would have had to answer a lot of questions from other teams in this World Cup which were affected by the rules. I think more than their inability to get satellite time, the reason for turning down our request was to stick to the rules. But this is not a cause of worry. We are playing very good cricket as a team and I hope we will continue with our good form.

I don't see any need to change the composition of the team for the knock-out phase. The semi-final will be a pressure situation, no doubts about it. But the way we have approached this World Cup is to treat every game as a knock-out stage. Winning every game in the first round was so crucial because we would get carry-on points. In the second round, we had to win every game to keep the momentum going and be in the position we wanted in the final listing of the Super Six. But yes, there is a sense of importance about playing the semis. It's a great achievement for this team that has so many young players.

In the last two years, we have had some outstanding wins. I don't think it's fair to say that we have been inconsistent performers. Yes, we have not been as consistent as the Australians, but in my opinion, this Indian team has been one of the most professional, talented and hard-working unit ever to play for the country. The way the young guys are playing, I am sure they will go on for another five years at least in international cricket.

As captain, there is a sense of achievement within me. I believed in this team and in some of the boys who needed to be backed. The way I look at my job is never to forget that at the end of the day this is a sport. It's just a game. That's why I have learnt to take a win or a loss in my stride. I am happy with the way I myself have batted in the tournament after the long bad patch. After the match against Australia, I felt my form had truly returned. Even when I didn't score runs, I knew I was middling the ball well. Every time I have got out, it was because I tried to accelerate and paid the price. Someone has to do that in the course of the innings when the scoring rate dips.

But for the first two matches in the tournament, our batting has never really suffered.I hope we take this form into the knock-out stage. Our strength is to put up a good total and defend it. That's when we are the most dangerous. But having said that, the decision to bat first or bowl will depend on the conditions. We have a terrific bowling attack which is capable of picking up quick wickets if there is moisture on the pitch. I would say this is the best fast bowling attack India has ever seen. Earlier, we never really had three high-quality fast bowlers who could be very quick too. This team can achieve anything it wants.

This Silence Is A Scream