In spite of its inconsistencies, will become part of a small group of films that are challenging the predictability of commercial Kannada cinema. 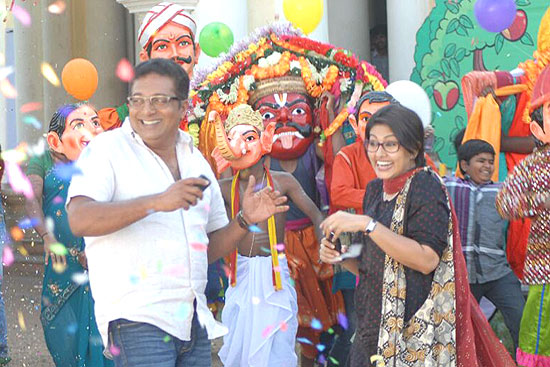 Never before, at least in recent times, has a name made such a difference to a film. The movie Salt N’ Pepper in Malayalam was remade into Kannada, Tamil and Telugu. All four have a different title: in Kannada it means ‘Seasoning’, in Tamil it means ‘In Your Kitchen’ and in Telugu it is a curious mix of the names of two dishes. Based merely on the title, I can safely say that the Kannada version is better than the Tamil or Telugu ones!

Oggarane is a gentle, middle-aged romantic story: it has a slightly unseemly paunch around the middle and sometimes has difficulty in moving swiftly through its paces. Kalidasa (Prakash Rai, who is also the director) is an archaeologist who has more love for taste than a taste for love. Even his archaeological work is only a filler between his eating experiences.

But he is not the stereotype bachelor who will enjoy anything cooked or uncooked. He is also the kind of groom most disliked by the parents of a girl: he prefers the cook over the coy girl. Obviously, Kalidasa is a typical been-a-bachelor-for-too-long who loves food more than women.

On the other hand, there is Gowri (Sneha Prasanna), a single working woman with strong convictions. She too seems very comfortable in her unmarried status, although she is surrounded by people (one of whom is played delightfully by good ol’ Urvashi) who keep reminding her of the singular pitfalls of being a single woman.

And the remaining part of the movie is only about this question: how do two people who are against love deal with it when IT happens? The movie deals with it beautifully. While the scenes revolving around food are wonderfully shot and brought tears to my mouth, the movie is really about that unexplained addition that turns ordinary food into an extraordinary gift from the gods. That unexplained dash of something, of a correc­tly seasoned hing or a sprinkling of mustard, which can lift the pros­aic into the sacred.

The seasoning which changes this movie from ordinary to enjoyable is the vulnerability of Kali and Gowri. They fall in love with each other’s voice. When the time comes to put a body to the voice, they run away and find young representatives to be themselves. Predictably, the young do not have the wherewithal to be adults, to understand the nature of longing and need that characterise Kali’s and Sneha’s romance. What these kids lack in their romance is that little bit of seasoning!

Sneha is striking and Prakash Rai pulls off a romantic role effortles­sly. Samyuktha is a delight, as is Preetha’s cinematography. This movie, in spite of its inconsistencies, will become part of a small group of films that are challenging the predictability of commercial Kannada cinema.