Off With The Old Guard

Missing for a month, has Rahul returned a more determined man? 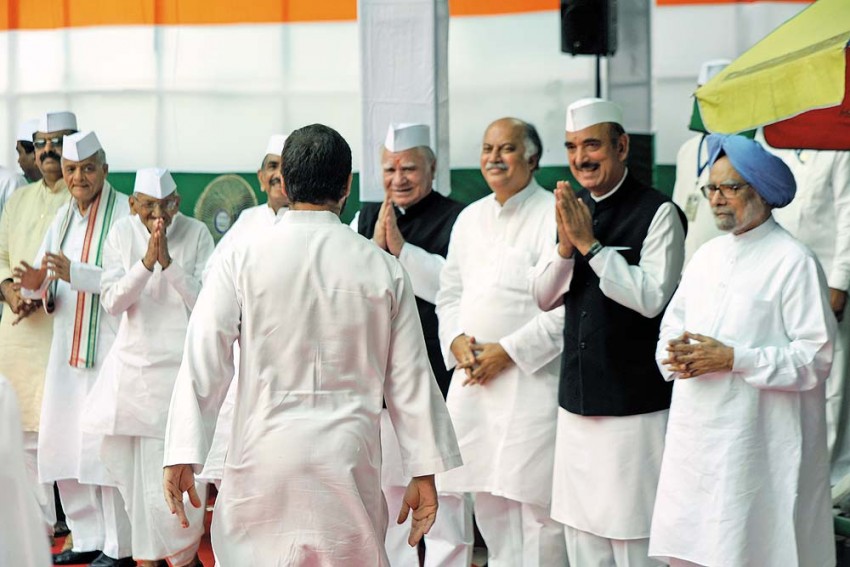 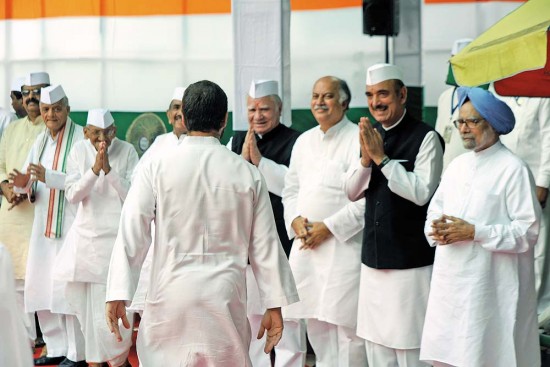 So where has Rahul Gandhi been all these days? Introspecting abroad, chanting Buddhist shlokas  in a monastery, or being treated to help cope up with the burden of expectation and failure. Some  even say he has had a fight with his mother. What it exactly is, we will never know. It could be all, or none of the above. Maybe he is returning this week from a plain holiday, even if it was on the eve of the budget session. He returns this week, certainly from a trip outside the country. Perhaps a changed man.

Change is something he has espoused and wanted for a long time. For the old order to make way for the new, for more inner party democracy, for a party more savvy with information technology. He is hell bent on that change, and his disappearance from the political landscape has been construed by many as an attempt to pressurise his mother into concurring with the changes he is suggesting.

Those at the receiving end are calling it blackmail. He wants inner party democracy, they say, but then appoints sons of former politicians as PCC chiefs—the Pilots and the Scindias—thus only perpetuating the ‘netaputravaad’. “He himself is there because there is no inner party democracy,” says a former minister and general secretary of the party. “As long as he is around, there cannot be inner party democracy. On his own, he wouldn’t be allowed to man even a polling booth.” Not so long ago, P. Chidam­baram, concerned with the low  morale in the party, had advised him: “Speak more.” “And don’t sulk,”  another former minister would add. And he is not joking.

Rahul finds himself in the middle of a divide that is more generational than ideological. He is both the cause of it and the affected party. He is convinced that if the Congress is to lead the nation again, as in the past, it has to break from the past. But the old guard is reluctant to let Gen Next take charge. Rahul’s team lays the blame squarely on the old guard for the decimation of the party. They in turn say that Rahul is the liability and incapable of leading the party. Returning recently from the wedding of former Punjab CM Amarinder Singh’s son Angad with Himachal Pradesh CM Vir­bhadra Singh’s daughter Aparajita, they laugh at the suggestion that they collectively are responsible for the Congress’s dismal show, and that they are the problem, and therefore cannot be part of the solution, as per the Rahul camp. 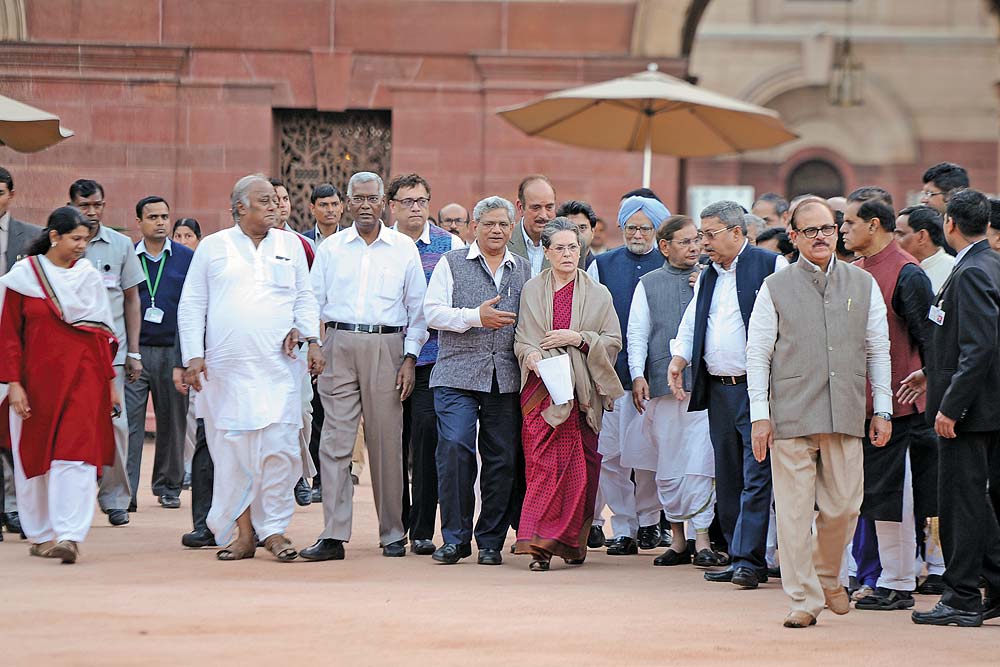 Leading lady Sonia leads a march against the amendments to the Land Acquisition Act. (Photograph by Jitender Gupta)

The old guard or the status quoists—Ahmed Patel, Janardhan Dwivedi, Motilal Vora, Ambika Soni and A.K. Antony, to name a few—have helped Sonia run the party for the last 20 years, being  her eyes, ears and nose in the party and the government. “They have done well for the party, no one is denying that. I have worked with them and they are very competent people. But it’s time to give way to the new. This is the law of nature,” says another former MoS in the UPA government.

“Rahul is ready,” says a core member of his team, who helped organise his meetings with other like-minded leaders, “Sarfaroshi ki tamanna ab hamare dil mein hai, dekhna hai zor kitna baaju-e-qaatil mein hai,” he recites before going on to add, “Power has to be grabbed, inside or outside the party. It is never served on a platter.”

How can you hold him responsible for defeats when he hasn’t decided the campaign or the strategy, asks a Rahul follower.

Though they may differ on the nature of the beast, change is something everyone in the Congress is agreed on. The party has suffered a series of defeats in the assembly elections, before the final blow in the 2014 parliamentary elections, its 44 seats the lowest ever, denying it even the post of Leader of the Opposi­tion. The wipeout in Delhi—the loss of all seats and the security deposit in 62 of the 70 assembly constituencies—was the final nail in the coffin. The former MoS in the UPA government calls it a “multiple organ failure”. He stresses the need for new organ implants, a new energy and a new leadership. “People say Rahul trusts me, I repose my trust in the Congress under his leadership.”

What, though, of the very many who think Rahul himself is the problem? “Let’s deal with facts,” says one of them, a renowned lawyer who held a coveted ministry in the Manmohan Singh cabinet. “Rahul led the party to a most humiliating defeat in UP, Bihar and finally in the Lok Sabha.”

All that is set to change now. Rahul, it seems, has put his foot down, is determined to have his way. “He is not a fool,” asserts the close aide and former MoS in UPA, he has been observing the party for the last 10 years. Unlike his father Rajiv, who took the reins of the party and the country under more tragic circumstances—the assassination of his mother Indira in 1984—Rahul has had the luxury of time. He has been able to create a team of his own, he knows what needs to be done and will do it.” He believes there will be a greater role for Sachin Pilot, Scindia, Milind Deora and R.P.N. Singh, to name a few.

Resist it you might, but change is inevitable. And the Congress is no stranger to change. Nearly, a hundred years ago, the split in the Indian National Congress between the garam dal (extremists) and the naram dal (moderates) resulted in a shift in demand for full independence from that for greater freedom within the British Raj espoused by the moderates. Much later, Rajiv didn’t trust brother Sanjay’s trusted aides, or of Indira’s, like R.K. Dhawan. Arun Singh and Arun Nehru became his confidants. 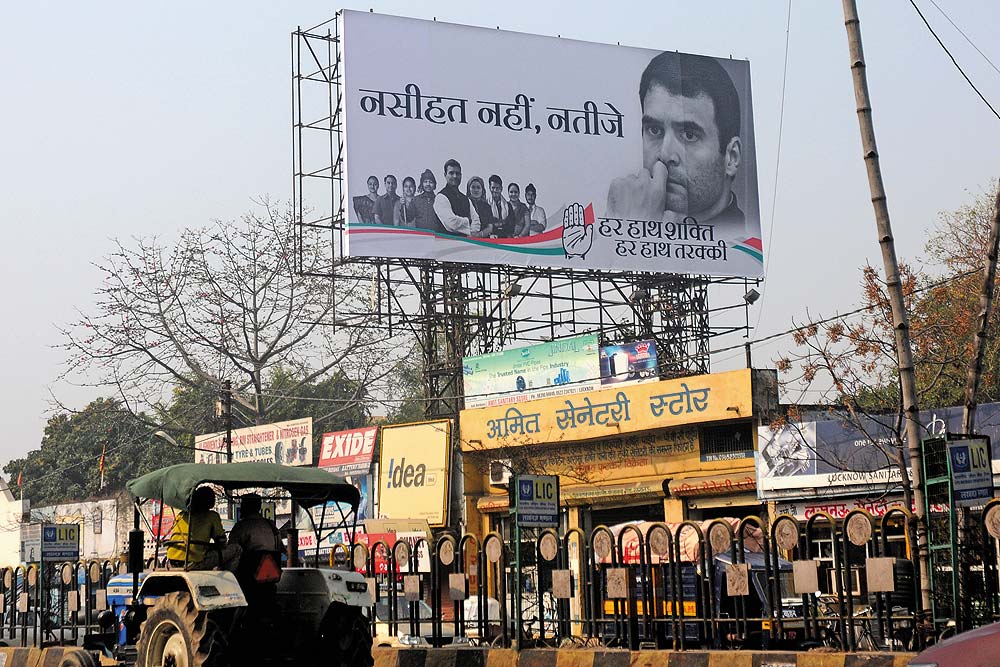 No show Results, not gratuitous advice. Didn’t help the Congress win in UP. (Photograph by Nirala Tripathi)

But before he seeks radical change, Rahul could perhaps heed the now overused words of the man he has in his surname: “Be the change that you wish to see.” The old guard might have outlived its usage but there is enough merit in what they say too. “He means good,” says the erstwhile minister from Man­mohan days, “but he can’t see what is good.” According to him, Rahul inhabits a cocoon that is insulated to the heat and dust, hopes and despair, caste and relig­ion and the dynamics of Indian politics. The former minister also believes that Rahul is surrounded by a certain set of technocrats “who deal with peo­ple like dots on a graph and Indian politics as some cryptic game theory. They are disconnected with the pulse of the nation and have clouded Rahul’s vision.”

He talks of inner party democracy, but he himself is a product of its absence, says a trenchant critic from the old brigade.

Access to him is also a problem, as several Congress leaders confirmed. For a year now, Sonia has been regularly sending partymen who come to her with problems to meet Rahul. But while senior leaders have to wait weeks to get an audience with him, he seems to have enough time for cricketers and film stars. Senior party  leader Kamal Nath confirmed as much in an interview to an English news channel. “When I go to Sonia with a problem, she says please go to Rahul. When I go to Rahul Gandhi, he says the Congress president will resolve (the issue).” Another says that when people who call on him with problems, he asks them to come up with solutions. “If they had the solutions, they wouldn’t come to him the first place, right?” he says.  “He is arrogant,” says yet ano­ther former cabinet minister, “constantly loo­king into his mobile. I wonder if he’s listening to me or not.” He also recalls how Sonia had to call Rahul’s key aide Kanishka Singh to ask him to call her back after he refused to take or answer her calls for three days.

Rahul also has Arvind Kejriwal as his role model, something Dig­vijay Singh confirms in the accompanying interview. “The Aam Aadmi Party invol­ved a lot of non-traditional people and we will learn from that...and will better it in a way you cannot ima­gine,” Rahul had said while addressing the media outside his residence after the first Delhi assembly debacle in 2013.

“There are thousands of Kejriwals in the party,” says a leader of the old guard, who claims to meet Sonia on a weekly basis. “He just has to open his eyes. People like Ahmed Patel are not a fly in the ointment. They make the party. Rahul may ‘hate’ them but the party needs them,” says a senior party leader from Delhi.

Sonia Gandhi finishes her tenure in June. She has made it clear that she doesn’t want another term as party president. Rahul is the clear successor. But the question remains: is the Cong­ress ready for Rahul minus Sonia’s ‘moderating’ influence?

The problem, as the former Union minister-turned full-time lawyer now sees it, is that Rahul “wants his mother to clean up after him”. The old guard wants Priyanka to step into the fray and save the party. But the Nehru-Gandhis are a close-knit family. Priyanka sees Rahul as the best bet for the party. She has confined herself to the constituency of her brother and mother—Amethi and Rae Bareli. Both mother and sister are solidly behind Rahul assuming the mantle of the party.

There is also no difference of opinion between mother and son on change itself, just the pace of it. While Sonia is for gradual change, Rahul advocates a radical shift. The change Rahul seeks in a hurry is the end of the Sonia era. But the end of the Sonia era may not come so soon,  says a former minister and vocal critic of Rahul in the party. “See who is taking the government head on?” He is referring to the Sonia-led all-party opposition march from Parlia­ment to Rash­trapati Bhavan agai­nst the proposed amendments to the Land Acquisition Act by the Modi government.