Off On A Hike

Correction is fine, but will rising rates impact growth and customer buoyancy? 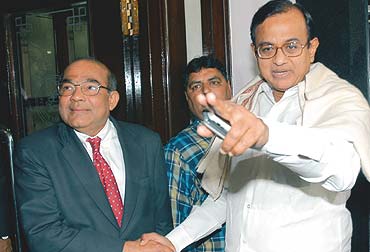 It seems that central banks across the globe have decided to inject interest shocks into their respective economies. Last Thursday (Aug 3), the Bank of England hiked its rate, as did the European Central Bank. This was, of course, preceded by two unprecedented increases in quick succession by the Reserve Bank of India which, for obvious reasons, led to an increase in banks' commercial rates as well as an upward movement in all personal and retail loans (cars, homes and consumer durables). When FM P. Chidambaram put his stamp of approval, India too seemed set for a high-credit era.

The immediate reaction was that the Indian hikes will impact economic growth by dampening investment sentiments and impeding consumer demand. "The move may help the government to achieve its objective of cooling down the economy or in forcing people to spend less and save more, but crucially it may also knock back some amount of consumer buoyancy," explains Rajiv Kumar, director and chief executive of Indian Council for Research on International Economic Relations, a Delhi-based government think-tank. "More bad news from the meteorological department of a prolonged spell of insufficient monsoon coupled with the successive interest rate hikes could have a very negative impact on the economy," he warns.

Experts like Kumar feel that a growing economy like India doesn't need high interest rates, as the real cost of capital is quite high. They'd rather have a slightly overheated, but booming, economy. But central banks, including RBI, think differently. For them, curbing inflation, which threatens to zoom on the back of high global crude prices, is more important. For these policymakers in pin-striped suits, controlling speculation in assets like real estate, commodities, even equities, is critical. Even if it comes at the expense of economic growth.

Almost all of them have hiked interest rates for two reasons: to suck out liquidity from the economy, and make it more difficult for people to get cash for speculative purposes. The US has hiked rates every quarter for the past few years. The European and Japanese banks have started doing that in the recent past. This was one of the reasons for the recent global correction in equities, commodities and bullion prices. It was also responsible for low inflation rates in the US. Now, the RBI also has got into the act. "The increase is in line with international interest rate movements," admits Andrew Holland, chief economist, Merrill Lynch India.

But the impact may be negative. The increase in interest rates implies that every individual loan—housing, car or personal—will be dearer. A 50 basis points rise in home loans mean you'll have to either repay your 15-year loan for Rs 15 lakh for another year at the same EMI, or increase the monthly payout by Rs 450. HDFC chairman Deepak Parekh had already said that he expected real estate prices to fall 20 per cent, partially due to the interest hikes, and put a check on spiralling speculative pricing. In fact, the RBI has been trying to check—or rather—correct real estate prices which in some cities have risen by 200 per cent in less than a year. It has issued several guidelines to banks to check malpractices in the housing sector, and also raised the risk weightages on many past occasions.

Even diehard optimists like Gaurav Mashruwala, a Mumbai-based financial advisor, are hedging their bets. "If someone has to buy his first house, I think he might delay the decision a little bit. But I don't see this having a big impact. A first-time home buyer doesn't have much of a choice but to buy the house finally. On the other hand, there might be an adverse impact on those who enter the housing market from an investment perspective. But we will still not see much of a lag in demand as long as salaries and job security remain strong," he explains.

However, Chanda Kochhar, deputy MD, ICICI Bank, feels the impact will be minimal. "Despite the increase in interest rates, there is no negative impact on loan growth. This past quarter we have witnessed a 35 per cent increase in the loan portfolio. This is because, while interest rates have increased, the affordability index for the average customer has also increased substantially. Looking solely at the context of the last two years, where interest rates have risen, draws an incomplete picture, because rates were higher 5-6 years ago," she explains.

Most bankers are more certain about the effect on consumer demand. "We may not see an immediate impact on consumer spend but we will see some lag effect of this interest rate tightening, particularly because the RBI policy has been indicative of further tightening on consumer spend. I think we can expect that sales volumes will be dented and consumers will have to rethink about the overall economics of taking loans to buy products or assets," feels Namrata Padhye, fixed income analyst, IDBI Capital.

If that's true, there'll be some impact on corporate toplines and, hence, bottomlines. Fortunately, experts don't see that translating into a negative investment climate. According to them, India Inc is depending more on internal cash accruals, overseas capital (although this may no longer be true due to high interest rates) and raising money from the equity route to finance its requirements for expansion and grassroot plants. Naturally, bank credit is not too high on its radar. "Companies could at best delay their capex decisions by a month or two. In the short term, the rate increase might have an impeding effect but won't affect the larger story," explains Holland.

According to a recent CRISIL study, until 2003-04, growth in bank credit led GDP growth in India by four quarters. What this implies is that credit growth translated into higher economic growth in the future. However, the relation between the two has weakened since 2004-05, possibly due to this change in industrial financing. As a result, the credit boom in the past 30 months hasn't contributed to GDP growth to the same extent. Therefore, the recent interest hikes might actually work in favour of the RBI and the FM: it may control inflation, but have little or no impact on economic growth. It may also be true that the recent credit boom has fuelled asset prices, and they too might show a correction because of RBI's tightening policies.

If this turns out to be true, it may also facilitate RBI's stated policy to give priority to "demand management, price stability, inflation expectations, and financial stability" and "maintaining the growth momentum". But the current interest rate regime in India may change if it begins to impact growth. For example, most monetarists are confident that the US Fed is only likely to raise interest rates the next quarter, and not after that. The reason: the US economy has recently shown signs of slowing down. Let's not forget that politics, like in the case of America that goes in for presidential elections in November this year, too will put pressure on most central banks—including the RBI—to go slow on interest rate increases in the near future.


By T.R. Vivek with Saumya Roy