Of Rebellion And Death 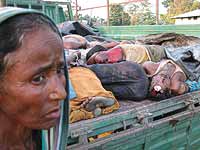 On October 27, Assam woke up to a terrifying dawn. The rather long lull, which the state had almost got used to, was broken by a violent storm as a group of heavily-armed rebels of the Bhutan-based National Democratic Front of Bodoland (NDFB) crossed the border in the Kokrajhar district and gunned down 22 unarmed villagers. They left behind 12 wounded survivors too. The very next day, a mortar bomb exploded in the highsecurity zone in Guwahati, sending the security apparatus into a complete tizzy.

The attack in Kokrajhar was, however, undoubtedly the more shocking of the two. According to survivor Babulal Yadav, the Bodo rebels had descended on Dadgiri village—about 100 yards from the border with Bhutan—at 1.30 in the morning, woken the villagers up, taken the male members of every household to a nearby pig market, lined them up and fired indiscriminately at them. While taking the villagers away, the Bodo insurgents had apparently told the women members of their families that "their men would be sent back in the morning".

Police officials say the ndfb has a major base in Bhutan, barely 15 km from the massacre site. According to them the rebel hit squad made its way back into this hideout after finishing with their bloody operation.

Chief minister Tarun Gogoi has said the flushing out of ULFA and NDFB rebels from their bases in Bhutan through a joint operation of Indian and Bhutanese troops is the only way to contain the violence. He added that unlike the international border with Pakistan or Bangladesh, the Centre was not taking Assam’s 266-km-long border with Bhutan seriously.