Entangled in corruption charges, the DMK finds itself paralysed both in Delhi and in Chennai 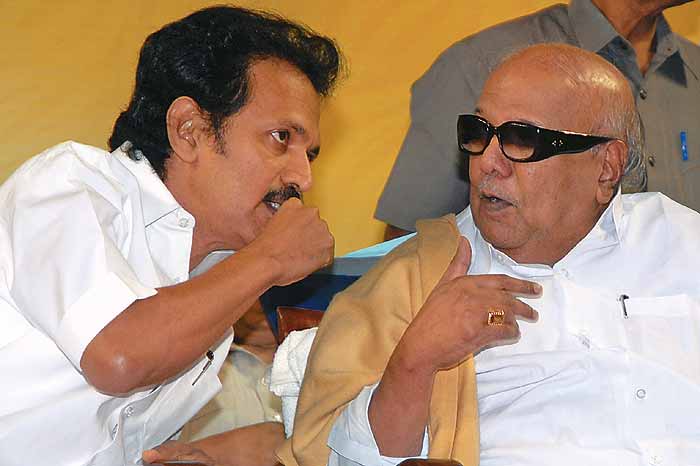 Nine months ago, the DMK was celebrating its victory in the Pennagram assembly byelections. The mood was upbeat, since Pennagram was the 11th successive byelection that the DMK-Congress combine won. Today, the party is in a bind, trying to sort out the several scams it is hit by. The 2G scam involving former telecom minister A. Raja heads the list but there is a housing scam too, where bureaucrats, even judges have got out-of-turn plots at below the market prices. What’s worse is that, in both these scams, the perception is that chief minister and DMK patriarch M. Karunanidhi’s immediate family is linked to them. AIADMK MP V. Maitreyan says, “The message has gone even to rural voters that the DMK is the fountainhead of corruption.”

Geeta Ramaseshan, an activist-lawyer, says, “The Raja issue itself may not affect the polls. But the family cronyism issue seems to bother people.” M.G. Devasahayam, a retired IAS officer, agrees. He says young people who come to the meetings of the recently set up Forum for Electoral Integrity are very concerned about corruption. “It’s advantage Jayalalitha, or so it seems, for public attitude is turning,” he says.

Karunanidhi’s problem is that, in the DMK, he has become the lone supporter of Raja. The party holds that Raja is innocent—although after the CBI raids, Karunanidhi has amended his fierce defence to say, “If the CBI investigation proves otherwise (that there is evidence of corruption), the party will not hesitate to take action. But, till something happens, we will not let down Raja.” Having secured his resignation because of the heat over the scam, the question observers ask is whether Karunanidhi will capitulate to the growing demands in his party to sideline Raja. Neither of his sons, deputy chief minister Stalin and Union minister M.K. Azhagiri, have publicly defended Raja. And what about his alliance with the Congress? Will it  survive the Raja mess? Or will the party move towards Jayalalitha?

Karunanidhi has been playing the Dalit card for all it is worth. Even this week, he said Raja was being hounded because he does not wear a “sacred thread”. But according to a prominent Dalit leader, that card could backfire. “The 20 per cent Dalit population is not going to be swayed. People want him to be treated as a common criminal,” he says. Raja has till now been chary of saying he was victimised since he’s a Dalit.

It’s a Catch-22 situation for Karunanidhi. If he dumps Raja now, it means he thinks he is guilty. If he does not, he will be hobbled when he faces the electorate in less than six months. But Karunanidhi has a personal dilemma. For him, Azhagiri, Stalin and Kanimozhi are all his children. Whereas for Azhagiri and Stalin, the dynamics are different and they have no reason to defend Raja, Kanimozhi or her mother Rajathi Ammal (Karunanidhi’s third wife), who have all been compromised in the Niira Radia tapes.

Whose Hand In The Pot?