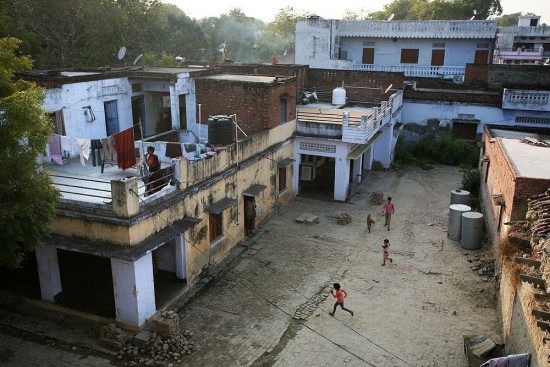 The village of ­Madhopatti, or Gaddipur as some call it, is in a frenzy. The narrow roads are being cleared and carefully lined with white chalk dust; chairs are being laid out on the porch of an apparently simple house; the village elders gathering around; and snacks and tea being arranged—all for the short visit of the village’s homegrown IAS officer Shree Prakash Singh. The tall, well-built, fiftysomething man is quick to arrive, and in style too—with a three-car trail, stepping out of an SUV with the official blue beacon light, clad in a black coat over a crisp shirt and trousers, security guard in tow, two iPhone 6s in hand. A lot of fanfare, greetings, and feet-touching, both by the congregation and Singh himself follows, and then calm finally restored. Everyone sits down for a round of catchup over the usual Bisleri, tea and sweets.

Shree Singh is the one of the 48 serving IAS and PCS (Provincial Civil Services) officers that this tiny village in Jaunpur, Uttar Pradesh, boasts of. It’s a village of just 75 households, members of which are serving all over the country. The first person to clear the civil servant exam was way back in 1914 when Mustafa Hussain, father of renowned poet Wamiq Jaunpuri cracked the Provincial Civil Services (PCS) exam. After that there was a big gap till 1952, when Indu Prakash Singh bec­ame the first to secure the highest rank, who joined the IFS and served as Indian ambassador in Spain, Burma and Nepal. But after that there has been no stopping Madhopatti, which has churned out over 200 IAS, IFS and other civil servants. “It is now an officers’ conveyor belt of sorts,” says Amitabh Singh, son of I.P. Singh and an IAS officer currently on deputation to Bangkok. How did it all start? “My father wanted to become a film star and ran away to Mumbai to live the dream. Six months into working with Ashok Kumar, he was almost abducted back by his unc­les who later convinced him to appear for the Union Public Service Commission exam,” says Amitabh. “Pre-Independence, the terms and conditions of joining were a lot more difficult to meet. After 1947, it opened up as a tenable career option for many in the village,” says Rajeshwar Singh, a teacher at the village’s Shri Gandhi Ram Niranjan Inter College.