Of An Inexact Science, Or How We Learn To Debate

Firm editorial control is a cure for the dangers of live TV, the inanities of anchors and politicians 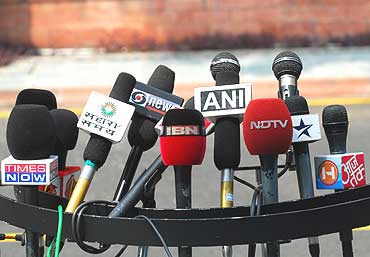 India On Television: How Satellite News Channels Have Changed The Way We Think And Act
By Nalin Mehta
HarperCollins Pages: 310; Rs. 395
Nalin Mehta says "television captures and publicises reality" and then hurriedly adds, "or what looks like reality". His book also examines the evidence that television can, in some circumstances, create reality. Reality is at the heart of the debate about television, and by that of course I don’t mean unreal Reality Television. Television can at best only be an edited version of reality, but those versions have consequences. The consequences are far from clear so it is important to debate them. Nalin Mehta does ask whether or not television contributes to violence, widens divisions in society, or encourages a political dialogue of the deaf by staging shouting-matches between politicians.

In his chapter on television and the 2002 Gujarat riots, Mehta discusses the copycat consequence of TV—the suggestion that telecasting violence encourages others to turn violent. He quotes the bjp government’s allegations that national television coverage had a copycat effect and Rajdeep Sardesai, then ndtv’s managing editor, making the case for journalists "to honestly report the facts and not be blinkered by government binoculars". Although Mehta does not reach any conclusion himself about the copycat effect, he does suggest three worrying factors which might have affected the reporting on Gujarat. The first was the inexperience of the journalists. According to Mehta, their average age was "around twenty-eight". The second was the inexperience of the TV channels. As Mehta says, they had no rules for live coverage. The third was the diminished role editors played. He does not say how far we have come since then.

The editor’s role seems to me something that still needs to be debated with civil society, academia, and—dare I say it as a journalist?—the government. Even with live coverage, the editor does have control over visuals and his reporters. As a reporter who has covered outbreaks of violence, I know the value of editorial guidance based on well-defined conventions. It would be interesting to know what Mehta feels those should be.

When it comes to the influence of television on politics, Mehta takes a positive view. Leaning heavily on Amartya Sen’s Argumentative Indian, he says "news television gives a new publicness to older traditions of debate and dissent". Discussing the history of those traditions, he cites Ashoka’s Buddhist councils as "some of the oldest public meetings in the world to find public means of resolving conflict through dialogue and reasoning". But television usually does the opposite. Producers and presenters encourage people to fight, not to reason. The name of one of the longest running programmes, The Big Fight, gives the game away. Its creator says, "You have to create some element of entertainment ...people shouting at each other...or some kind of conflict." Yet Mehta seems to think this is debate. He says TV in this country is specifically Indian and has its roots in India’s oral tradition. But surely political debate on TV copies the aggressive British style of verbal violence, with the presenter often joining in the fight rather than acting as the referee.

Mehta has interesting things to say about the use politicians make of television, and he describes how some who look good on TV and perform well have been able to leapfrog over senior but less comely and more voluble colleagues. Politicians do not underestimate the effect of television on their fortunes. But, as Mehta points out, measuring the effect of television is "an inexact science", and the effect can easily be exaggerated. He recalls the disastrous error the bjp made in the last election by relying heavily on their ‘Shining India’ campaign.

For politicians, it is important that measuring television’s effect becomes a less inexact science. It is important, especially in these violent times, to understand more about the copycat effect and the hazards of live coverage. Mehta believes we are hampered in this by "the satellite-size gap in the scholarship of Indian television". Others have worked to narrow that gap and Mehta has taken the process further, but there is plenty of room for India’s tradition of "debate and dissent" to discuss the issues he raises. It’s to be hoped that the debates will not turn into an academic slanging match, a sport academics seem to be as fond of as journalists and politicians are.