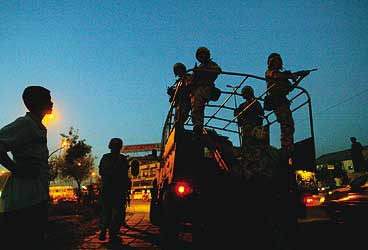 outlookindia.com
-0001-11-30T00:00:00+0553
Shortly after the bomb blast at the United Nations headquarters in Baghdad last fortnight, US secretary of state Colin Powell scurried to meet UN secretary-general Kofi Annan in New York. It was the first telling sign of the US making efforts to place the UN more squarely in the scheme of things in Iraq. Subsequently, at a joint press interaction, Powell hinted that there was fresh thinking in the US establishment for roping in more countries for the "nation-building" activity under way in Iraq. Annan, too, was optimistic about this move.

Months after displaying insouciance and pointing to the 31 countries that have contributed 21,000 troops to Iraq, Washington seems to be veering around to the truth: the support to it isn't global in nature merely because of the 21,000 international troops in Iraq, its ally Britain alone accounts for 11,000. It's also a force too insignificant to stabilise strife-torn Iraq. As an Indian diplomat remarks sarcastically, "It's really like reaching deep into your pocket for the odd one rupee or two rupee coin to add to the modest pile of coins on the table. It will take many such coins to reach even a hundred rupee figure. What they really need are thousands. The Yanks are certainly feeling the pinch."

That Iraq has begun to pinch and hurt the US was confirmed in an interview deputy secretary of state Richard Armitage granted last Wednesday. Armitage said the US was considering the concept of a multinational force under UN sponsorship as long as an American remained the UN commander. Armitage's comments and those of others raise the question: what conditions could persuade New Delhi to place troops in Iraq?

Washington's wooing of New Delhi never ceased, even though the cabinet committee on security affairs (CCS) rejected the request for deploying troops in Iraq. This was confirmed by state department spokesman Richard Boucher, who, on August 20, said the US government was looking for a "more explicit UN statement" because "some countries, like India, have already stated publicly that they might be looking for this kind of statement from the UN or more explicit authorisation from the UN...".

Boucher was essentially referring to the July 14 resolution of the CCS which, though rejecting Washington's request for troops, added a codicil: "Were there to be an explicit UN mandate for the purpose, the government of India could consider the deployment of our troops in Iraq." In other words, lack of domestic consensus on Iraq, or even the parliamentary resolution on Gulf War II, were not the reasons why the Indian government didn't commit troops to Iraq; it was the absence of an "explicit UN mandate". Says a source: "We had the troops doing table-top exercises and orientation courses and had even identified a force commander." Adds another: "There are some who are straining at the leash to send forces to Iraq."

To begin with, India is not necessarily looking for a classic blue helmet operation—a peacekeeping mission authorised and financed by the UN. This was hinted at by foreign secretary Kanwal Sibal who, during a major speech on August 21 at the Centre for United Nations Peacekeeping, New Delhi, laid out the parameters for determining India's response to the request for troops contribution to Iraq at a time when the nature of peacekeeping had undergone "something of a revolution". He explained that India was aware of the variable nature of UN mandates "from classic UN peacekeeping operations to UN-authorised multinational operations in the case of Afghanistan and operations outside the ambit of the UN such as the coalition forces in Iraq". Pointing to India's admirable track-record in 37 of the 56 UN peacekeeping missions so far, he went on to declare: "We would, however, be failing in recognising the realities if each and every decision of ours on peacekeeping is an automatic response to a UN request (and only to a UN request)."

Sibal's remarks explain what Powell, Armitage and Boucher have in mind—India could go to Iraq even under US command should there be an explicit UN request for this. But what precisely should the language of a new UN resolution refer to? Senior government sources say the following elements must be there in the new UN resolution:


The last, sources say, "will be about the trickiest but not altogether impossible". For instance, will Indians be asked to apprehend or kill those who are on Washington's list of 55 most wanted Iraqis—but whom the UN does not consider as such? Will it be incumbent upon Indian forces to, say, arrest Saddam Hussein should they come across him?

India is also keen that a request for broader participation, including stabilisation forces, should emanate from the Iraqi people (read the existing 25-member Iraqi governing council) and then recommended by the UN secretary-general. Sources also say that in the elaborate and intense consultations with the US, which preceded Resolution 1483 (that had the UN urging countries to contribute troops to Iraq), India and the US had managed to arrive at near-satisfactory command and control arrangements, albeit under the overall American command but taking into account Indian sensitivities on the tricky issue.

Sources add that were an explicit UN mandate to materialise, there was no reason for India to be confined to north Iraq. Anyway, Turkey is pushing Pakistan to accept deployment duties in the Kurd-dominated area which Ankara considers within its sphere of influence (see box). What is to be seen now is whether the US can satisfy India and whether New Delhi is prepared to suffer casualties in a country which it had been friendly with during Saddam Hussein's time and which is unlikely to return to peace in the near future.