Objective Observations By A Ludicrous Freak

Often, it all ends up as a strange, involuntary, one-man circus act by a bald white man 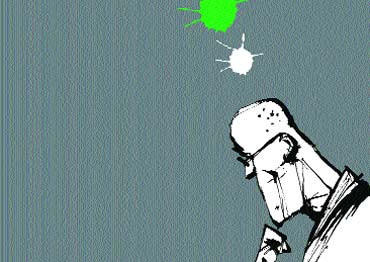 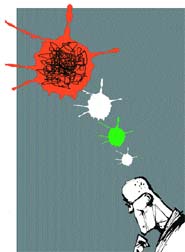 There is no one moment that has defined my experience in India, no epiphany when it was all made clear. Rather, my time here has been a confusing blur. A synaptic overload. In the course of my job (I’m a journalist), I travel to strange places and try to catch the essence of what is going on. I try to record a mental image of the scene—what the principals are wearing, what the hawkers are selling (and for how much), the particular sort of stink (nullah? body odour? diesel?)—and at the same time to get "the story". I’m not sure I ever succeed.

When I show up, everybody surrounds me to scrutinise my every word and gesture. Somewhere I have run across the idea that the presence of the observer has a subtle, often unreported influence on the phenomenon he’s meant to be observing. My experience is nothing like that. It’s more like the phenomenon I’m meant to be observing comes to a complete halt and normal life is replaced by a strange, involuntary, one-man circus performance by a bald white man. If I were to be truthful, I’d headline all my stories the same way: Objective observations made by a ludicrous freak, while ignoring the woman staring into his ear and trying to take notes with a serious and dignified air.

You think I’m exaggerating. But that is because Indians are capable of doing many things at once. You can conduct a heated argument while brushing off a beggar tugging at your sleeve, accepting a cup of tea from a servant and ignoring a religious figure of some sort who is chanting, setting something on fire, or just making some kind of piercing noise over a loudspeaker. You don’t even think about it. For you this is normal.

I’ll give you an example. Before the last national election, I took a taxi to Gorakhpur to write about Sonia Gandhi’s "road show". I’d managed to track down Salman Khursheed, then president of the UP Congress, and wangled my way into his fancy jeep (a Scorpio or Sumo or something) for the ride out to the villages where Sonia was supposed to whip up enthusiasm for her campaign. It was the only time I was going to have for an interview, and it wasn’t likely I’d get any time with Sonia herself.The convoy took off as though somebody had waved a green flag, all the drivers jockeying for a position close to Sonia’s car, bumping quarterpanels like some kind of khadi-clad nascar final. Every so often, a policewallah would come alongside in an open jeep, lean out like a polo player, and clout one of the Scorpios or Sumos or Qualises with his lathi to force it back in line. All the while, I’m firing interview questions at Khursheed and the other UP Congress bigwigs, with my eyes riveted to the road ahead so I won’t miss my last moment on earth. If I hadn’t had a tape recorder, the only thing I’d have gotten out of the whole experience would have been the thwack of a lathi on the roof and, when the driver made a move to off-road it through a deep ravine to inch closer to Sonia’s car, the sudden interruption of Khursheed’s erudite explanation of the caste equation in UP so that he could exclaim: "Mat karo! Mat karo!" Later, I listened to the tape. Sure enough, Khursheed had given me articulate, even eloquent, answers.

Another time, near Vidarbha in Maharashtra, I went to visit the families of some farmers who’d committed suicide. In one house, I remember, the man had killed himself only the day before, and his wife, probably in shock, lay without speaking in a bed in a darkened room in the back. There I was being shepherded around by an activist for the farmers who was really just a politician by another name. My usual circus-act arrival had attracted a lot of attention when we rolled in, and now we had an entourage of a dozen or so villagers who all wanted to go on record with the story of the tragedy. We trooped into the widow’s house, all the way to her bedside. It was a horrible invasion. But she didn’t react. If she had, she wouldn’t have been able to get a word in edgewise, there were so many people competing to tell me how bad things had become, watching my reactions, cataloguing the expressions of sympathy and concern I was able to muster. I was trying to look at the widow so that I could describe her in her anguish—steeling myself for a part of the job I’m not sure that I believe in—and everybody else was rubbernecking at me.

Sometimes, too, it’s the great Indian instinct for hospitality that throws my observations off kilter. I’ll be sent to a Dalit village someplace, or to the home of a notorious goonda, or to an encampment of bonded labourers, and everything will come to a stop as first a plastic chair is unearthed for me to sit on, then discarded in favour of a charpoy. Then tea appears. A conference develops: perhaps the foreigner won’t drink tea, foreigners get the loosies from all manner of things, and so on. The tea disappears and is replaced with Pepsi. Everyone talks at once. The translator summarises five minutes of narrative with a single sentence. I stupidly write down "woman in blue sari" and "boy in Nike T-shirt". I should be cutting my subjects, who earn all of 50 rupees a day if they are lucky, in on the proceeds from my article—which will affect a tone of outrage and perhaps occasion a coffee-table discussion or two. But instead they’re buying me Pepsi.

Those are, I suppose, after all, my defining experiences of India. It’s too immediate for definition. There are too many interpreters. Too many guides for me to look and listen properly. So I don’t experience India at all. I just try my best to stop it from experiencing me.

The Before, During And After