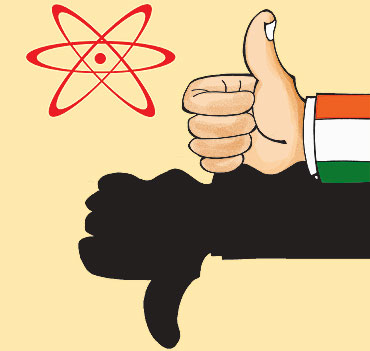 The truth is that Pranab is engaged in a game called dumb charades that children normally play. In it, each team mimics people or historical events in absolute silence and the other has to guess what it is. His charade is being played out to fool the dumb people of India into believing that the Congress did its best for the country and cannot be held responsible for letting it down.

Pranab knows perfectly well that the deal is now dead. The May 6 meeting was absolutely the last at which the UPA-Left could have given a green signal and hoped that the agreement could be completed before the Bush administration faded into history. The opportunity is now irretrievably lost. By not taking a decision at the May 6 meeting, the UPA government has effectively prevented the US from taking up India's case at the upcoming plenary session of the Nuclear Suppliers Group, in the third week of May. India has also missed the scheduled meeting of the IAEA board. Even if the Left gives its assent on May 28, it will be too late to get the India-specific safeguards agreement on the agenda for the meeting.