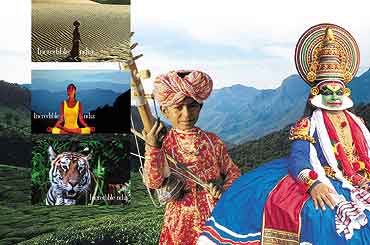 outlookindia.com
-0001-11-30T00:00:00+0553
It's an incredible duo. A no-nonsense minister who gets things done whether it's demolishing illegal constructions in the capital or building new infrastructure at select sites to woo tourists. And a bureaucrat who can take credit for transforming Kerala into 'God's own country'. Tourism minister Jagmohan and joint secretary in the tourism ministry Amitabh Kant have embarked on a mission to make India an irresistible destination for foreign and domestic tourists.

Named 'Incredible !ndia', the project is a new branding strategy to sell India as a premier tourist destination. The aim is to follow in the footsteps of nations like Thailand and Malaysia which successfully came up with clear brand identities like 'Amazing Thailand' and 'Malaysia, Truly Asia'. Both the number of tourists as well as per capita spends in the two Asian countries have gone up after their campaigns were launched with gusto. Now Jagmohan and Kant think they can do the same for India.

Explains Kant, "It is important to brand a country, and the word 'incredible' captures all that India has." In fact, working with advertising agency Ogilvy & Mather (O&M), the ministry chose the word after considering several options like 'mystical' and 'kaleidoscopic'. "Our brief was clear," says Vibha Desai, executive director, o&m. "We had to convey everything in a word that could be understood by different people across the world, even those for whom English was not the first language."

Pinpointing a unique identity was possibly the easiest bit. Now, it has to backed by aggressive marketing, a huge budget and a serious endeavour to improve tourism infrastructure in the country. The ministry seems to have thought about these aspects too. Admits Jagmohan, "Now there is going to be no general talk. We have to show specific results and for that implementation is very important."

By this year-end, a Rs 10-crore ad blitz will hit television, print and online media, designed to woo the international tourist. Simultaneously, India will be showcased under its new image at various trade fairs and travel marts. The entire campaign will focus on four critical themes under the overall umbrella of an incredible country. These include mind, body and soul (spirituality and yoga); heritage (monuments and cultural sites); the Himalayas; and wildlife.

In fact, the ads worked out by o&m show 72 visuals, ranging from tigers, beaches, desert scenes, the Taj Mahal and places of worship. The target in the initial phase will be Asian, European and American markets and the government has included publications like