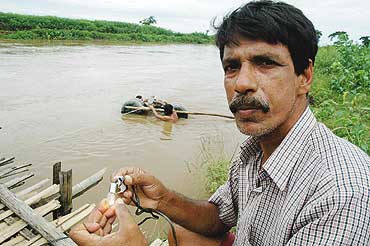 outlookindia.com
-0001-11-30T00:00:00+0553
Nripen Kalita began his career repairing television sets and other electronic items.Today, he is known as the inventor of the zero-head water turbine, a low-cost equipment that can generate power to light up rural homes and run pumps to irrigate farmers’ lands. "Every monsoon, as the water level in the rivers rose, I used to think of ways to utilise hydro power in a cost-effective manner," says Kalita. In 1998, he developed a water turbine using a bamboo platform to keep the machinery afloat. But he soon realised that using bamboo was not practical.

He then developed an advanced model and has transferred the technology to a local entrepreneur. In a live demonstration, Kalita gets his equipment—an iron wheel with rotor blades, some pulleys, an alternator and a lot of wires—lowered into the river water, with two hollow plastic drums attached to the device to keep it afloat. The rotor blades start moving, lighting up a bulb and turning on a pedestal fan. Kalita has applied for a patent for his innovation but there are bigger dreams too: "I have developed a spinning device that runs on both alternate and direct current. This will be useful for the weavers in Assam." He also wants to create a ‘solar gasifier’ that can use the sun’s energy to generate gas for cooking.