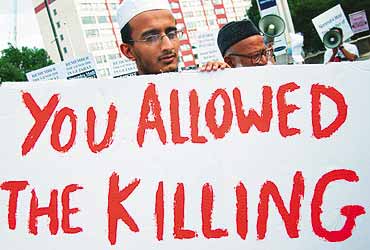 Modi came to win support for his new campaign for a "vibrant Gujarat". That meant, among other things, an invitation to overseas Gujaratis to invest, and deliver him from the infamy of having played the devil for a state that he is supposed to have nurtured. Modi set a very Hindu flavour to his calendar, beginning with a meeting held by 'Friends of Gujarat'—which included no Muslim friends—and concluding with a visit to a temple in Watford just north of London. Modi visited this temple, donated to the Hare Krishna movement by former Beatle George Harrison, on the night of Janmashthami.

People have been worshipping Krishna so far as the playful god, the one who played the flute and sang with the gopis, he said in his speech here. "But times have changed. The time has come to worship the Krishna who wielded the Sudarshan Chakra." Modi gave a new flavour to birth celebrations for Krishna. Bharat, he said, "is the land where you do not have prophets, you have God himself taking birth".