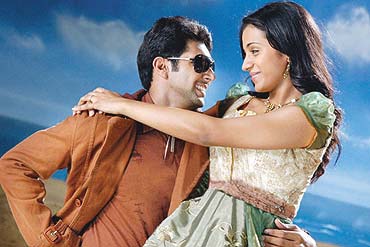 A Tamil film released last week, Unakkum Enakkum Something Something (Something Something Between You and Me), overnight had to drop its ‘English’ baggage. They were forced to after the M. Karunanidhi-led DMK regime announced in its budget that "full exemption from entertainment tax will be given to new films if they are named in Tamil". The producers of the Trisha-starrer thought it prudent that ‘Something Something’ be culled from the title. Karunanidhi’s predecessor J. Jayalalitha had wooed the industry with various sops—banning video piracy, reducing fees on outdoor shooting and showering awards just ahead of the May elections. Significantly, Jayalalitha seemed to have also had better criteria for granting exemption. Her government’s 2004 budget had announced that low-budget films with "good themes useful for social mobilisation and propagating good values" will qualify for the exemption. The industry, of course, did not bother to rise to the challenge.

Predictably, the latest move has found favour with the industry. The critics, though, have ridiculed it. "All you need to do is name a film in Tamil, its content be damned, and claim exemption," wrote a columnist. They point out that now even a soft-porn title, Avaludan Iravugal (The Nights with Her), can be exempted. Karunanidhi, who claims credit for the Centre bestowing classical language status on Tamil, seems to have gone too far this time. The new move will cost the state Rs 75 crore a year. As much as 90 per cent of the revenue accrued from entertainment tax is allocated towards local administration.