It's vintage Vajpayee, but this time the politics of gestures will not suffice 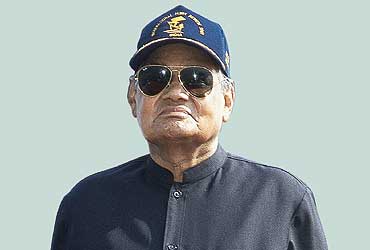 outlookindia.com
-0001-11-30T00:00:00+0553
When Prime Minister Atal Behari Vajpayee decided to invite Pakistan's ceo Gen Pervez Musharraf to India, New Delhi deployed what may be one of its last options in its search for a political solution to the Kashmir imbroglio. In doing so, the PM has overturned his Pakistan policy, hoping that the risky decision could help buy time for the government and open new avenues for engagement with the people of Jammu and Kashmir as well as Pakistan.

Last week's invitation to Musharraf was indeed Vajpayee's masterstroke—some, though, would call it desperate—to save what is his only ticket to history. When the suggestion for talks with Pakistan popped up at the now-famous luncheon meeting last Wednesday (it was attended by Vajpayee, defence and foreign affairs minister Jaswant Singh, home minister L.K. Advani and national security advisor Brajesh Mishra), no one had expected it. Sources say nobody, not a single person in the policy loop, was aware that the government would invite Musharraf for talks.

Nor did anyone object to it as it was the only way to get around the stalemate in the government over Kashmir. For one, Advani had just got his way on the ceasefire, the prime minister finally having been convinced that the ceasefire was unsustainable. Consequently, Advani couldn't be perceived to be sabotaging the peace process now that it no longer restrained the security forces in the Valley. The foreign minister had recently demonstrated his ability for radical thinking by endorsing George Bush's nmd initiative. Any opposition to the talks would have gone against his profile.

More important, diplomatic sources say the US has all along been privately urging New Delhi that as the more mature, bigger and stronger of the two, it only behoved India to give Musharraf another chance and once that happened, Washington would provide all reasonable help for the initiative. This was the message inherent in Washington's refusal to brand the Lashkar-e-Toiba a terrorist organisation. It testified that New Delhi's policy to isolate Musharraf in the global arena had failed.

Compulsions apart, most sections in the government were surprised at Vajpayee's complete turnaround. Till early last week, the government had been arguing that it was Musharraf who was desperate for political legitimacy, both domestically and internationally, and that it could come only if Vajpayee decided to bail him out. Now that Vajpayee has swept aside the dearly-held tenet—no talking to Pakistan unless it stops fomenting violence in Kashmir—and extended an olive branch, it is unclear who will be bailing whom out and how.

The decision, predictably, has thrown bureaucrats into a tizzy, unable as they are to reconcile themselves to Vajpayee's decision to overturn his Pakistan and Kashmir policy. By inviting Musharraf, the government has at last acknowledged, albeit implicitly, that Pakistan is a real factor in many ways in Kashmir. Says Mirwaiz Umer Farooq, who "personally" welcomes the development and solicits universal support for it: "We have all along been insisting Pakistan is party to the problem."

The offer of talks is ultimately based on the belief that Musharraf could prove to be reasonable, that he would be willing to play ball with New Delhi. Kashmiri leaders feel that Musharraf is a decent and reasonable man. For instance, the Mirwaiz says Musharraf is the first Pakistani leader who has gone beyond the UN resolution, testifying to his flexibility.

Government officials, however, have their own reason why they think Musharraf can't but behave reasonably. Says a senior official: "When Musharraf comes, he will have to appear reasonable. He is no position to impose conditions. In our view, he has more to explain to us and the world (about terrorism) than we do. We have reason to believe that we can make progress."

What will be on the agenda when Musharraf comes calling? The calculation is that the foreign secretary-level talks have yielded precious little except a body of documents. This time, the personal and political impulse at the highest level will be driving the process. There will be the matter of personal chemistry and Vajpayee, though he felt betrayed after Lahore, is keen to create conditions for productive dialogue. And that is why he did the unthinkable.

Says a senor official, "Our main strategy will be to consolidate on the international opinion that is building around us positively. Once this happens, India and Pakistan will be locked in a process from which neither will find it easy to walk away without incurring international opprobrium. In other words, the first to blink loses."

Says Prof Kanti Bajpai of Delhi's Jawaharlal Nehru University, "Both will have to put Kashmir centrestage and address India's concerns on security. In that sense, they will have to reinvent the earlier package (of composite dialogue), break the ice and chalk out the agenda for talks in a manner which each can sell domestically."

At the same time, G. Parthasarathy, a former envoy to Pakistan, cautions that the problem with Indo-Pak summits is that the political leadership, and those around them, tend to raise exaggerated expectations. "In dealing with Musharraf, we need to bear in mind that not only is he in no position to displease an army establishment dominated by the protegee of Islamists and hawks and, at the same time, given his strained relations with major mainstream political parties, he cannot do anything that will offend the fundamentalists and jehadis."

Was there any other alternative? One view holds that a preferable option would have been to wait and watch through the summer months, the peak season for jehad. It could have given New Delhi time to carefully observe the situation on the ground, especially in regard to cross-border infiltration. And that the invitation to Pakistan could have been extended after Islamabad had demonstrated a measure of restraint in this period.

The reaching out to Musharraf came after the government explored the internal dialogue process aimed at settlement between New Delhi and the people of Kashmir. This saw two phases—the first was expected to accommodate the politically extreme sections among the Kashmiris, groups like the Hurriyat as well as the Hizbul Mujahideen. It was only after this that New Delhi was to talk to Islamabad. The entire process hinged on the hope, so far unrequited, that the Hurriyat would carve for itself a bigger political space, travel to Pakistan, spread the message of peace and then return to settle for a large dose of autonomy.

Paranoid that the Hurriyat would make peace with New Delhi, Pakistan managed to ensure that no such thing happened. Now, as Musharraf prepares to meet Vajpayee, he can legitimately claim that India's efforts at placing preconditions to dialogue has been frustrated. This is something he can sell politically.

But will an Indo-Pak summit alone resolve the Kashmir problem? Hurriyat leader Abdul Ghani Lone is pessimistic.He feels that so long as there is a divide between the two most politically powerful men in the country—Advani and Vajpayee—on how to proceed on Kashmir, it would be difficult to work out a solution in which everyone is a winner—India, Pakistan and Kashmiris.

Before turning to Musharraf, Delhi played its K.C. Pant card but the Hurriyat didn't take the bait. Says Lone, "His mission does not address the core problems, nor has it impressed that section of Kashmiris whom the PM spent six months in wooing: the alienated Kashmiris." For example, the statement issued on April 5 notifying Pant's appointment as the government interlocutor did not categorically acknowledge the seriousness of the Kashmir problem.

More notably, the government has been coy about whether the dialogue between Kashmiris and Pant was without preconditions. The exact formulation is a bureaucratic delight: "The government notes that the aphc has all along taken the position that talks should be unconditional. Now that the government has agreed to hold talks in the interest of early restoration of peace, it is for the aphc to consider whether it would not be inconsistent for them to set preconditions for dialogue."

Shabir Shah, in his initial attempt at political footsie with the government, seemed keen to have Pant define various aspects of the Kashmir problem. He wrote that Pakistan, India and the people of J&K had to be part of the process; that the problem could not be treated merely as a law and order one; that if the problem could be sorted out and resolved by engaging the "in-line-with-India insignificant element in Kashmir", the problem wouldn't have become as big as it has now. But his most acerbic accusation was that Pant was "diluting" the proposed dialogue with Kashmiris to that of a political monologue. In effect, Shah argued, the chief negotiator himself would be able to better present the viewpoint of those whom he was talking to and, therefore, ultimately uphold the status quo.

Both the Mirwaiz and Lone say they can't be a party to Pant's efforts and wonder why Shabir is eager to get on the bandwagon. Says Lone: "At the moment, Shabir is the flavour of the month. They are using him to convince Indian public opinion that the dialogue is on and the separatists are on board. In 1996, the government made such a song and dance about Babar Badr, Bilal Lodhi, Imran Rahi and Ghulam Mohinuddin Lone. Nobody knows their address now, postal or political."

But, ask government officials, in a democracy, how can any one political entity claim to represent the sum total of interests of a people? They also say "the Hurriyat will now come down to earth. Their importance will dwindle. There is no doubt about that. This (talks with Musharraf) will put a lid on the rubbish it has been talking lately."

Officials now maintain that instead of talking to Pakistan's puppets, the government will now directly talk to the puppet masters. Lone said: "My trip to Pakistan made it sufficiently clear to me that the charge that the Hurriyat is sold to the Pakistani thinking is a baseless one and therefore wrong.In fact, whenever I didn't agree with Musharraf, I differed with him openly." Yet this does not take away from Sheikh Aziz's abject toeing of the Pakistani line on his trip there and the consolidation of Syed Ali Shah Geelani's hardline constituency during the six months of ceasefire.

Lone concurs that the offer to talk to Pakistan has come after the gradual unravelling of the peace process. "The government of India's interlocutors conveyed to us that New Delhi would not stand in the way of the Hurriyat going to Pakistan." Once this didn't happen because of Advani's objections, the Pant committee was appointed. And once this appeared to be reaching a political dead-end, the Pakistan option was picked up.

Agrees the Mirwaiz, "I find the decision to call Musharraf surprising. They refused to accept that Kashmir is a trilateral problem, they turned down our request to visit Pakistan and now they've done what we wanted to do in the first place." Both the Mirwaiz and Lone scoff at the suggestion that the Hurriyat would be marginalised or that, as Advani has said, it wants to be a mediator. "We are the primary party. We are the affected party. We are at the receiving end. How can we be mediators? This is an absurd proposition," says Lone emphatically.

But Lone will have to wait and see the path Vajpayee and Musharraf want to tread. He says that from here on, "both Musharraf and Vajpayee will be on test". That would overturn some of the glib assumptions inherent in that political ad about Vajpayee—"tried, tested, trusted", three words that mean three different sets of political values to three different sets of people (Indians, Pakistanis, Kashmiris) all grappling politically with what to do about one word: Kashmir.