Fielding is an indication of how a team is feeling. It hasn't been very positive. 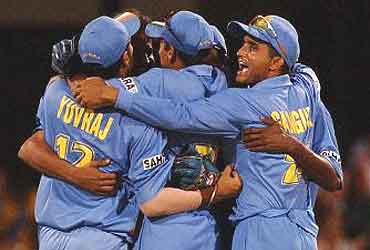 outlookindia.com
-0001-11-30T00:00:00+0553
Although the VB Series has only reached the halfway mark, everyone is aware that the rest of the league phase and the finals will be a shootout between the Indians and the hosts. This does not mean that the intensity which has marked all the encounters between India and Australia will be missing at the WACA in Perth, where our last league encounter against India will be played on Saturday.

While it’s great to be in the finals, the fact that one team, Zimbabwe, is out of the running so early in the tri-series does not augur well. Zimbabwe have been struggling in the absence of Andy Flower, and none of their batsmen have fired so far. The lower order and the big-hearted captain Heath Streak are doing their level best, but the results are not coming their way simply because there has been no score of substance from the top half of the order. It was sad to see crowds thinning for encounters involving Zimbabwe during the series, and I hope they recover some form soon.

Our new-look opening pair was only for Sydney. We have a long season ahead and the management has decided to give some squad members a break whenever the team can afford it. Since last Sunday’s game was at Brisbane, Matthew Hayden’s hometown, we decided he could have a break during which he could look after a few niggles, spend time with wife and children before getting back to the squad recharged and fresh for the final phase of the tournament. I expect him to join us at Adelaide for our double-header there.

The Brisbane loss was a little disappointing for us since we were ahead of the asking rate for a larger part of our chase. Matthew scored an excellent century, but he just did not get support from anyone for long enough. We have been having some great practice sessions and meetings over the last week, where we discussed the areas we are going wrong vis-a-vis our bowling. We have plans for most of the batsmen in the Indian squad, but we have not executed them well enough, the reason why the Indians have been thriving right through this summer.

The team had a number of sessions where each player spoke to the coach and myself, so that we could gauge how they are feeling both mentally and physically. Quite obviously, players like Rahul Dravid, V.V.S. Laxman and Sachin Tendulkar have carried the confidence they gained during the Test series into the one-day series. This means our bowlers are really being challenged, and as captain I have to really take care of them during this tough phase. I had a couple of meetings with Brett after the Brisbane game, where he went for over 80 runs. It was an amazing display by the Indian batsmen, particularly Laxman, Tendulkar and Dravid, where all our bowlers went for many runs. However, 80-plus was unacceptable, and Brett was the first one to admit this and seek suggestions. I gave him a couple of suggestions and it was heartening to see him immediately take these tips on board. Shortly after speaking to him, I saw him working on the points that I had made during our talk.

It’s great for a captain to see such a positive reaction to his suggestions, and I think a good performance from Brett is just round the corner. For instance, he was touching the high 140s pretty consistently at the Gabba, and his rhythm was back. It’s now just a question of getting his line and length back. During our team meeting, we also spoke about fielding, an area we pride ourselves in, but one in which our performance has been way below par. Crucial catches have been dropped, and we are not hitting the stumps as often. When the bowlers take on a top quality batting line-up, it is imperative that the fielders back them up by converting half-chances into dismissals. For me, our performance in the field is always a big indicator to the way the team is feeling. It gives me an idea of the energy language, and I must admit that our body language has not always been positive in the first half of the tournament, and we need to improve on it as we approach the finals.

The main area of concern is restricting the Indians right now. We have identified our inability to take quick wickets at the start of the innings as the main reason for their big scores. Early breakthroughs would put them on the backfoot, but that has not happened in this tri-series. We have come up with a few new ideas, which I will keep under my hat right now, but we must learn to stick to these plans for longer periods. The consistent performances from Michael Clarke and Brad Williams, two of the newest members of the team, was the biggest plus to emerge over the last fortnight. This shows that Australian cricket is in good health, and when veterans like Warne and McGrath return, the team will have the ideal blend of young guns and old warhorses. We have some hectic touring coming up, so a few pairs of young legs in the side will only help our cause.

Off the field, every sportsman in Australia has been deeply affected by the tragic death of David Hookes. For many in the team, the loss was a personal one. Jason Gillespie, who is a South Australian, has known Hookes right from the time he was in school. Ian Harvey, who plays for Victoria, has been coached by Hookes for the last two years and is deeply shocked by the news while our assistant coach Tim Nielson was Hookes’ mate during their first-class days.

Being a celebrity at a public place is not an easy thing, but the Australian public generally lets a well-known person be, especially when he is enjoying a quiet drink at a bar. However, there have been a couple of incidents around the country which runs contrary to the image of Australians being a laidback lot, and this is a worrying trend. There are cases when people try to needle a recognisable figure or even try to pick up a fight. Just a few weeks ago, Jeff Finech, a well-known Australian boxer and a really relaxed guy, was forced into a messy situation at a restaurant, but got away with a few bruises. As a team we are aware that there might be the odd idiot around who will try and needle us and get us involved in an argument. We always avoid such situations and confrontations, but quite obviously turning the other way is not an option at times. That was perhaps what happened with Hookes that fateful evening, and our thoughts are with his family at this difficult time.

Thoughts of this dashing personality, who also brought the game of cricket alive with his riveting, animated commentary for a generation of Australians, will remain with us for a long time to come.