He had the corporate backing. Now he’s claiming God on his side as well. But will He be swayed by Modi’s invocations? 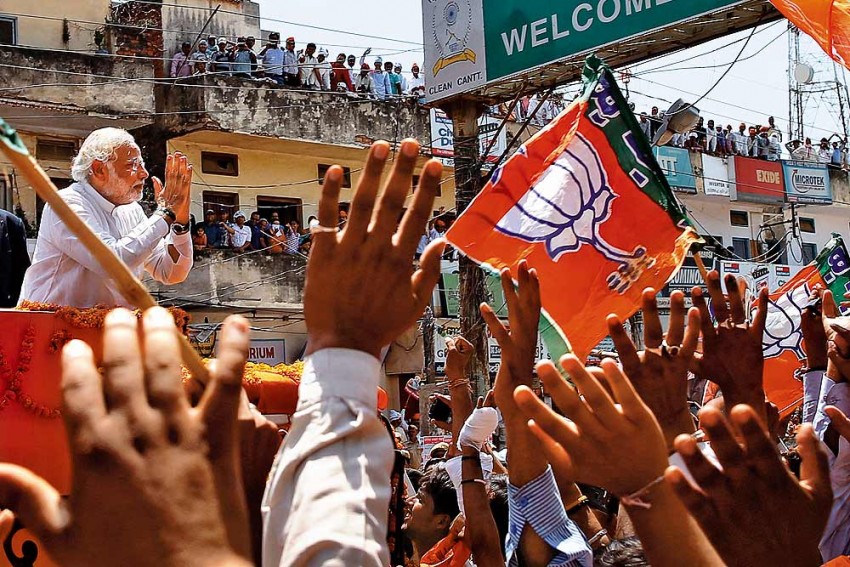 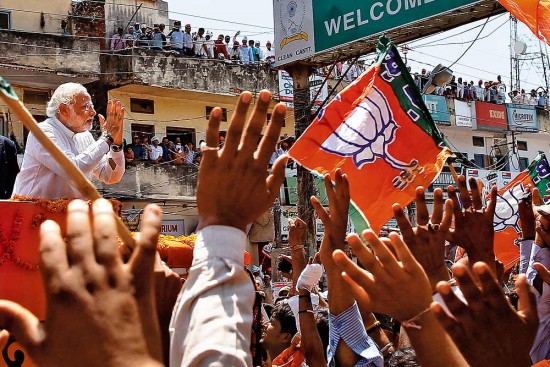 Finally, God entered poll discourse 2014 after Pakistan, beef, the media, opinion polls, the Gujarat model, corporates, communalism, badla, scams, policy paralysis, development, empowerment had run their course. Perhaps the over year-long campaign—rolling since Narendra Modi’s third consecutive win in Gujarat—worth thousands of crores of rupees on the social, electronic and print media must not have been proving eno­ugh. The big capital-backed superhero of the BJP, the RSS already with him, drafted God too on his side just before the third phase of polling to fight the assorted paapis of the UPA and the alleged third front. (Paap or sin, and never secular words like crime or illegality, is Modi’s favourite epithet in his campaign speeches to characterise the transgressions of his rivals.) And so it was that God made an appearance in a 3D invocation that was telecast across the country: “God chooses certain people to do the difficult work. I believe God has chosen me.” And if God be around, can Ma Ganga be far behind? It was she apparently who urged him to file his nomination papers from Varanasi, and the matrubhakt that he is, could he have done otherwise? One could almost hear Gujarat’s brand ambassador Amitabh Bachchan mull that old question anew: “Tumhare paas kya hai?” “Mere paas God aur Ganga ma hai”.

The Bollywood-style voice-modulated delivery of lines, playing to the lowest common denominator in the gallery, the close-ups capturing the crafted animation of his face, the macho stride up to the front of the stage and the television screen, the messiah-style raising of arms while leading the slogan-shouting, the pageantry, the costume drama, the chan­ging plumage of all headgear except the skullcap, the crowds waving and screaming on the ground or strategically atop poles as the camera approaches, so panned as to show only the densest poi­nt in the crowd, never their extent...each Modi rally or roadshow is a carefully choreogra­phed surge of support and passion tailormade for television. No wonder then that in the land of spectacle and tamasha, which dominates our wor­ship, our rites of passage, our socialising, entertainment and public life, a spectacu­larly mounted surge via old and new media first generated great recall and then started reflecting in myr­iad opinion polls, mirroring each other at angles that made the image larger than life, and creating a bandwagon effect on the ground.

Such a kaleidoscope of spectacle, the mobilising of multitudes, the jet-propelling of the protagonist of Ele­ction 2014 to far-flung corners of the country on a single day, ensuring their telecast on hund­reds of TV channels, or in their lieu, 3D hologram add­resses across multiple locations, the thousands of stormtroopers on new media, the full front-page ads in major newspapers or the thousands of audio-visual publicity vans with GPS roaming the countryside where television outreach is limited...all of it needs megabucks. And Modi has had no dearth of corporate moneybags backing his blitzkrieg. The campaign from above has been reinforced by the all-out effort of thousands of RSS volunteers on the ground as well as hired teams of unemployed youth. It’s a wonderful fusion of the green of corporate lucre and the saffron of new-age Hindutva to get the Modi flag flying over the country.

Of course, the Congress rout in the recent assembly elections, and the BJP’s win in three states helped too. It so demoralised the Congress camp that many of its big lea­ders abdicated campai­gning altogether. Elsewhere, the Modi juggernaut edged the Aam Aadmi Party out of old media space and the BJP’s spin doctors magnified some of the fledgling party’s self-goals. In fact, they managed to turn the screws on them even more; the poor AAP chaps have been beaten up every other day and moreso since Arvind Kejriwal’s foray into Gujarat.

In the light of all this, it’s not surprising that there is a surge in the NDA seats in the numbers our punters are giving now over what they gave the formation in Septem­ber. Of course, the NDA has expanded since from a five-party alli­ance to a 28-party one, with footprints in the south too (though none among the new allies is a big regional players save the TDP).

Yet, Modi has felt the need for divine intervention. But even God is shy in helping him turn the footprint in the south and east into a foothold necessary for him to form a government. Even in the north, despite the huge str­ides, there is shaky ground: in Punjab, Bihar, Delhi, Himachal and J&K, for instance. Even UP. Modi seems within striking distance, but whether he makes it depends on whether the leaders of big regional parties—beyond the now-exp­anded NDA—will warm up to God’s chosen one, given the compulsions of their mass base or their own ambition.

Diehard Modi fans, of course, would wonder why big chunks of the electorate and several politicians would not naturally choose the Almighty’s deputy.

Delhi-based Neelabh Mishra is the editor of Outlook Hindi

‘BSP Will Hold The Key To Government Formation’