Now, In The Direct Line Of Fire

Who needs an Opposition when you have friends in the Sangh attacking every move the PMO makes? 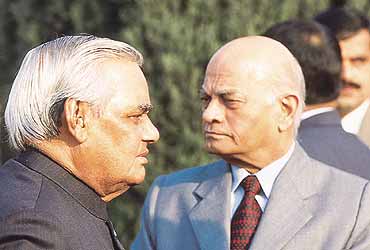 outlookindia.com
-0001-11-30T00:00:00+0553
The Prime Minister’s Office (PMO) is well aware of the irony. Both Atal Behari Vajpayee and the PMO have been targeted by friends. As a Vajpayee aide points out, "The criticism is not so much from the Opposition as it is from the bjp’s friends." And this, he says, has hurt the prime minister no end. "If it was the Opposition, then Vajpayeeji could have taken them on. But what can he do when friends attack him?" he asks.

The PM’s aides do not deny the negative impact such criticism has on the functioning of the prime minister. Points out a PMO spokesperson: "These attacks are not very helpful as they tend to undermine the PM’s position, especially when he is already doing such a difficult balancing act keeping the nda together." According to a source close to Vajpayee, the PM was particularly upset at Singhal’s attack in Rajkot last month where he accused Vajpayee of being a "kamzor (weak) PM" and criticised him for not taking adequate steps to curb terrorism. Adds a PMO spokesperson, "The PM is a popular leader and enjoys a strong position within the nda. Naturally, he is disturbed when his own people attack him."

Which is probably why the PM cleared his sore throat in time to attend a crucial dinner meeting with the RSS on October 24. At the meeting, VHP-RSS-BJP relations came up for much discussion. According to sources, the PM emphasised that attacks from the Sangh parivar only undermine the credibility of his government. However, it was also decided that there should be more interaction between the PM and the Sangh parivar affiliates in order to iron out any problems. This is seen as a triumph of sorts by the VHP and the RSS.

Interestingly, neither Singhal nor hrd minister Murli Manohar Joshi were present at the meeting. The two have been making the most noises of late. While Singhal demanded the ouster of the PM’s principal secretary Brajesh Mishra, Joshi has been very vocal in his criticism of the government’s disinvestment policy.

The PMO, however, does see a silver lining. According to a spokesperson, "The very fact that none of the issues raised by the parivar has been picked up by the Opposition goes to show that there is no credibility in the charges raised." Unfortunately for the government, the Shiv Sena, one of the bjp’s allies, is only too keen to make up for this lapse on the part of the Opposition.

According to sources in the PMO, the one reason why the Sangh and its offshoots targeted the PM is that so far, none of their demands has been met. Despite all the hue and cry, the government did not yield on the Ayodhya issue. And in spite of the RSS criticism, the PM has come out strongly in favour of the disinvestment policy. And Mishra is still very much in the PMO.

For the moment, though, the Sangh parivar is happy that it did raise its voice and it was heard. Enough for Vajpayee to come forward and smoke the peace pipe with senior RSS leaders.