Now, For A Palace Coup

These 19th century trappings, you'll agree, are relics to be dispensed with in a modern democracy. 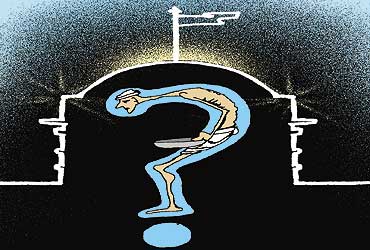 outlookindia.com
-0001-11-30T00:00:00+0553
Dear Citizen Abdul Kalam,
You have just become the Rashtrapati of over a billion co-citizens of this nation, the vast majority of whom live in frugal circumstances. If the monsoon fails this year, as seems increasingly likely, tens of millions of your co-citizens will be struggling to find drinking water and some 300 million, who are already malnourished, will be facing semi-starvation. It's evident from your frugal lifestyle that you've not forgotten the humble surroundings of your childhood and that the poor and vulnerable are of concern to you.

In keeping with your sensitivities, you should refuse to live in the most palatial property provided for any head of state in the democratic world. The White House in Washington and Buckingham Palace in London and their grounds are toy properties compared to the 400-acre estate of Rashtrapati Bhavan, with its gigantic central sandstone structure of durbar halls and cavernous rooms, surrounded by a sprawling complex of large official bungalows, military barracks, Mughal Gardens, a golf course, tennis courts, club, theatre, printing press, school and many other facilities. It is an extravagant town within the privileged city of New Delhi. One thousand staff members and another 2,000 soldiers and policemen maintain, guard and carry out ceremonial functions at Rashtrapati Bhavan. The British built it in their last imperial fling. For a democratic republic, it is a colonial anachronism.

Though your monthly salary is only Rs 50,000, the cost of operating the presidential estate and secretariat in New Delhi and two other presidential mansions outside the capital amounts to almost Rs 1 crore a month, not counting the separate payments for the military and security staff. The break-up of the annual presidential budget is Rs 5.84 crore for maintenance, hospitality and miscellaneous expenses; Rs 3.29 crore for the secretariat; and Rs 1.60 crore for the 'Rashtrapati Nilayam' in Hyderabad and 'The Retreat' in Shimla. Sixty-five per cent of the total expenditure is on staff salaries and allowances.

An independent soul like you would find it particularly galling to be constantly accompanied, except when you are in your bedroom or bathroom, by uniformed ADCS and liveried chaprasis, much like a spoilt infant escorted by starched ayahs. These 19th century trappings, you will agree, are relics which should be dispensed with in a democracy professing modern values. The most powerful figure in the world, the US President, or even the heir to the 1,000-year-old Chrysanthemum throne, the Emperor of Japan, is not surrounded by a retinue of costumed personnel.

Too many of your predecessors—including those professing socialist values, like V.V. Giri and K.R. Narayanan— have revelled in the superficial glory of colourful pomposity. As a people's President, you ought to move away from the false rituals of living like an oriental potentate. You could make a sharp and clean break in your first week of office by promulgating a self-denying presidential ordinance depriving yourself and future presidents of the use of Rashtrapati Bhavan and its estate, drastically cutting down all presidential expenses, reverting the highly trained and disciplined officers who serve as ADCS to their true military duties and redeploying the cavalrymen of the President's Bodyguard as a fully operational armoured corps regiment. You could also restrict your state visits abroad to only those expressly required for explicit, diplomatic reasons of state and not turn them into numerous summer tourist jaunts.

You will initially face a mighty uproar from ministers, politicians, bureaucrats, senior military officers and other staff members. The political leaders will regard the presidential ordinance as a disastrous precedent which would expose their own luxurious lifestyles and grasping behaviour maintained at the taxpayer's expense.But they will dare not prevent such a popular ordinance from being passed into law as they would not like to be publicly seen as defenders of princely privilege. The officials, defence services officers and staff who currently enjoy the joys of living on the Rashtrapati Bhavan estate will be particularly incensed. Innuendos will be spread by politicians and officials about how you are harming the honour of the nation and lowering the status and prestige of the President's office. You will be able to brush aside these self-serving protests as you will in effect have greatly raised the dignity of your office in the public eye and India's standing internationally by setting an example of simple living and high thinking.

Besieged as our society is by the financial scams, unbridled greed and crass consumerism of the wealthier groups, you could point the nation and, particularly, its political class towards a new era of state propriety and frugality. We could move out of the classical Third World syndrome of an opulent state amid teeming penury.

As for Rashtrapati Bhavan and its vast estate, you could persuade the government to turn it into Asia's most advanced paediatric research and medical care centre, befitting your concern for the well-being of children. The Mughal Gardens could be converted into a wondrous adventure park where the poorest youngster could enter that dreamland which is the birthright of every child.

As for yourself, you and your reduced staff could function securely and conveniently from one of New Delhi's sprawling Lutyens' bungalows. Visiting foreign heads of state and government could be comfortably accommodated at one of the city's many fancy hotels. Ceremonial parades for foreign dignitaries could be restricted in size and number and performed at the Ramlila Grounds in full public view. New cabinets could be easily sworn in at Vigyan Bhavan which is presently under-utilised.

Yours sincerely,
A hopeful citizen