Home  »  Magazine  »  Sports  » team india: preparations »  Nothing Rummy About It

Nothing Rummy About It 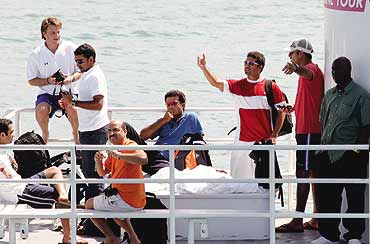 outlookindia.com
-0001-11-30T00:00:00+0553
Sourav Ganguly knows a few things about anxiety and the price it can exact from Team India. Some four years ago, he led an Indian squad that was on the threshold of winning the World Cup. He knows better than anyone else that India came a cropper because it was over-zealous about pulling the rug from under the feet of reigning champion Australia. "The ghost of the 2003 final will not be in our dressing room," Ganguly told Outlook in Port of Spain as the team waited for its first game. "We are starting a new tournament and are backing ourselves. We will be surprised if we don't do well at this World Cup."

The top guns have all been working at ensuring that the team does not get too stressed waiting for its tournament to begin, even as all the other sides have got cracking with a game each. "We don't need to guard against anything. We must not worry about things that are not in our control—injury, time, weather," said Ganguly. "It is a pretty long wait for the first game, especially in conditions that are similar to our country. But we don't have to worry."

Coach Greg Chappell nods in agreement. "The guys have enjoyed a few days of peace and quiet before the tournament, so in a way that's been good," he told Outlook. "It's been a nice change of pace from the point of view of what happens on a normal tour, particularly in India, where you are playing every three days. We have been doing things you would expect to do in the West Indies, things that sometimes the guys don't get an opportunity to do. We've been relaxing, swimming, sailing and snorkelling. And yes, we have had some batting and bowling practice. We have had some good preparation for the tournament."

It helped India that it reached the West Indies quite early, and got acclimatised to hotter weather than at home. The time the team spent in the Caribbean, winning both its warm-up games and training at different grounds in Jamaica before it moved base to Port of Spain, has also helped the core group and the fringe both settle into an easy camaraderie—not an insignificant factor on a big tour like this, given the latent sources of pique and tension. India may be the last of the major teams to launch their World Cup, but it hasn't bored itself to death or chewed its nails to extinction.

"A little bit of tension can be helpful," Sachin Tendulkar said. "Like everyone else, I am keen for India to win the World Cup. I have everything I need in the drawing room in my Bandra apartment but the World Cup. I believe we have it in us to go the distance." This belief gained ground after the comprehensive nine-wicket victory over the West Indies in the warm-up game that energised the team. Even though it would have liked a longer workout against the home side, India took a lot of positives from that win against a side that had trounced it 1-4 in the ODI series in the Caribbean last year. "We have the players with the ability and the mental strength to see India through to the semi-finals. That will be the first step for us. After that, it can be anybody's game," Chappell says. 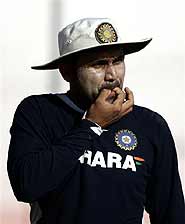 The team has thrown a protective, almost hermetic ring around the two men who have not been able to pull their weight—opening batsman Virender Sehwag and left-arm swing bowler Irfan Pathan. A lot of positive talk has dominated the team hotel's corridors and the nets as the squad aims to get these players regain the self-confidence that made them match-winners not too long ago. The team has backed these players to come good when they get the opportunity on the big stage.

Trinidad & Tobago—which is currently marking the 161st year of the arrival of Indian settlers in Trinidad, and indeed, the West Indies—is expecting India to do well at the World Cup. "We are happy to be in Trinidad," Dravid says—but without sounding like he's pitching for a diplomatic post after retirement. "We enjoy a lot of support here. We are looking forward to playing our group games here and I think the atmosphere will be very exciting."

Away from the glare of the spotlight, he and his think-tank have worked hard to ensure that Team India banishes that irritant called anxiety from its quiver.