Notes From The Soil

Patriotic songs and lyrics have reflected the truth of the times 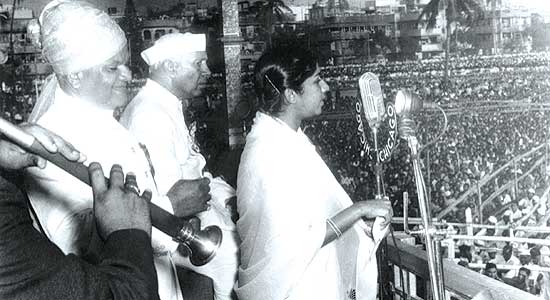 Perhaps one of the most oft-quoted nationalistic songs, not from a Hindi film, but a creation of film industry bigwigs, has been Ai mere watan ke logon. Written by Pradeep and composed by C. Ramchandra, it was a homage to the Indian soldiers who died in the Sino-Indian War of 1962. Legend has it that Prime Minister Jawaharlal Nehru had tears in his eyes when Lata Mangeshkar sang it at Ramlila Maidan in New Delhi on Republic Day in ’63.

It’s difficult to discount the emotional power of a desh bhakti geet, be it an Afghan lament for his country that we can empathise with, as in Ai mere pyaare watan (Kabuliwala, 1961) or a plain desi Bharat humko jaan se pyaara hai (Roja, 1992). These affecting tributes also have a way of finding continuing resonance. For instance, songs like Ai watan ai watan, Mera rang de basanti chola(Shaheed, 1965) and Ab tumhare hawale watan saathiyo (Haqeeqat, 1964), eloquent tributes to sacrifices for the nation, moved many decades later, during the Kargil war of 1999.

Some songs tug at the heartstrings and recall the values of nationhood in a more subtle, less overtly patriotic way. With its melancholic Sufi notes, Maula mere le le meri jaan, in Chak De India is a poignant conversation with the nation by a wronged citizen, a Muslim hockey player mistakenly supposed to have sold a win to Pakistan. He claims to have been loyal, devoted and integrated enough to be the third colour (teeja rang) of the tricolour. Then why, he asks, the accusation?

Lyricist Jaideep Sahni claims this song is his journey back to the ideals of the Indian Constitution and a lament for how far removed we are from them now. “My thoughts stem from the preamble which defines India as a secular, democratic, republic, assures equality, justice and liberty to its people and pledges to promote fraternity,” says Jaideep. “Why then do we keep questioning the minority community and its patriotism? Just because we have the strength of numbers? Such mobocracy is not what we signed up for 60 years ago,” he says.

It’s an uncomfortable thought to build a nationalistic song on. But like Jaideep, many lyricists, past and present, have tried to take the theme of nationalism beyond partisanship. Their songs are neither jingoistic nor chauvinistic; they try to deal with a more complex and profound idea of India. This is a nationalism that expresses itself by reflecting reality and critiquing and questioning political systems and social norms.

“We can’t sing false songs. Nobody buys the slogan Mera Bharat Mahaan because you know 100 mein se 99 beimaan,” says lyricist-singer Swanand Kirkire whose Bande me tha dam in Lage Raho Munnabhai called for a return to Gandhi as a cure-all. So we have songs of cynicism, dissent and even subversion, songs of the Great Indian Dream coming undone. But at the bottom of it, they too are an expression of love for the nation. “Any song which shows concern for society, which deals with the significant issues of the day, is patriotic,” says writer-poet Javed Akhtar. “Art that is built on dissent is an integral part of a mature democracy,” says Jaideep.

It’s difficult to discount the emotional power of a desh bhakti geet that unabashedly celebrates the country.

A striking expression of this is Piyush Mishra’s powerful poetry, in Gulaal, one of last year’s talked-about films. His song Yaara Maula is a hard-hitting recreation of how the impressionable are incited to violence and hatred: Phir wo aaye bheed ban kar, haath mein the unke khanjar. Bole phenko ye kitabein, aur sambhalo ye salakhen. Another song in this film, Sheher, is a gut-wrenching description of what happens during communal violence—the town prefers to curl up, sleep and shut its eyes even as it rains blood on the streets. The lyrics are a provocative indictment of what the poet sees as the biggest scourge of modern India: communalism. “The songs document 20 years of change, after Ayodhya brought the communal demon to the fore,” says Piyush. While dwelling on the madness of the times, he also pleads for level-headedness and reasonableness in the song Duniya: Chutput si baaton se jalne lagegi bacha lo yeh duniya. “I have to reflect the truth of the times, otherwise my poetry has no meaning,” he says.

Gulaal’s songs hark back to the spirit of the revolutionary poetry of the ’50s Hindi cinema, influenced by the radicalism of the Indian People’s Theatre Association. Piyush takes off from where Sahir left when he wrote Jinhe naaz hai hind par woh kahan hain in Pyaasa. It was all about the poet’s dreams of a just and equitable India shattered by reality. He expressed the pain of disillusionment once again in Phir Subah Hogi (1958). The plight of the dispossessed found poignant expression in his Chino-arab hamara, hindostan hamara, rehne ko ghar nahin hai, saara jahan hamara. In recent times, Gulzar referred to the tragic repercussions of Punjab militancy in Maachis (1996) in the song Chhod aaye hum wo galiyan. All in his characteristically lyrical, graceful way.

In contrast to the stinging critiques, there have also been songs that have tried to show us the way out—through solidarity, individual responsibility and collective change. Like Yeh jo des hai tera from Swades (2004), a call to come back—not just to the land but also to its value systems, ideals and principles. Or Phir Subah Hogi’s Wo subah kabhi to aayegi—a dream of the dawn that will usher in renewal and hope. A dawn that still eludes us....