Notes From A Mindwar

Russian soldiers, who served in Afghanistan, warn the Americans about the hell-hole 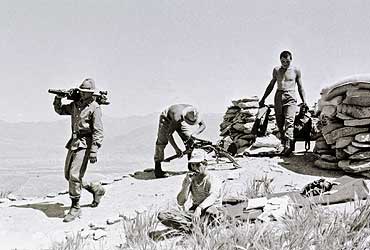 outlookindia.com
-0001-11-30T00:00:00+0553
Old ghosts have returned to torment Russians. Their souls have turned febrile, healed wounds have burst open. Dark memories have been rekindled, more vivid and powerful than the TV images—of the Russian army rumbling into Afghanistan, of a million soldiers who fought a futile war on its treacherous terrain, of the 15,000 soldiers who were killed and thousands others incapacitated. They touch their scars and ponder over their inability to feel, they know the Afghan war was Russia's apocalypse, its Vietnam.

When Col (retd) Vladimir Izmailov watches US President George Bush gird his nation for an onslaught on Afghanistan, when he hears him talk about smoking out the enemy, he says, "Americans should consider our horrendous experience. The US will have its second Vietnam." Izmailov was part of the Vitebskaya paratrooper division which was among the first to enter Afghanistan in 1979.

Initially, he had found the invasion to be something of a cakewalk. Rugged Afghans couldn't match the prowess of the Russian arms, its guns and tanks. Wiser now, Izmailov has a word or two for Bush and his men: "When the first American bomb falls on an Afghan village and kills innocent civilians, then you will see them unite and fight. Even their enemies from the Northern Alliance will join them."

Make no mistake, the Russians were vanquished not by the superior firepower of the Afghans but by their indefatigable will, their ability to wage a relentless guerrilla war. Col Nikolay Peshkov—one of those permanently scarred by the Afghan experience—figured that out early, and decided to concentrate on just staying alive.

But there were many who were weaker and less resourceful. Says Segei Osadchy, a communications officer who served in Herat: "A friend of mine exploded himself with a grenade leaving behind a letter for me. The letter said, 'I've become a coward. People like me shouldn't live. I only beg you to tell mom that I died like a hero'."

The fate of ordinary soldiers was perhaps even worse. Vyacheslav Popov was captured just four months after he had been posted to Afghanistan. Two years later, he was released: Popov converted to Islam, married a Muslim woman and now works in a Moscow mosque. These days he watches TV and relives his nightmares. He scoffs at cnn and says: "It's easy for their reporters to talk about a World War III, because they haven't been there. I would feel roasted in the sun there, I endured weeks of unending drought, living in a mud hole for days, eating food that arrived when it could."

Popov says even the four months of action he witnessed was traumatic. The population hated the Russians; it was impossible to recruit informers because they feared the wrath of the mujahideen who had no compunction in burning an entire village only to set an example. For how long, Popov asks, can you keep pounding the unarmed, keep killing those who are not scared of death?

He particularly remembers the day on which he and his comrades entered a village that had been bombed, only because it was suspected of harbouring mujahideen. What they saw instead were women dragging their dead and injured children out of the destroyed houses. On seeing the Russian soldiers, they stopped the rescue operation and huddled together silently. "God, they thought we had come to kill them," groans Popov. "I remember I fell on my knees and started crying and promising them that if I see one more Russian plane, I'd be the first to fire at it.... I can't believe that the US is going to do the same cruel things to them all over again."

Afghanistan taught Popov humanity. But it rendered Col Peshkov even more brutal. After surviving Afghanistan, he returned to Russia and consulted the army doctor. "He told me that I was suffering from depression, that it would stop haunting me. But all I could feel was hatred. I went to Chechnya to go on killing more people. Now I realise I can't do anything else. I have no other hobby, no other fate, no other job than to kill those whom I don't know." He stops and ponders and then adds, "I am no pacifist. But sometimes I think what my life would've been had I never gone into that hole."

But the hardheaded in the US will tell you that American soldiers must go into Afghanistan; that they must fight to uphold the pride and might of America. Says Izmailov: "My experience of Afghanistan tells me that you can fight terrorism only through secret services, not a regular army. And it should be done without much noise, without all those TV reporters, without cnn live shows. This struggle should be covert." But Bush wouldn't be reading this, and his men and TV channels, anyway, need a spectacle bigger than the terrorist attacks on the World Trade Center.