Not Quite The Satanic Verse

Hopefully, the work would be read not only by all those who are interested in understanding essential strands of early India's cultural dynamics, but more importantly, also by those who are fast emerging as Satan 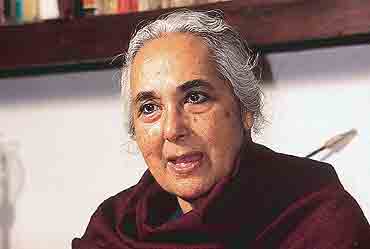 Early India: From The Origins To AD 1300
By Romila Thapar
Penguin India Price: 395; Pages: 592
This thoroughly-revised version of the author’s classic A History of India, Vol I must be welcomed for its timely arrival when the country is battling with renewed attempts to mythify history and redefine the parameters of the Indian nation. The new version closes at c. AD 1300 instead of AD 1526 as in the earlier version. Considering the space devoted to this period in the two versions, the present edition has almost been doubled. More maps and figures; a reasonably comprehensive, up-to-date and more systematically arranged bibliography add to its freshness.

The earlier version gave an impression that the whole text was planned in a broad political frame, though material and cultural developments through the millennia were never ignored. A nomenclature-related rethinking is now visible in formulations seeking to focus on broad contours of socio-economic and politico-cultural developments. The post-independence writing on early Indian history has been enriched through analyses of the lives of commoners. Thapar familiarises the reader with the emerging new vocabulary. A thrust on archaeology providing tangible data in the form of artifacts and material remains; the study of oral traditions—distinguishing between ‘frozen’ (Vedic) and ‘more open’ (epic poetry)—along with fieldwork; the use of linguistics as a tool for historical reconstruction, particularly to question the notion of communities and their identities being ‘static’: all this has made history-writing challenging, its reading fascinating.

The fourth chapter (‘Towards Chiefdoms and Kingdoms, c 1200-600 BC’) is an effective refutation of many fanciful ideas that are being touted around about the indigenous origins of the ‘Aryans’; and how the glorious ‘Aryan culture’ is identical with the Harappan culture. Here, by carefully sifting data from linguistics, the vast corpus of Vedic literature and archaeological evidence, Thapar presents a nuanced construction of two different historical processes: invasion and migration.

Thapar devotes considerable space to several issues involved in the socio-political formations during the millennium stretching from AD 300 to 1300. After all, paradigms of ‘Indian feudalism’ and its alternatives such as segmentary state and integrative polities’ have been the focus of writings in the last five decades. Thapar, while making her positions clear, is never dogmatic. To illustrate, while she is unconvinced about the sustainability of segmentary state and integrative polities as pan-India phenomena, she wants a reconsideration of the long-forgotten hypotheses of the two phases of Indian feudalism (‘feudalism from above’ and ‘feudalism from below’).

Further, amidst all the excitement about agrarian expansion during this millennium, she provides a timely reminder about "diverted attention from pastoralism", which was quite important in the "interstices of agrarian areas and in some hill states". She stresses on the transformation of pastoral clans into castes of cultivators. This, indeed, is just one of the many perceptive observations on mutations of varna and jati through India’s long history that is a running theme of the book.

Barring a few typographical errors, this competently produced volume is marked by Thapar’s lyrical narrative. She writes, "A fundamental sanity in Indian civilisation has been due to an absence of Satan." Hopefully, the work would be read not only by all those who are genuinely interested in understanding essential strands of early India’s cultural dynamics, but more importantly, also by those who are fast emerging as Satan.