Not Much At Steak

Is the indignant liberal in residence really better than a Sanghi? 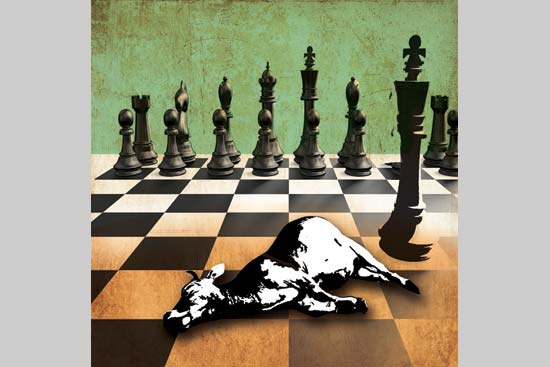 Here are the reasons why the grandstanding beef-eating liberal is as removed from reality as the lumpen, violent anti-beef-eating Hindutva mob:

1 Internet Hindutva vs Twitter Liberati: They are the most feted couple on social media, as they go hand in hand, complementing each other with their conservative vitriol and liberal contempt, vile bullying and mannered hand-wringing; they have built a relationship that is fruitful to both—as they furiously write, retort, quarrel, brawl or post, so, is it any surprise that the liberati’s following is in direct proportion of the trolls they trap? And, vice versa? It is also why public discourse, in response to the murderous Hindutva mob, has been reduced to “I eat beef”, “I have Muslim friends” or “I have Christians and Muslims in my building”. The lib class has all the advantages of being in power to smash conse­rvatism in politics, judiciary, media and activism, but instead stick to polite posts: enough to show you’re on the other side. Hindutva mobism is a wet dream for idle liberals.

2 Beef Bully and Cote de Boeuf: Hindutva is nothing more than chauvinists and fanatics who force down the spurious belief that Hinduism is only about holy cows and a pathological hatred for Muslims and other minority communities, among other historical grudges and loathing; and they have conveniently used symbols derived out of culture to mislead the vulnerable, defenceless masses. In this manipulated, coerced environment of cow worship, it’s nuts to talk to the people about eating steaks to make a point. Of course, the issue is about the freedom of food choi­ces. But people are not going to make a better choice by throwing a beef joint in the face of fanaticism. There has to be some semblance of a cultural familiarity for people to recognise and make the better choice, perhaps it could have helped if the liberati had made a forceful counter-attack when the beef bans first began to be legislated in many states.

3 Bootcamp vs Charade: Hindutva fanatics make no bones (!) about their religious-cultural machismo and fierceness with brutality, but is the liberal’s unflagging solidarity the only weapon they possess? And why does this correctness and unity ring hollow in the face of aggressive bigotry? Whether it’s online solidarity or ideological alliances, the liberals fail to lure the uncertain citizen. It’s because, as a wise office boy in a newspaper office once revealed, of their own elitism and contradictions. The famed Editor (can be swapped for CEO, COO or MD in any corporate company) is anti-union, anti-labour; there are harsh contractual agreements between management and employees where overnight sackings, drastic pay cuts at the bottom and lavish payouts at the top are the norm; the skewed caste and minority representation in work environments make a sham of the preaching of the bosses. At least the bigots are a tad more straightforward, was what he said.

4 Lumpen Louts vs Boutique Activism: The Hindutva mob has built the grievance industry, thus creating an enemy for the poor and jobless to focus their anger and attack; but does talking about climate change or beef steaks counter the provocative mob propaganda? What does the liberal stand for today? Which political party is the liberal loyal to? The answer is, shockingly, to the ideas and party that ensures its survival. Ever wondered why the cloying libber is comfortable with the Congress even as the party winks at sneaking communalism (no Srikrishna report on Bombay riots of 1992 or justice for Muzaffarnagar 2013), caste atrocities whether in Haryana or Maharashtra where it ruled for 10 and 15 years until a few months ago? They have failed to articulate a credible alternative, even pouring scorn on entities like the Aam Aadmi Party, which threaten to derail the gravy train. Remember, privileged libs have privileges too.

5 Rabble-rousers vs Boho Radicals: Even as Hindutva zealots rake up  hatred among people and communities, buoyed by a silent Narendra Modi government and friendly collaborators in the states (just look at the kid-glove handling of the hate-filled Rama Sene in Karnataka, ruled by Congress, or of the explosion of communal riots in UP under the Samajwadi Party), the Libs continue to believe they are the keepers of the nation’s conscience by their mere utterances. Or no one in their right mind would question with such bloated indignation why the meat from Akhlaq’s house was sent for lab testing (it’s a murder investigation for god’s sake, not a morality tale) or get all teary when the murdered man’s son declares his love for the country! The air of smugness and moral superiority is thick, but is this what liberalism stands for? Where are the big, bold ideas that can take on the lumpen fanatic, who is not just illiterate but savage? It’s the pedestrian liberal that has become establishment while the true liberal is fighting it out in the streets, academia, grassroots movements, legislation, courts. It’s time to kick the squatters out, take a stand and reclaim the turf for the enlightened latter.

There’s No Meat To The Vegetarianism Myth