Not Exactly Virgin Soil To Plough

BSY is Karnataka BJP’s face in the battle for power. The party doesn’t want signs of its past mistakes to re-emerge. 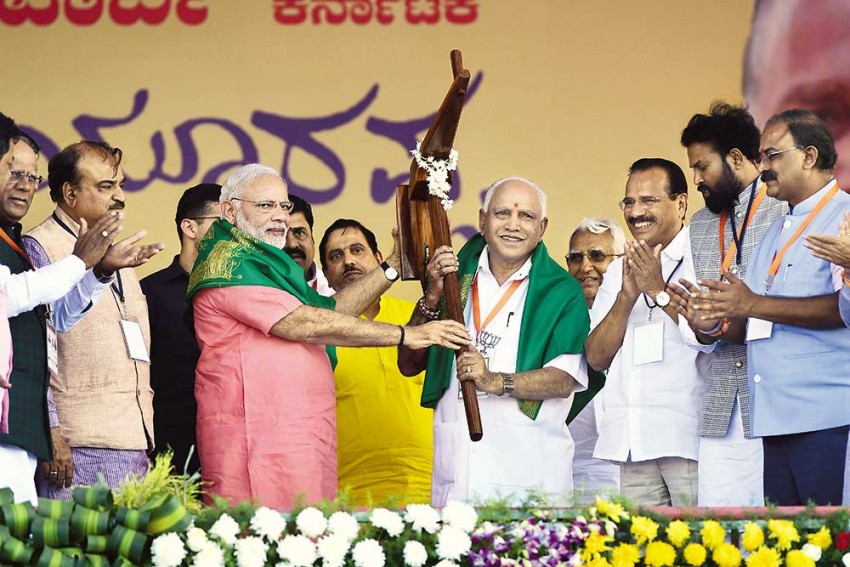 Vikas Jodi
That is how the slogan goes for Yeddyurappa, Narendra Modi
Photograph by PTI
Ajay Sukumaran April 11, 2018 00:00 IST Not Exactly Virgin Soil To Plough 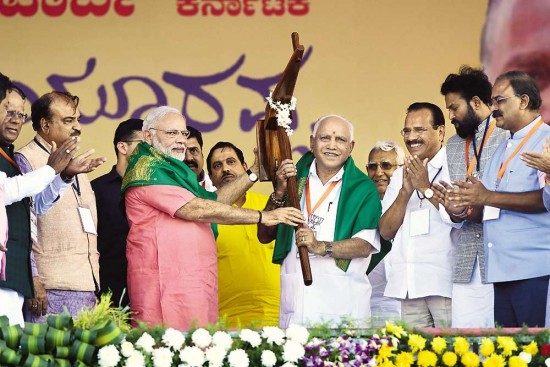 Five years ago, when the BJP went to elections in Karnataka as the ruling party, things were at the party’s ebb—a ‘suicidal moment’ as one insider put it. Its voteshare had fragmented into three pieces and its image severely dented, in stark contrast to a Modi wave sweeping acr­oss the country at the time. In the years since, the graph of its best-known face in Karnataka has been on the upswing: B.S. Yeddyurappa clawed his way back into the party to become its state chief. Now, as the rhyming slogan goes, the ‘vikas jodi’ (pair) in Karnataka is ‘Yeddyurappa-Modi’.

The reasons for that are pretty obvious. The 75-yer-old Lingayat leader, a former chief minister, has significant clout among his community members who form 17 per cent of the electorate. Yedd­yurappa is easily the only state leader in the BJP with a mass appeal cutting across communities. He is a tireless cam­paigner, having criss-crossed the state several times over the past year. So, the BJP insisted that the unofficial age limit of 75 years, which it applied to other veterans, wasn’t relevant in Yeddyura­ppa’s case. Of course, the ‘baggage’ from his previous ruling stint still dogs him, making him vulnerable to the taunts from the main rival, CM Siddaramaiah, much as the BJP stresses that Yeddyura­ppa has been cleared in all the corruption cases against him.

But even with Yeddyurappa at the forefront, the party’s approach has changed in the meanwhile. It is the central leadership that is micromanaging party affairs now. As observers reckon, that makes the BJP in Karnataka look more like the Congress of yore, where local leaders had to fall in line. The key challenge for the BJP over the past week, as candidates for the May 12 assembly elections were being decided, was to give the final touches to a difficult merger of the three fragments the party had split into five years ago. To observers, the BJP in Karnataka has never really managed to smoothen out its internal bickering though the party bosses in Delhi have managed to keep a lid on it—the most visible example being the tussle between Yeddyurappa and K.S. Eshwara­ppa, the two leaders from Shimoga.

“One of the biggest challenges of the BJP, ever since Yeddyurappa broke away from the party and came back, has been these internal divisions,” says political commentator Sandeep Shastri. “In some sense, the ticket distribution will be an important test of unity in the party that the central leadership is trying to impose, if you may,” he says.

Some bit of history. The BJP’s leaders in Karnataka have long had a fractious coexi­stence that came to the fore when the party emerged as the single-largest in the 2008 elections, but still fell (tantalisingly) short of a simple majority in the 224-seat assembly. While they made up for the shortfall by engineering defections from other parties, the tussle for power among groups only intensified. Through its turbulent five years in office, there were numerous occasions when the central leaders had to step in to douse fires—on one occasion in 2009, even dir­ecting Yeddyurappa, who was then the CM, to cut loose some members of his coterie, who had been given prominent positions, so as to keep the peace.

In the 2013 elections, the BJP was redu­ced to 40 seats after both Yeddyurappa and Bellary leader B. Sreeramulu went their separate ways to form the Karnataka Janata Party and BSR-Congress respectively. Between the two, they dented the BJP’s chances in over 30 seats especially in central and north Karnataka.

“If you add the votes of all the three parties, we could have won more than 100 seats at the time,” says party spokesman Vaman Acharya. “But when we joined together, we really felt that the strength has come back.” The dissension, however, persisted. It was tolerated initially, says Acharya, but with elections close at hand a firm message has been given. “The app­roach now is very clear: go with Yeddyu­rappa or perish,” he says. 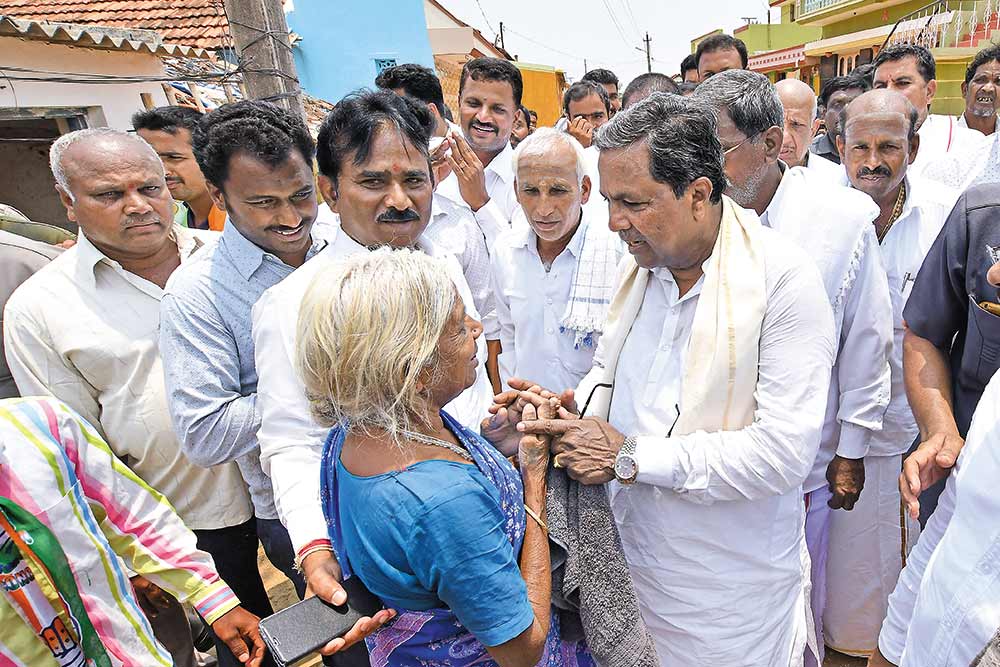 Photograph by Madhusudhan S.R.
As CM Siddaramaiah (in pic, talking to the woman) campaigns vigorously, the BJP plays around his alleged minority bias.

There are both pluses and minuses in the BJP’s centrally-led campaign, points out a Congress leader—ironic, because the latter is now relying on its local leadership under Siddaramaiah. “Because they are in power in the Centre, they have enough resources and all that. The minus side of things is that everything is decided at that level, not here,” he says.

Shastri says that for the BJP, Karnataka is in some ways different from Madhya Pradesh, Rajasthan or Gujarat—not least in terms of the sync between the local units and the central leadership. “They did not have a past that they had to be worried about. But that’s not the case in Karnataka,” he says.

The BJP’s campaign in Karnataka has a strong Hindutva focus, especially playing around Siddaramaiah’s alleged minority bias. “The AHINDA politics which the Congress tried to do became more of a Muslim politics,” says Acharya, referring to the Kannada acronym for minorities, backward classes and Dalits, which represent the CM’s key political plank. However, the BJP is up against a combative Congress, which is playing to its strengths and looking to trip up rivals, chiefly Yeddyurappa, by wooing the Lingayats with a minority religion status. “When all this discussion started about a separate religion, we kept quiet for few months. Everybody thought we were in confusion but it wasn’t. We wanted people to understand that the same proposal has gone several times to the Centre and returned. It is not a workable proposal,” says Acharya.

The party’s Hindutva narrative is especially pronounced in the coastal districts where it has a strong following and yet didn’t do well in the 2013 elections. For instance, in the entire districts of Udupi and Dakshina Kannada, the BJP was left with just one MLA apiece. The situation was no better in Uttara Kannada. Leaders admit the party had made mistakes previously, leading to a disconnect with loyal workers in the region. But that won’t happen this time around, they say. The ruling party counters that claim. “Unfor­tunately for them, there is a dearth of local leadership in the region,” says a senior Congress leader.

There’s a slight paradox too—a Karna­taka quirk of sorts. In successive parliamentary polls, the BJP has been doing better than the Congress even when the state’s assembly elections hadn’t gone their way. “We are more organised; more in number now,” says a senior BJP functionary about the party organisation in the state. “We were not there in about 45 assembly constituencies, while the Cong­ress was present in all 224 seats. That has been changing in the last five years, he says, adding that there are only about 10-15 seats where the BJP may have a low presence. The ‘last-lap’ running capacity, he reckons, was usually with the Congress when it came to assembly polls. “Now, we also can take it to the wire,” he says.