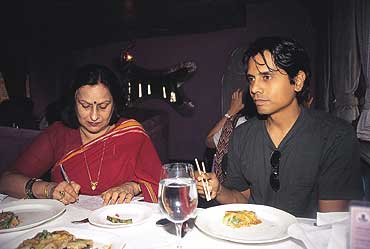 outlookindia.com
-0001-11-30T00:00:00+0553
I’m almost late for lunch, held up by calls from two friends "dying to meet" Nagesh Kukunoor. These are bluestocking ladies, and it makes me wonder: is the nri filmmaker the thinking woman’s new crumpet? Kukunoor breezes into the Oriental Octopus at the India Habitat Centre much, much later. And such is the charm laid on ever so lightly, like butter spray, that the tardiness is forgotten and we plunge straight into the menu.

Kukunoor feels "noodley" that day. But didn’t he just say he was a serious foodie: "If I hadn’t been a film director, I’d have been a chef. I become a hound when I go to a new place—not just the ruins but to the local haunts in town, the holes in the wall." The noodles are not a gastronomical whim: he believes they’ll counter jetlag’s effects. The director-actor lives in Atlanta, Georgia, and is now all set to move to LA, close to filmi mecca Hollywood.

The gods must love him. Not only is he thin like a reed, he now gets to combine his two grand passions: food and cinema. You guessed it: his next film is about food. By this time the Singapore noodles have almost disappeared and he’s digging into my chilli-hot Thai chicken and basil. He loves Thai and Mexican food but Indian food is his absolute favourite. Especially tandoori: "There is something about flesh roasting." So, it didn’t take too many of those leetel grey cells, as Poirot would say, to come up with the title of his forthcoming film, Tandoor, "synonymous in the world with Indian food".

Yummier still, Kukunoor’s got Amitabh Bachchan cooking: the man-for-all-roles is going to play an owner-chef with a small restaurant in the film which will be set in Manhattan. Since food and sex are two basic instincts, Kukunoor will combine the two in the film. "Bachchan plays a widower. It’s an old-fashioned romance with a white divorced woman, a lawyer. It’s really about two people in New York trying to find a common ground." Like Jack Nicholson and Helen Hunt in As Good As It Gets? "Yes, never thought of it like that, it’s Mr Lawrence meets As Good As It Gets."

Back at the Oriental Octopus, we’ve come to our last frame: dessert. Those noodles seem to have done their job. We now tuck into Chinese toffee bananas.

Trash Of The Fortnight: City Roads