'None Of The Above'

Their disconnect with elections is not always a function of their station in life, but the venality of politics itself 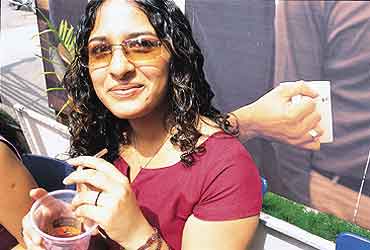 outlookindia.com
-0001-11-30T00:00:00+0553
These are the people everybody else loves to hate. A designer-labelled, body-pierced generation that believes that roti, kapda aur makaan are no longer basic needs, just idle concerns about calories, cuts and carpet area.

They’re the young urban Indians who live in those bits of Bangalore, Delhi and Mumbai that other people come to gape at. It’s easy enough to dismiss them as effete irrelevances in a political world where Dalit is the meaningful class affiliation, not Dolce & Gabbana. But are these people really just self-centred, or is their alienation a sign that the political process has failed them, because it holds no resonance for them?

Bangalore: There’s a buoyant group in a chic open-air restaurant on M.G. Road. Sindhu, 22, who has just returned from New York, sends clouds of smoke over the table and into her hair. She is studying for a bachelor’s in computer applications. Malavika, 18, nose stud flashing in the light, says she wants to study journalism in Delhi and Sajith, 25, has joined a multinational bank.

Their conversation is more serious than their immediate appearance suggests. Bangalore may be their home, but they’re global citizens. Che Guevara, Martin Luther King, M.K. Gandhi figure in their talk, but when asked about clean pavements and broader roads as election issues, they say that’s no priority.

Will people like Medha Patkar contesting add credibility to the system? "She’s just dedicated to one cause, you need to have bigger ideas to run this nation," they say. And why don’t they get involved in politics themselves? Sajith laughs, "You think we can supply booze to voters?"

His smile vanishes, though, as they talk of the lack of transparency and corruption in the system, a discussion that ranges from bribing for a driving licence to "bribing saris" for votes. "This system just does not work," they chorus, followed by an uneasy silence.

When Shibu Abraham, 19, joins them, he adds, "My roommate is in the navy and he tells me about soldiers in Siachen, do we ever spare a thought for them? It is always the politician who grabs the attention, why should we vote for them?"

Malavika has the last word: "Let there be a ‘none of the above’ option in the voting machine and we’ll consider voting." 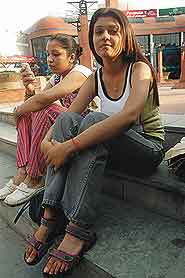 Delhi: Priyanka Bharat, 18, sits on the steps of Ansal Plaza with a friend. Both are pleased with themselves—they’ve had their lower lips pierced today. Her friend goes into instantaneous switch-off mode when she hears the magic word. "Elections? How boring." Priyanka is friendlier, but it’s simply not something she’s interested in: "It wouldn’t matter to me if I did not know who won the elections." What she does know, though, is that her pierced lower lip hurts if she talks too much, and that the elections aren’t something she’s willing to go through that pain for.

Would-be fashion designer Priyanka Awal, who’s out shopping to break some pre-exam tension, says, "I have lots of ambitions, and I don’t think political parties have anything to do with my life. I’d like to see better standards of education, more jobs, more subsidies for travel for students—but I don’t know which party offers them, does anyone?"

Model Indrani Dasgupta could be speaking for her generation when she says, "I don’t think any party addresses issues that affect my career, though larger concerns such as water, roads, safety for women and employment are things I’m concerned about. " But that’s not enough. "I don’t think people of my economic situation and profession inspire much effort from political parties to woo votes".

Mumbai: Revati Sahasrabhojane, 18, voted for the first time and feels good about it but is convinced she voted to elect a corporator (representative to the municipal corporation). Her companions at Mumbai coffee chain Mocha, Arnaz Mistry and Gayatri Thakkar, wanted to vote but their names were not on the voters’ list. They are sure the election was to elect mlas for Maharashtra’s state assembly.

So what then are the assembly elections to be held in October for? Quizzical looks are exchanged. Those elections are for the Rajya Sabha, tried someone.

These first-time voters have prepped on more newspapers and news channels than ever before. While they picked up on the juicy bits like constant chat show brawls, corruption (though many could not name a single scam), lack of principles and, of course, results, they weren’t too sure of election basics.

At least they had tried to vote. Several of their friends had used the three-day weekend to leave town. Those who stayed behind were upset to learn that there would be a 48-hour dry period during polling, ruining a perfectly good holiday.

Politics, they say, happens in a world far removed from them. As young people trying to make it in hyper-competitive urban India, they feel detached from the noise of cow-belt politics. And while the media makes much of their lack of engagement with politics, they say mainstream politics has never tried to engage them either. "I have never seen a candidate come to college campuses," says Ishita Mukherjee, 23, who went from Bombay to Pune to vote.

"Whichever party comes in, my life will not be affected in any way," says Sriram Vinjamuri, 23, an mba student at Bombay’s Jamnalal Bajaj Institute of Management. He and friend Juily Wagle, 23, have not registered themselves in the voters’ list and say political parties make token promises they will not keep so their votes don’t matter.

It’s easy to deride these youngsters for their apathy to the political process. And the contrast their appearance and concerns make with the grim struggle for survival faced by countless less fortunate Indians make them soft targets for anyone with a chip on their shoulder.

Yet they’re as full of ideas and energy, as respectful of ideals, as any other young people. If their concerns seem too close to the West, some of the blame must lie in their powerful desire to seek the fast track to success. But the blame must also lie with the venal politicians and cynical politics that crush their idealism and leaves them feeling they’ll never be stakeholders in India’s future. More’s the pity.

By Samit Basu in Delhi, Saumya Roy in Mumbai & Sugata Srinivasaraju in Bangalore

Political Leaders Have Let Us Down: 75%