From being more powerful than North Block, it has been a slow descent into a 'parking lot' 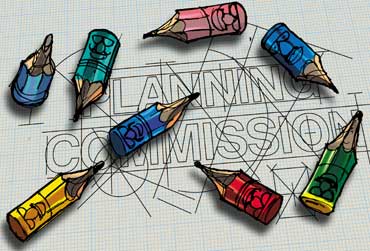 Ex-bureaucrats never die, they fade away. But distinguished ex-bureaucrats only burn brighter. Proving the adage, Nand Kishore Singh—former osd in the pmo—was appointed member, Planning Commission, on minister of state rank, on May 1.

In his scathing critique of the economic liberalisation process of the early '90s, Deepak Nayyar, former advisor in the finance ministry, wrote about the revolving door between the finance ministry and multilateral organisations. Senior bureaucrats with a commendable service record are almost always rewarded with a highly lucrative stint in either the World Bank, the imf or the adb. Of late, a similar door seems to have sprung up between the administration and the Planning Commission, with the latter being stuffed with ex-bureaucrats and smaller ministers waiting for redemption.

So, when former finance secretary and economist Montek Singh Ahluwalia was nominated as independent reviewer in imf, officer on special duty (osd) in the pmo N.K. Singh was sent to fill his shoes. NK had retired from the ias at the end of 2000, after a long and sometimes controversial career in the finance ministry and the pmo towards the end, but his indispensability to the budget-making process resulted in a fresh appointment as osd. But post-budget and post-Tehelka tapes scandal, the Vajpayee government came under rising attack on corruption charges, most of which centred on the pmo. It seemed NK had to go, especially as he was on extension, and since he refused to become the ambassador to Canada, where else but Yojana Bhavan?

But some frown at the trend of filling the commission up with ex-bureaucrats—a parking lot for old Ambassador cars, as one described it. Right now, apart from deputy chairman K.C. Pant and ex-officio members Jaswant Singh, Yashwant Sinha and Arun Shourie, the commission has six members. Apart from economist...