Desolate and without their real protectors, Gujarat echoes with the cries of hundreds of orphans 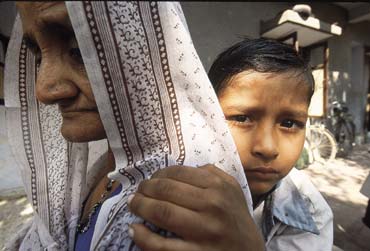 It's early days yet to pin down how many children have lost their parents in quake-devastated Gujarat. Some estimates by Ahmedabad-based adoption centres suggest that there might be as many as 6,000 such children. But reports of a larger number of children who have lost their parents are slowly pouring in. Assessment teams from the government and ngos are also scouring for them. Adoption centres in Ahmedabad are already swamped by calls from couples at home and abroad. They are keen to adopt the quake orphans. Says Vijay Pandit, superintendent of the Ahmedabad-based Mahipatram Rupram Ashram, a 108-year-old orphanage which houses some 70 children: "I have already received applications from couples in the city and Mumbai for adoptions. The phone here just keeps ringing all day." Child Line, a hotline to help distressed children, has been receiving up to ten calls every day from interested couples. But, as Hannah Crabtree of Save the Children, an international ngo working with children, says: "Everybody seems to be in a hurry to adopt. In a few days, the orphanages might even begin receiving a large number of children. But it is important not to rush things and check the antecedents of the willing couples."

Crabtree, who's now camping in Bhuj to collect information about such children, is not off the mark. For the moment, children like Richa are being looked after by their numbed relatives in tatty tarpaulin-and-tent camps that dot the ruins of western Gujarat. Communities have traditionally come to the rescue of displaced and distressed children after calamities in India. But how long these relatives and friends will look after the children will depend on their earnings and caste and community-based gender preferences. Also, pauperised communities who have lost their kin in calamities have a cruel interest in sheltering orphans—the lure of compensation monies.