"No Way Am I Entering Politics" 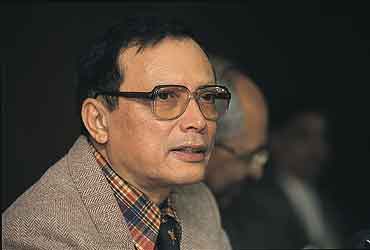 outlookindia.com
-0001-11-30T00:00:00+0553
Come November and Chief Election Commissioner J.M. Lyngdoh will oversee what may be his last round of elections before he retires early next year. In an exclusive interview to Murali Krishnan, the Magsaysay award-winner explains how the forthcoming assembly elections in five states will be different from any other election held till now. Excerpts:

How different will this round of assembly elections be now that candidates have had to declare details of their financial liabilities and criminal background?
This election is going to be different, I suppose, for the middle class. The middle-class voter has gone to the court and obtained this order. To an extent there is going to be much more transparency. Secondly, the law has changed recently. Now, expenses attributed to family members, the political party, friends and relatives cannot be separated from the expenditure of the candidates themselves. We are going to be very strict in assessing the expenditure of the candidates and will certainly note down cases where they have exceeded the limits. More importantly, expenses incurred by the candidates on a day-to-day basis will be put up every third day on a notice board. A copy of his expenses will be given to the returning officer and details of the candidate's expenses will be common property. Obviously, this will form part of petitions in the high court thereafter.

In real terms, do you think the Election Commission can keep a tab on the expenses of the candidates?
There is a lacuna in the law. All we can do now is to note down who has crossed the prescribed limit. And since this knowledge will be common property, people will be able to enter these details in a petition before the high court. But that can happen only after the event (election). During the event, there is no way one can take action.

How will this information reach the common man?
The common man doesn't quite think for himself. He has other people to think for him. If you remember, even Marx said the revolution had to be started by an intellectual elite.

What has been the reaction of the political class to the commission's effort to make elections clean and transparent?
Obviously, they don't like it. They never liked it. They resisted it and legislated an earlier order out of existence. The Supreme Court had to confirm its earlier order.

Of the five states going to the polls, which has been the most problematic in terms of non-compliance with the Election Commission's directives?
It's equal between Madhya Pradesh and what has been carved out of it, Chhattisgarh. Rajasthan has been very orderly and we have had no problems. Mizoram, of course, has been manageable. Delhi has been problematic in a different way...not infringing the model code but not getting the electoral rolls right.

What in your view are the weak links in the country's electoral process?
The biggest offender is the political party. Unfortunately, the code of conduct is the only tool we have to regulate the behaviour and activities of political parties. It is not always adequate, and indirectly the Supreme Court has recognised the existence of this. We will need to have laws to deal with offences but at the end of it, it does not help in the long run.Now, you commit an offence and register a case only after the event. I have been advocating an amendment in the electoral law to give it several anticipatory characteristics like the Criminal Procedure Code. Under this, if you expect somebody to commit an offence then you can take anticipatory action.

How do you determine what is propaganda and what is genuine dissemination of information?
We are not concerned about the distinction between the two. You can't use government money to do this and that. It constitutes an unfair advantage.

Do you regret that you will not oversee the general elections next year?
Certainly not. I will see it as a citizen. I will be only too happy to leave it to somebody else.

Do you have any political ambitions?
No, none at all. No way am I entering politics.