'No Time-Frame On Kashmir' 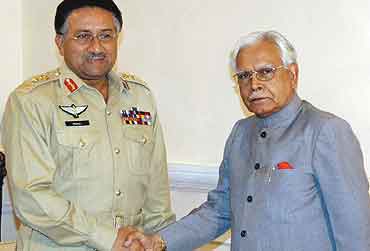 The external affairs minister K. Natwar Singh lays out India's line on Kashmir, hours before Pakistan President Pervez Musharraf was to arrive in India to watch an ODI cricket match between India and Pakistan. Excerpts from a hard-hitting interview to V. Sudarshan:

India has made additional suggestions to back up the Srinagar-Muzaffarabad bus link, like designated meeting points for separated families along the border. Why is Pakistan not excited about them?

We look at the LoC not just as a divide but as a bridge. We need to work towards a situation where borders, even in our part of the world, begin to matter less and less. In addition to the Srinagar-Muzaffarabad bus, we have made additional proposals for cooperation in...