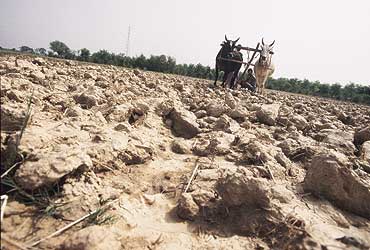 outlookindia.com
-0001-11-30T00:00:00+0553
In Sahu Nangla village in western Uttar Pradesh's Moradabad district, they do not have the Met office to curse. In this sleepy village, no one sleeps. For a month now they have been waiting for the rain. But the skies have not opened up. The paddy sown in the fields has wilted and in all likelihood will soon perish. There is an air of despondency among the villagers. Forty-year-old Mukim-ul-Rahman tells you how he walks to his two-acre patch every morning only to return home dejected. "I have invested Rs 25,000 raised through loans on the crop. I have lost all of it. I wonder how I and my family will survive."

Rahman's plight is shared by thousands of marginal farmers all over western Uttar Pradesh who have been affected by one of the worst droughts in recent years. Unlike his brethren in the conventionally drought-prone states of Gujarat, Rajasthan and Madhya Pradesh who have faced severe dry spells in the past, the farming community in rain-surplus Uttar Pradesh is ill-prepared to handle a prolonged dry spell. "Drought never occurs in this part of the state. We do not even know what to do with our crops in such a situation. We are not at all prepared," says Mahender, a marginal farmer.

There is a sense of disbelief among farmers as they come to terms with the drought. The farmers of western UP like to hear their land being called "Harit (Green) Pradesh", as Union agriculture minister Ajit Singh likes to describe it. It is one of India's most agriculturally-rich regions. The monsoon is taken for granted. And not without reason. "There have been very rare occasions in the past when it did not rain enough. But this time it just didn't rain. Not a single drop fell from the skies. This has never happened," says 67-year-old Angan Lal of Bitri Chainpur village, Bareilly. From Meerut, Muzaffarnagar, Amroha to Rampur, Badaun, Etah and Aligarh, it's the same story everywhere.

The scene is not much different in Madhya Pradesh, Punjab, Haryana and Rajasthan, where the monsoon has been as deficient. In all, there are now 13 states which have been declared drought-hit. And even where it rained last week, it was too late to be of help to farmers.

The general notion that a drought of this kind has never happened before may not be totally accurate if one goes through meteorological records of the past 130 years. But it is true that the drought in north and northwest India is an unusual meteorological phenomenon. During the normal movement of the monsoon, the rains advance towards north and northwest India, sweeping Uttar Pradesh, and then approach Delhi, Haryana, Punjab and Rajasthan. Strangely, this year no strong low-pressure area developed in the Bay of Bengal that could set the monsoon into motion. Only a couple of weak cyclonic circulations that originated in the Bay of Bengal changed their track mid-way to the Himalayan foothills, giving rains only to Bihar, West Bengal and the Northeast.

With the monsoon proving elusive and patience running out, farmers of all religions have put their faith in traditional rituals to propitiate the rain gods. Children rolling on the ground, offering of namaz, yagnas and even women ploughing the fields naked—every imaginable ritual has been performed but to no avail.

Scarcity of water is also leading to a law and order problem. There have been over 100 disputes and as many as six killings reported in Madhya Pradesh over water. The fourth straight failure of the monsoon has resulted in an acute drinking water crisis, besides damaging crops. Over 120 cities and towns in MP are being supplied drinking water once in two to seven days. The situation is no different in major cities of Rajasthan, Uttar Pradesh and even in Delhi, the alarm bells are ringing.

Relief measures like waiving of debt and extending crop insurance cover announced by the Centre have had no impact on the ground."Deferring revenue collection is a secondary thing. First it is a question of our survival. We have nothing to look forward to now," says Kanshi Ram from Piswa village of Aligarh, voicing the sentiment of lakhs of farmers across the country.

Their problems have been compounded by other factors too. While there is good irrigation infrastructure in Punjab and Haryana, farming in UP is rain-dependent. Sowing, recharging of groundwater aquifers and even meeting drinking water needs is linked to a good monsoon. Water supply to western UP has also been badly hit due to reduced release of water from the eastern Yamuna canal at Tajewala barrage in Haryana. According to UP agriculture department officials, Haryana has diverted a substantial share of water from the Yamuna canal for its own use.

The monsoon's failure has damaged the prospects of the paddy crop. UP is the biggest rice growing state. But this season the area sown up to July 22 was just 5.46 lakh hectares, 14 lakh hectares less than last year's coverage for the corresponding period. "Because of no rain, the sowing for rice has not commenced in a majority of the districts," says UP's agriculture director, Rajendra Singh. The sowing has been affected in Haryana as well. Till the third week of July, only six lakh hectares could be covered as against 7.3 lakh hectares for the same period last year. Similarly, the sowing of kharif coarse cereals has been affected adversely in the entire northwest India and Madhya Pradesh. The area covered till July 22 was only 95.15 lakh hectares, down by about 57 lakh hectares from last year.

Besides paddy, the drought poses a threat to the sugarcane crop in UP. Like in the case of paddy, UP is also the highest sugarcane grower, with 19 lakh hectares under cultivation, much of it in western UP. The high water consuming crop can't sustain on groundwater and depends on the monsoon for its survival and growth.

Agriculture experts say existing irrigation network in states like Haryana and Punjab can be used as a support system but can't be a replacement for the monsoon rains. Even if the fields are watered regularly, incessant high temperatures during a drought makes it impossible for the roots to survive for long. Even in Haryana and affected parts of Punjab, paddy is beginning to wilt.

In states like UP and Madhya Pradesh, where the power supply is erratic, the option of drawing groundwater cannot be exercised too often. Further, there are places like Badaun in UP where the groundwater, say farmers, has fallen by about 20 feet this year and even borewells offer little help. "It's a vicious circle. If there are no rains, the groundwater aquifers do not get recharged. On the other hand, if we continue to draw water from the ground, the water table goes down. Thus borewells do not function properly and this impacts on both farming as well as availability of drinking water," says a senior official from the Central Ground Water Board in Delhi.

With half and the most vigorous period of the monsoon over, and the sowing operations already jeopardised, only a miracle can save the farmers of north and northwest India. Further, failure of the kharif crop is bound to affect the rabi crop. "The soil has become too dry in drought-hit areas to support the rabi crop in the winters. We might have to wait for next year's monsoon to start afresh," says a senior official from the agriculture ministry. That's if the monsoon doesn't play truant again.