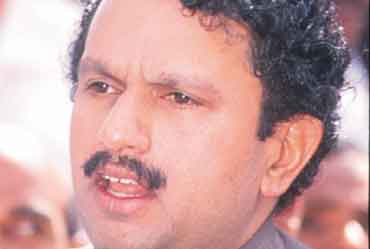 It is a real somersault by you—from de facto leader of the Karunakaran faction to a minister in the Antony cabinet.
The rank and file in our faction was angry with chief minister A.K. Antony. But we were not ready to leave the party. No sensible leader would commit hara-kiri and split the party. So I accepted Sonia Gandhi’s directive to quit the PCC chief’s post and join the cabinet.

It is believed that the factions will regroup after the polls.
My loyalty to the CM and the Congress president is irrevocable. But the responsibility to sustain the newfound loyalty is not ours alone.

You had said Congress candidates would be routed, as in the Ernakulam by-election, if Antony remained at the helm during the Lok Sabha polls.
The poll scene has changed dramatically with the initiation of unity.

In your opinion, is Sonia’s foreign origin an issue?
She is more Indian than many who wear patriotism on their sleeves. She will make a good prime minister.

Does your father share your opinion?
He has never questioned the leadership of Soniaji.

Why did he then announce a new party on January 28?
He must have been under tremendous pressure. But he himself said later that it was a tactic to make his detractors see reason.

Out of the 20 seats in Kerala, how many for the Congress?
Fourteen to sixteen. Not one NDA candidate will make it to Parliament from Kerala.