Alex Paul Menon, energetic and idealistic, was a soft target 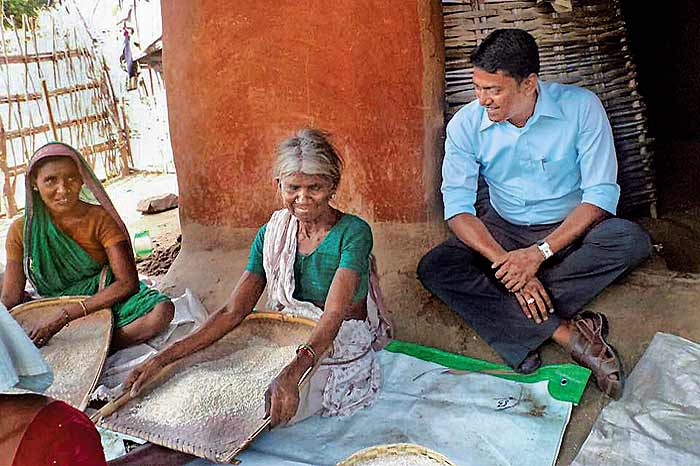 Maoists abducted Sukma collector Alex Paul Menon from Majhipura, a forest village he had adopted and wanted to bring positive change to. It may never become the ‘model village’ of Alex Paul’s dreams, but Sukma town, the district HQ, is certainly seeing its Peepli [Live] moments play out. The hackneyed phrases in which the conflict zone is seen, the instant analysis, the interviews with the townspeople—all the elements of a news buzz are there. Reporters and TV crew swarm the collector’s residence, where Alex Paul’s pregnant wife Asha puts up a brave front. Though worried about the health of her abducted husband (and coping with her own health problems), she obliges requests for soundbites. “I hope my husband is released quickly and returns unharmed,” she says, occasionally breaking down and switching to her native Tamil. She wants visual evidence that her husband is unharmed and being cared for. But former CPI MLA Manish Kunjam, who went into the forest to deliver medicines for the asthmatic Alex Paul, isn’t able to provide that relief. The Maoists did not allow him to meet Alex Paul.

Only a short walk into the forest, along the path Kunjam took to deliver the medicines meant for Alex Paul, evidence of the state’s post-abduction rampage begins to show. We reach Chintagufa, where an old tourism department board declares: ‘Welcome to Heaven’. The cratered roads, the mangled pipes, the few abandoned and damaged buildings proclaim the violent conflict playing out here. In Majhipura, villagers look terror-struck. CRPF troops paid the village a visit after Alex Paul’s abduction and belaboured whoever they could get hold of. Kuram Kosa, Kuram Deva and Marvi Chinge say the jawans clubbed them with rifle butts. At the next village, Kerlapal, villagers say they respect Alex Paul, but the abduction brings attention they don’t really relish. “We now have to put up with daily questioning by both sides,” says Samrath Yadav, a farmer. 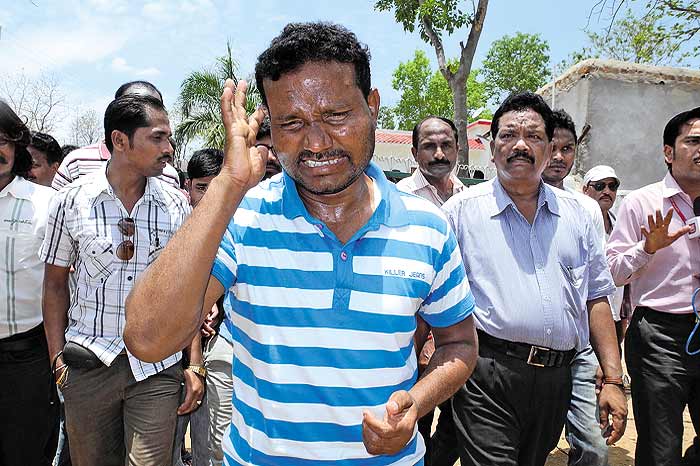 Part of the Dantewada region, Sukma was carved out as a separate district in January 2012. It has a population of 2.5 lakh and the HQ town is home to about 17,000 people. Officials estimate that there are some 1,000 Maoists in the district, plus some 3,000 in the adjoining Bastar region. At any time, they say, Alex Paul is under the watch of some 300 Maoists. As for security, the district police has 800 personnel, there are also 700 assistant constables (earlier called spos) and some 3,000 CRPF personnel. Reinforcement can be drawn from the 45,000-strong state police and the 15,000 CRPF troops, the five BSF and one ITBP battalions stationed in Chhattisgarh.

Fighting on another front altogether, taking welfare and development to these long-ignored parts are district collectors like Alex Paul and numerous lower-level administration officials. In fact, when Alex Paul was kidnapped, he was visiting tribal villages as part of the Gram Swaraj Abhiyan (GSA), meant to popularise government schemes in villages. The Maoist rebels are opposed to the abhiyan, which they say is just another pretext for the Raman Singh government to gobble up central funds. The security perception is that the collectors of Bijapur, Dantewada and Sukma districts are under threat since the abhiyan was launched. The day before Alex Paul was abducted, the Bijapur collector and MLA had had a narrow escape from a blast. 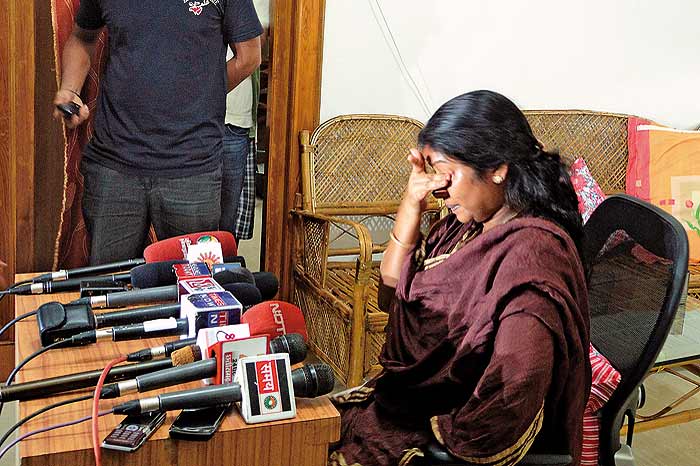 Alex Paul’s wife Asha worries whether her husband is being treated well by his captors and if he’s keeping well.

Despite this, Alex Paul often ignored security norms in his zeal to take government benefits to the tribals of these thickly forested, rebel-controlled parts. En route to Majhipura from Gadiras, about 30 km from Sukma, the collector travelled in a motorcycle convoy of sorts and took a shortcut to Badisetti with some officials. His two gunmen and vehicles took the main route. He spent about 40 minutes in villages deep in Maoist areas. The police say, only about 10 km from Badisetti, Maoists were having a meeting of their own. They are bound to have learnt that the collector was with just two gunmen; it must have been easy for the band of about 50 Maoists to abduct him. Alex Paul had also not stuck to the routine of intimating his day’s plan to Inspector-General T.J. Longkumer. And the provocation for the Maoists might have been his saying, when he halted in Badisetti and spoke to villagers for half an hour, that “I know the Maoists are planning to kidnap me. But I will go on visiting village after village and do my duty. I am not afraid.” Off the record, some officials say Alex Paul did not think much about his security, even travelling by car with his wife from Dantewada to Sukma late at night.

Sukma SP Abhishek Shandilya says top officials or vips usually need a detail of 15-16 armed guards. “If there are fewer, they become vulnerable targets,” he says. “Police had no information about the collector’s schedule of village visits. In a place like Badisetti, an official would need a detail of 60-70 armed guards.” Shandilya, who never moves about without guards, says Alex Paul’s abductors had taken him to the Burglanka area in the Konta block, an area where security presence is rather weak, and is probably being kept there.

In an earlier posting, heading the zilla panchayat in Dhantari, Alex Paul had adopted five villages which he wanted to develop as ‘model villages’. He encouraged farmers to rotate their crops by growing cashew, ginger and other spices. In Majhipura, according to sub-divisional magistrate S.P. Vaidya, the district collector was asking farmers to take to more efficient farming methods when he was abducted. Vaidya dismisses any suggestion that Alex Paul might have been reckless or overenthusiastic. “He was genuinely interested in people’s welfare and that’s what he strove for.” Vaidya also talks of Alex Paul’s asthma, for which he kept an inhaler but never let the condition interfere with his visits to remote villages. Avinash Mohanty, an ips officer who has worked with Alex Paul in Bijapur, says the collector was a hard-working officer and keen to reach out to villagers. “Maybe he could not calculate what he was getting into,” Mohanty says. “It’s not about numbers...whether one has two bodyguards or ten, it makes no difference when you are surrounded by 150 Maoists. Officials have to take into account things such as timing, frequency of visits, routes. They must try not to visit the same place again and again and sometimes go incognito.” Intelligence officials say the district collector had been warned about a threat for the past month. Now, police officers say the drones observing the area have indicated unusual movements in four pockets of Sukma district.

Rama Sodi, the CPI district secretary, says the Maoist movement has gotten stronger over the years since tribals, more than 60 per cent of the population, have been cheated out of basic education and jobs. Earlier, the movement was led by Maoist leaders from Andhra Pradesh, but now there are quite a number of locals in charge. Besides the hardcore cadres, there are 10,000 supporters who provide back-up when called upon. He blames incursions like Operation Greenhunt and the Salwa Judum militia for creating a ‘maaro ya maro’ (kill or be killed) situation in the region. Maoist dalams fiercely guard Chhattisgarh’s rich forest and mineral wealth—45 per cent of Chhattisgarh is covered by dry, deciduous forests—in all seven districts and have opposed most big projects. Some 3,500 sq km of Sukma district, more than 75 per cent, is under thick forest cover. While there is no mining in Sukma district, iron ore is being mined in Dantewada district both by nmdc and the Essar group.

Naveed Shujauddin, the district forest officer, reveals the interesting nugget that satellite imagery has shown that the forest cover has increased in all areas where Naxals have a presence, especially in Bastar region. It’s something those on the environment and tribal rights side of the ecology versus development debate will take pride in. This has, however, made life harder for those determined to take welfare to the tribal masses. The senior officials get heavy security, but patwaris, talatis and other government officials have to learn to avoid landmines, booby traps, kidnappings and random attacks. They are on their own every time duty calls. While Maoist abductions and killings are common here, it’s former Salwa Judum leaders—about two dozen have been abducted and killed—who have so far been targeted. This is the first time a collector—a high-value target, in securityspeak—has been abducted in Chhattisgarh. A senior police officer calls it a “desperate measure” on part of the Maoists because they fear the growing security presence in the area. The battle of wits to secure the release of the much-liked collector is only just beginning. 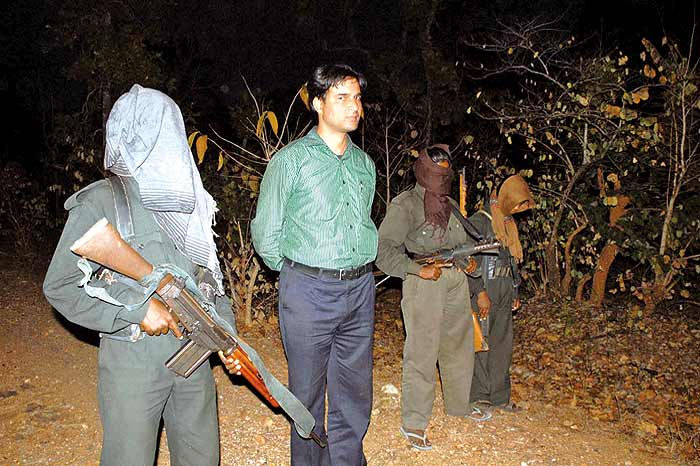 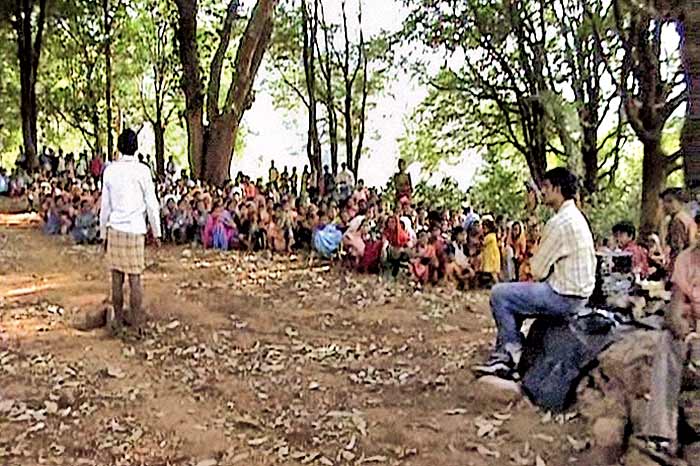